A Week of Decisive Suffering by Advancing Center 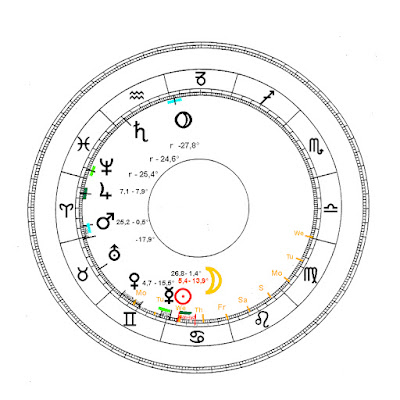 "So there was found the first knowledge about
legitimacy and regularity of the soul  of all things
in the stars, and another in the unknown matter."
C.G.JUNG,  Der Geist Mercurius, (The Spirit of Mercury)
Coll. W. 13, §  285
The § 286 in
JUNG in  vol. 13 recognizes by the cooling Aquarius-spirit, the human I and it's projections, with which it unvoluntarily fills all unconscious space

"To the projection always  adheares something of the carrier of the projection, and if we even try, to intregrate into our consciousness what has been recognized as psychic, and with this also we will succeed in a certain measue, so we will thereby yet integrate something from the universe and it's materiality, or  rather we will, as the cosmos is infinitely larger than we are, be assimilated by the unconsciouness.

"Transmutemini in vivos lapides philosophicos" ('Let's transmogrify into living philosophical stones') calls an alchemist, but he doesn't know, how infintely slow a stone is present, i.e. he doesn't wish to know it, course he might surely, as bustling European, believe to choke on this knowledge."

Currently it is the slowness of the Russians in their advance in the Ukraine, which shocks the entire west, with the paradox, that their advance is slow, but their arms are the fastest and most precise ones. That's hinting to Jupiter in Aries space of hunt and attack.
In the Greek mythology it's the son of Zeus, Apollo, who is wielding the infallible 'far-carrying' silver bow, by which he punishes the breaker of divine law. In Aries, Jupiter is transporting Mars  the igniter.
In old days called 'Kriegsglück' , fortunes of war. But, so PARACELSUS there is no luck, which hasn't reason in virtue.
This week till Tuesday Mars still punishes in the Aries-space between the territories,  then he does it in Taurus, i.e. in towns,  agglomerations, conferences, while with Venus the parties in Twins take a raised
location: elementary speaking: after length and width now height, Twins = air- element, the lightest and highest, from where the contradicting intersts are to be surveyed and neutrally to be mediated.
Venus and Mercury, signifying the archetypes in charge of security, balance, curiosity and adaption to conditions now in Twins are in the yearly space for exploration, encounter, mediation between the parties. Thea are mythologicly the two brothers, one mortal, one immortal who eventually share each a half mortality and a half immortality - earth-spirit and language-spirit.
This constellation relegates to a time of sounding and negotiations on higher ground.

united or fighting each other

square by Pluto in Capricorn

with Mars in Aries

in the highted niveau of Twins

talking to the soul

to be noticed by

by his warming  hidden

of 30 grades of depth

sharing the square with

finally at the end of the week

in truth by looking

'looking the other way'

and  still epochal  is

in the mirror of Twins

of Venus and Mercury

as their Archetypes are

Hence three nuts from heaven, cracked infinite times, in the collective unconsciousness of ours - three constellations, wanting to be reconciled in the material/spiritual form of unity of contrarians.