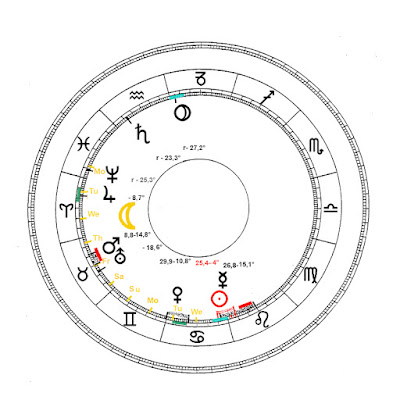 The soul
" ...  never looses its middle position.  She therefore has to be
addressed as a function between the conscious subject and
for the subject  inassasible depths of the unconsciousness.
The determining power (God), acting out of these depths is
depicted by the soul, i.e. it creates symbols, images and self is
only image. In these images it confers the powers of the
unconscious to the consciousness. In this way  it is a receptacle
and  bridge, an organ for the perception of unconscious
contents. What it perceives , are symbols. Symbols however
are formed energies, powers, i.e. determining ideas, which have
a spiritual  as large as an affective  value."
C.G.JUNG,  Psychological Types, Col. W. 6, § 466.
In the images of a mundane horoscope the  powers in our collective unconscious heritage step in front of our consciousness  as a chain of 12 essential symbols, each with 12 'houses',  that is the basic assumption of the mundane astrology, that is God's living  'machine' nature.
This collective raster of formative principles , adapted by sea and mountains, plants, animals and humans, JUNG has called 'archetypes' and asterisked them as 'psychoid', i.e. - ' oid = 'similar' to psyche,  'alive' and equipped with energy.
He accents, that with children and primitives the archetypes posess their immediate effect,
guiding  all weathers in a cosmos. While the modern humans, having forgotten  soul,  replaced it by reason, a smart adviser and a horrible ruleress. Her tool, the intellect has, so JUNG, placed herself in the modern time on the throne, which not she deserves, but the heart.
Mundane astrology has to delve along the parallels of of our cosmic constellations by our star-famiy and the collective behaviour of nature, humans included. As the archetypes contain, so JUNG, highest and lowest 'magic',  the constellations indicate the intensities of  collective 'good' and 'evil' possibilities in each time.
The former are due to the human adjustment to the discipline of what the old Hindu called 'Rita':

" [...] also the Indian sources deliver to us the impression of a lawful occurence, by identifying Brahman
with Rita. What now is Rita? Rita means: fix order, determination, direction, decision, holy custom, statute, divine law, the right, true.
It's basic meaning according to the proof of the etymology is: act of providence, right walk, direction, directive. The transpired, contingent by Rita, fulfills the entire world, but eminently Rita appears in the occurences of nature, remaining to be the same, and primarily wake the imagination of a regular return" [...] Around the heaven runs the spoked wheel of Rita, never becoming old, the year."
C.G.JUNG, Psychologic Types, Col. W. 6, § 378

The current worldwide crisis lastly seems to be caused by the fact, that for the first time in history the more powerful part of the world-powers aiming with a policy in accordance with 'Rita', while the other part of the powers persisting in the  tradition of rape of the weaker by the more powerfull, the religion of the Poker-Nation: "The winner takes it all."
29. Week 2022
Mars, the igniter, further moving  on his journey through Taurus. His  place of  fires are in parishes, settlements, cities, in short: Taurus-world = archetype of communities and their confines the satanists of this time are crucified als dark lamb for the entire West.

Mars is igniting, where  traveling Venus is placed.
And the current Mars is one in those 7 years when traveling mangod  Uranus travels in Taurus indicating  'human' spirit above all racial, national, religious,  sexual individuations,  in the meaning of a 'heavenly', i.e. eternal human order, according to Rita ~ Capricorn.

Note.: The western world and  Mars, the predator. The West, heiress of 5 centuries of exploitation of the young/old peoples by the 'modern people' on Earth,  by the private- pirate-civilizations of the west. These now suddenly since  February 24. find themselves in a hopeless position, while the East, led by the Russian/Chinese 'double-helix' has placed itself at the side of the young/old civilizations of Asia,  Africa and Latin-America. They are damanding respect, for the  dignity of the given originalities, traditions and religions of all people, their great heritage,  and their great and small states in an ever since  multipolar world, and by that - with respect alone - the West can - if anything - find the very first corn for it's own convalescence - that is: of the world.

Venus comprising, delimiting and holding gravity the position of balance into which, she after disturbance, inexorably returns.

Since Monday this week the Venus-gravity finding herself in Cancer,  in orientation towards inside,   to  soul,  family, feelings, according to Moon on his ambulation.

And, ruled by Venus, now Mars, and ruled by Mars, now Jupiter and his precision and overview, are moving in Cancer's , intimacy.

Increasing to the end of the Taurus'  Venus  awaiting the square Jupiter/Venus, the intensity of 'cognitive dissonance by connection of precise violence and domestic intimacy - what medicine the good and the bad ever will make of it.

Mercury, the neutral in the tribe distributing the prey of the hunt and the year. Therefore being created, for the neutral positions between the interests of the parties.

Here  the worldwide western disease of corruption: the bought Mercury in the shape of neutrality.

To him are  two 'realms' Twins and Virgo ,  air- and earth-condition,  necessary for  world and soul, the word and the win.

Well Mercury yesterday left Cancer and entered Leo. No more  to Moon  subserving, but now to Sun, no longer night but to day,  he, the heavenly consultant.

Sun in the dyad with Mercury, sovereign of the day with smart precursoy advisor,  today  in demanding resonance with sacrificer Pluto,  in the complementary opposite state (State etc) Capricorn.

From 'Rita' a mighty resonance by state to the lap of us single beings, from the sacrifice for the community to the inner clue of sovereignty of the individual.

The element of pain and heat, Mars,  increasing to the weekend, the square with : Sun/Mercury in the coincidence of Taurus and Leo, community and individual pecularity, and group-membership, whereby the former is marsian charged and has to mirror the spirit of the coming father Saturn in Aquarius. 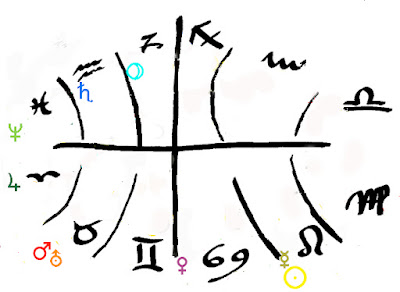 Since Friday then the Sun at home  in the power and heartiness of Leo.