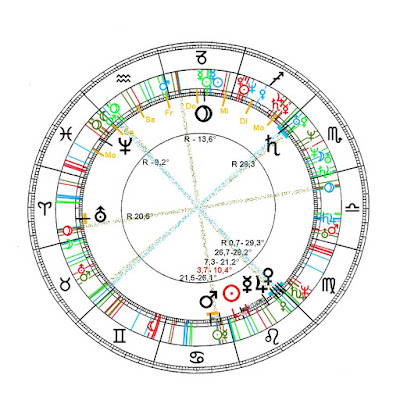 
After this general one - now a slice
on Monday afternoon  27. July 2015 where at the moment never suspected
sickness circles close
and measure is seemingly taken on everyone
anytime according eternal merit
but sometimes seemingly the circles close

Here is another week laying on mundanomaniacs table:

Above: the bright day-version, if you click: the nightly seeeming Version in conscious brightness.

The week starts with the nearness of Mars - and Uranus - resonances. They carry one the beginning and the other the nearness to the god ship.
And now the fact is to consider  that Mars moves over 1. the earth-Sun of our aeon which celebrates her birthday - together with e.g. Angela Merkel - on 24,5° Cancer and 2.  over our earth - Mercury coming Monday on 26,9° Cancer.
Ergo inception and Cancer-power which is the power of the anima - archetype which sparks enticement for life to the inertia of earth

Sun radiating sympathy above the heavenly sandpit
another three weeks until ...
what Mercury already undergoes over next week
stepping into the Saturnine Summer-Drama 2015
entering the chariot to accompany Venus and Jupiter who are
intensively concerned with the far god - member Saturn
Saturn in Scorpio strongest medicine, strongest concern. A huge circle designated to the meaningless lifestyle, which is cutting out the end and hence the father, who in the idea is waiting for the poor man.

We solely live in pictures, Jung writes somewhere. Pictures in the psyche. Psyche encompassing time and space and within the collective pictures of the impersonal soul - called "Selbst" - in the person. ( like: receivement, to beget, to guard - where only by this the person  becomes besouled.


Is it Saturn in Scorpio,  is that the bitter medicine of sickness, pain and recovery that heaven serves the father-forgotten mankind this summer, to teach measure.
And those, who keep image and center in the fatherly heir - square the circle?

And with Jupiter in the last quarter of Leos realm the god of conciliation treads before the altar of the solemn fatherly resonances  in grateful presence of the beloved , as which the earth is almighty
in the heavenly shape of Venus which will be returning for another time in passion until fall.


And Moon notifies ...
Brightness  in the dream-sequence of clear images out of ... no, far from it. Moon "walks" through the spirit, that is to be said following the signs - until Pisces on Sunday. But what is it in us, that is walking with the Moon?
Their way is open  even for description. But what is it, walking with the Moon? The soul? Not space, not spirit? But connection?
Now connection walking in spiritual part of the heavenly circle?
Tuesday evening then the "connection" would walk into the fatherly phase of responsibility  and maintainment of borders till Thursday night.

When after midnight the nearness of God to the spirit receives the wandering god of receivement - Moon in Aquarius and the soul may now spread over the all its spiritual wings  ... which Saturday night transform  into fins for the dive into the gods world of the Pisces ...