About the Gods-Work of the Unconscious Psyche 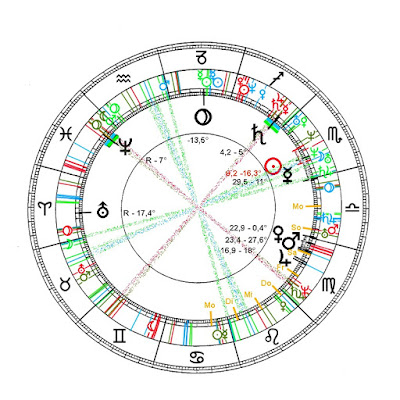 " The realization into the force of the unconscious is only then to conciliate with the aspiration of "higher humanity", if ... beneath the dark and evil unconscious, that about Freud conceived as bubbling cauldron filled with primitive sexual and aggressive wishful drives, also in addition a "higher unconscious" is conceptualized, a psychic agency whose potencies rest above all that patty and narrow rationalistic mind activity".

Further on  he writes on the trace of the C.G.Jung of 1911 ("Titanic" - year) while whose  study and description of the prelude of a psychosis, (ed. Engl.: 1956, Symbols of Transformation)

"his outcome is, that the unconscious, [...] psychic activity of the sick person work at yielding on an own God - imagination, not adding up in the mastering of a clerical dogma. The Gods- work is expression for the unconscious strive of the soul, to come out of the chaotic manifoldness of the drive impulses to a inner unity [...] and thereby to constitute a personality kernel." Paul Ernst, ibid.


The "higher humanity", cited above,  accompanies as "spirit"sure enough,
invisibly like air, everyone, thus also the author
and the readers of this blog from the beginning
under the signature:

today what to begin with Monday afternoon

and Mercury is today on Monday where Sun was recently
with the virtual old "green" soul - gods of  water
Saturn and Jupiter of 1305
invisible present here at 0,8° in Scorpio
since centuries decisive for the inner of all times of the present aeon indwelling the collective psychic landscape
in which the God-work of the soul of every individual is taking place


and further with Mercury
the talking voice
this week on Friday visit at
"green" Uranus of water element in 7,1° Scorpio
home of spirit
origin in opus
of the individual as spiritual substance
of the aeons soul

and Saturday Mercury with "blue" Moon of the air
at 8,8° Scorpio
the young spirit's
bed in the new years night of 1980

and finally Sunday with Mercury at
10,5° Scorpio's  "green" Neptune
waters infinite goodness
of a god's element