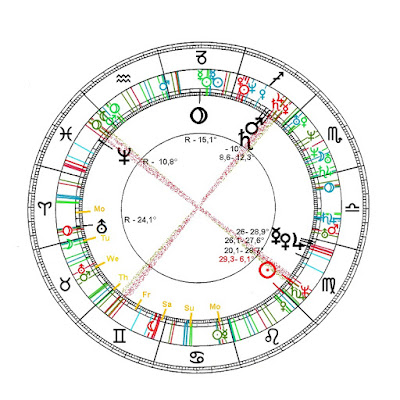 Solo Sunny on Monday
for the farewell of Leo Sun on this Monday
after this male-symbol - heart - month
be reminded that since ancient times
and in the (European ) medieval times
it was a given that Sun = heart
in numbers:
1 center
5. sign
two lions = 5+5
10 = King and Queen in conjunction
= the center
and thereby the symbol searched for
fire -  center - strength
we so urgently are in need for


And the ten-thousand things appear to the astrologer, even a child can follow, ordered by a
disposition in the zodiac, which is a projection of our pre-writing south-eurasian ancestors.
A "projection" in the sense of the psychology is a statement of the unconscious depth in each of us is a statement about an "unknown" , in the belief we know it. It's a knowing without knowing called intuition. Intuition is a gift and a problem. The "images", the intuition receives from the dark within are something, with which our zeitgeist-consciousness doesn't reckon. So consciousness presents us a projection in which the deep players underneath are =0
With the heritage of the zodiac we enter a spiritual world in which the four elements are ordered on three floors, in which like in the periodic table the places are never changing in the wheel of wheels, we are living in.
So the  conscious astrologer, the conscious or partly conscious "alchemist" man, is  currently in resonance with
Uranus in Aries
God of man  in elementary extension
so the alchemist is mirroring in Aries
the  spirit of God
in the first mirror of Pisces/Aries

Saying reaching over weeks and weeks: the overthrower Uranus, heavenly sponsor of the alchemist man on his 84-years-circling through the elements on each of their three floors around the center and the eyes of this man-God has seen this week's  farewell to Leo by Sun farewell of the heart to the the glowing center  and no longer calles Sun the children with an abundance to give out of central strength  into life, but now the children with an abundance of thoughts concerning the middle floor of the elements in which the soul handles the dough.

and so it happens to  conscious beginnings and ends what happened since the beginning of all beginnings  far under awareness and so in the neurotic rational consciouness of the unconscious alchemist man there is no paradox unity possible but in life constantly.
finally to our anchor in the night and his dreams of the beach
and up on the vineyard high over the stream
Moon  in all her felt half-truths appears in the night and against morning and yawns
in daylight mostly invisible under the sky and over the man-world


and till Monday midnight Moons dreams were expanding by energy

till on Saturday before noon then dream and anchor move back into the soul of the elements
being to find in the lap of the elements, Cancer, and which lap, after a full week at the basement of the elements not  will not be left by Moon till next Monday.