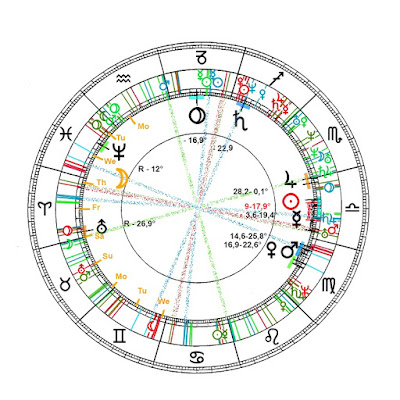 This is  a Mars/Venus week. With a Pisces-ascendant this week children
are born which  in the 7.th house (of encounter and imagination) are
provided with the stride of fire and earth, aggression and defense.

Adolf Hitler had this constellation. Having been a Libra-ascendant (= imagination-type)
with Taurus -character and Sun in the III. quadrant (=imagination-quadrant) house 7 (= encounter and imagination ruled by Aries and the imagination is obsessed by concepts of territory (Venus) and aggression (Mars).

He would have deserved to be in a mental hospital for the studies of young psychiatrists. 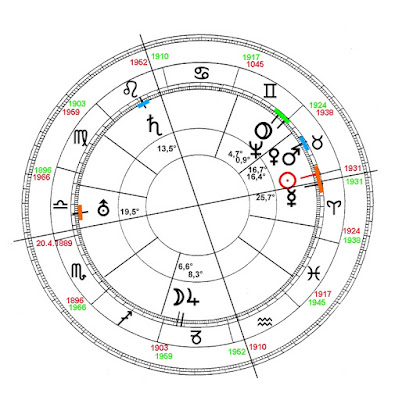 Back to the week:
Mars the stimulus + Venus the cell
in extreme case the stabbing or shooting
into the tissue
and whatever happens in this week, happens in Virgo - not like with
Hitler in Taurus - with Mercury in Libra in the milieu of encounter.

So much for Mars and Venus and their complex this week is  also connecing their signs
Aries, Taurus, and Libra
hence altogether Uranus, Mercury, Sun and Jupiter
while as wells of psychic wellbeing in Libra and Virgo
they are manyfoldly mirroring each other 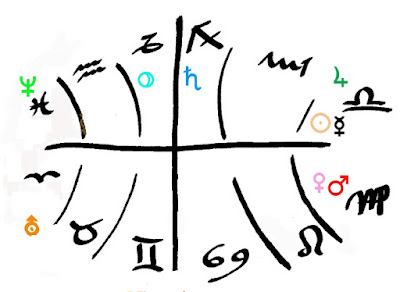 In a comprehensive way it is the mirror-week of the year in which Mercury and Sun in Libra move through the mirroring with Venus and Mars in Virgo, where the balance in pragmatism has to mirror the balance in beauty.

Something els to theese in 'gods' personified principles of stimulus and defense:
For Venus on Monday and for Mars the entire week is taking effect:
the square-resonance with the stern narrow god Saturn
with which Venus has little, Mars therefor has the more so problems
cause Saturn demands of the wild Mars
order and restraint

and another constellation is that of the opposition = complation
of Uranus and Jupiter
= opening and  + conciliation
like in the three weeks before.


Once each year the flock of Sun, Mercury, Venus and this year also Mars
is flocking through the hail-places of the early autumn in zodiac

places like these birthdays of the 'elements'  are the
4 constellations obeyed by the 4 elements,
a rough collective filter
underneath the finer collective filter of the 12 signs
with above them the yet finer individual filter of the 12 houses
the lifetime of such an aeon is about 800 years.
The youngest is that of the latest "Kingsconjunction in a sign oft he element air"
so the official name, fom 12. 31. 1980
replacing that fulfilled one of 1186

3,2° Libra
Mercury +Uranus of the earth-element =
the carrying thought of the power of the guiding flow

and
4,1 ° Libra
Mercury + Mars of the eart element =
the words of stride in love

9,5° Libra
Sun + Saturn/Jupiterof the air-element
conciliation of the heart with the bluntness
of the fatherly Saturn
and the son-like insight of Jupiter


Those blue places in the round of the zodiac are places of the
epochal change in the medium of brain or 'thinking'
(Twins, Libra, Aquarius")
=(intellect, imagination,idea)
these new blue places are severing us from the former gestalt of 'thinking'
cince 1186

since next Monday till mid- October
0,8° Scorpio
Jupiter + Saturn/Jupiter of the water-element
concilliation of the father and the son in the real of feeling
the healing by Jupiter consists in a broadened horizon

and for about four weeks now
23° Sagittarius
Saturn + Neptune of the air
solution of as yet valid yardsticks in thinking
by solution of polarity
the healing by Saturn consists of a waiver of all, what is
too heavy for an ascent


For the bigger part it is ceded to the coming generations, to observe these elementary-'Kings'-places in the zodiac and to systemize the experiences with them, as the current zeitgeist is infinitely far away from the age-old invigorating understanding, that nature without man is very good in getting along, but God seems to be bitterly interested in advances of the overstrained man, but it seems to me that God with his miracles is only to be received in the vicinity of a kind of kindly innocence = Neptune/Pisces, mirroring a kind of 'holy ire' = Aries/Mars of each newborn flame of the hungry fire; therefore: Matth. 18.3:

"Truly I tell you, unless you change and become like little children, you will never enter the kingdom of heaven."

Adult children certainly, natural, trusting and able and in good health. The hypothetical 'hail-grades' of the four Kings-conjunctions might be as analogue to the physical weak interaction a divine weak interaction - "radio-active" places which the heart and other organs are  fine-tuned enough to sense unconsciously. Places in the zodiac which "remember" like our birth-lights-places of our horoscope which are still places of sending and receiving, waiting to be observed by consciousness of god in man.
Elementary hail-grades, at least a hazy notion of them give a hunch for the unconscious extrahuman order in which we are embedded
this secret kalender of the hail-grades
are - so far- only to find in the
astromundan diary and the Mundanes Tagebuch


hail - grades which the spirit of the astrologer in the beginning of working with them
is only able to indicate schematicly but they will with time going grow to
increasingly coloured complexes.

Moon and with her  passive luck
what happens to the soul?