Time for Some Blind Date on Saturday 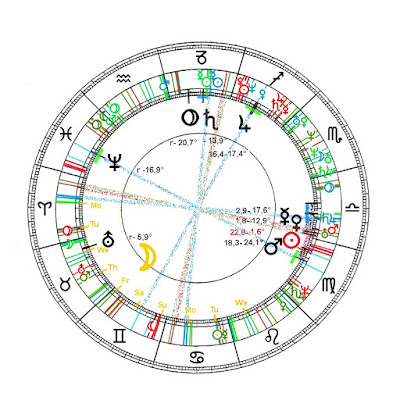 "Reading what never has been written"

Thie  reading is the oldest ... is before all
speaking, out of the  guts, the stars or
dances. Later there supervene conciliatory
limbs ... of a new reading,  runes or
hieroglyphs into use ..."

Walter Benjamin,  a Cancer born and, like all water-signs, going to the roots, ascendant Aries, the oldest layer, the fiery beginning as consume of combustible ...
That's also what this diary is dealing with, which now for more than 12 years (German) and 5 years (English) accompanies the weeks which we live through, before they happen day by day.

The heavenly/earthly image of the beings of the zodiac (all beings) in its immutable invisible order of the year, day, all circles - maybe turned before the beginning of God in the chaos and became light by God's call ...
And never a polarity in the space turned different from all polarities in the space containing them and
Sun and her 'family-planets' are turning in the coordinate system of the galaxy, and referred to spinning Earth this means, Sun and the rest of the family visibly seem to be turning around the coordinate system of the Earth-year, which as a physical given of the world of the four elements exist in the circular canon of  the zodiac.
The latter begins with the four signs/stages of the elementary being, Aries till Cancer. The second four are the signs of soul - Leo till Scorpio - followed by the third four, the spiritual ones - Sagittarius till Pisces.
The second four are emerging out of the inside of the fourth elementary sign Cancer, off it's moistly
area of roots water and out of this dark ground they emerge as the soul-flame of life marked by the fire-sign Leo.
The fourth element as root of the soul, is  water, which in the 'person' of Moon in weekly rhythm  hikes through the four worlds of the month, in this week from earth to fire, from Taurus to Leo. 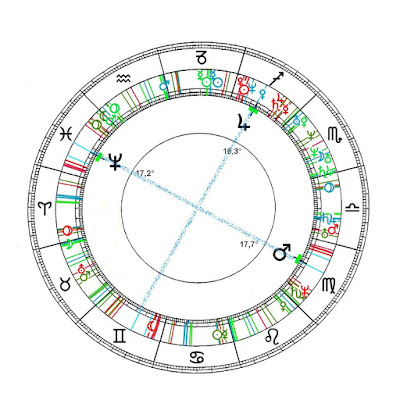 9. 15. 2019 0:00 UTC
The attack on the the Kingdom of S.A. by the Houthis. Mars in perfect square with Jupiter and opposition with Neptune. Hence a perfectly stealth (Neptune) and apt (Jupiter) operation, providing  by the wit of Jupiter's  association with blue Venus of the air - element the necessary balance of the two sides of the conflict.

I have to share something which I haven't grasped, no one has. But we can know, what 'the gods' share with us
this week's
stellar weather
on Earth's northern Hemisphere
our half of
our one and only stellar home in Sun's family

But I'm not allowed, to give tongue the secret, I can only lead into the vicinity of it. If I betray the secret I betray the listener, cause it's magic is easy to be found by a pious soul having learned the meaning of "signs and times".
The family-Talk of the basic archetypes is a story of us and the Sun- family. While only on Earth is the thinking species,  we are supposed to be the brain of the 'family'.

This is, what each human shares with  every creature on Earth and every stone: our  'gods' light or  or Sun's light on planets and Earth's Moon, their  rhythms and their moments since billions of years. Sharing with us the Sun-Family is what  astrology tells.

This is what we have to imagine : the untouched inner areas of the child. Zodiac has it as meaning
in the mirror of being. And  clockwise all is in vibrations emerging from the Ascendant, the world above the heaven and it's mirror-Image below heaven.

Here we have it this week: 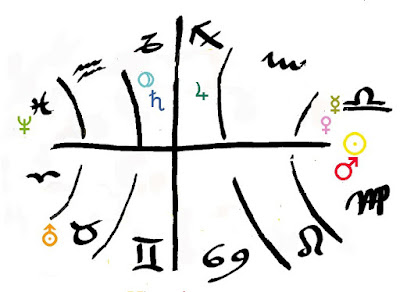 Venus is close to Mercury
and Venus now is at home
Goddess of Libra in Libra
where the basic 'Two' of her command
change the meaning to: 'two Sexes'
cause of harmony and beauty
since her secret
called love
is a secret of Libra
with her two scales 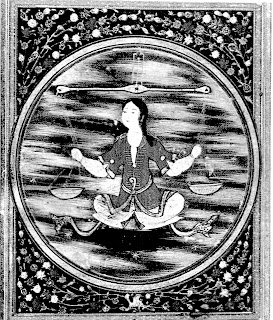 it's a female carrier of worth

"our experience of the unconscious: it is a psyche whose nature can only be described by paradoxes: it is personal as well as impersonal, moral and amoral, just and unjust, ethical and unethical, of cunning intelligence and at the same time blind, immensely strong and extremely weak, etc.This is the psychic foundation which produces the raw material for our conceptual structures.

The unconscious is a piece of Nature our mind cannot comprehend."

... which our ancestors, at the threshold of civilization, where able to save for us in the 'magic circle'
of the zodiac, allowing us to watch with  a structured focus the union or mandala of the unconscious 'weathers' of times. 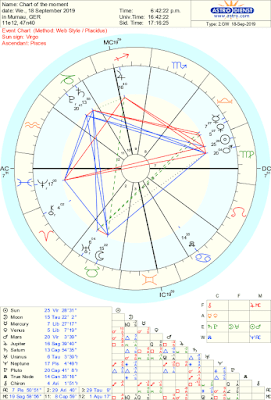