Fire, Earth, Air and Water - the Conundrums of all Four Elements to Immerse Into 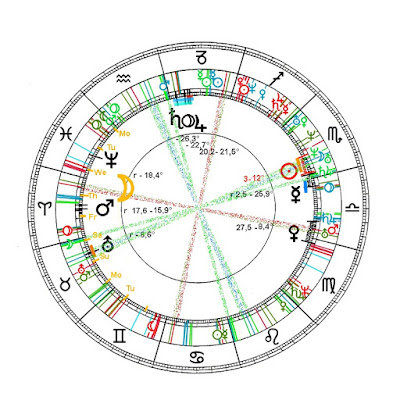 10. 26. - 11. 4. 2020,  0:00 UTC
and under the northern Kingsconjunctions
of the four colors and elements
Fire, Earth, Air  and Water  of the years
1603, 1802, 1980 and 1305
under the Northern Zodiac
(click to enlarge)
1945
"...  the absurd destruction and devastation is the
reaction on the removal of consciousness out of the
state of equilibrium.  Namely there is an equilibrium
between the psychic I and non-I, a religio, a thorough
consideration of the present unconscious powers,
not without danger to be  neglected. This turn has
prepared, following the change of the state of
conscious, yet for hundreds of years."
C.G. JUNG, The Psychology of Transference, Col. W. 16, § 395
The benison of the projections of the "Self": God,  the zodiac, fate, meaning, love, nature, death, eternity, creation ... leads to the fascination by images, which haven't been made by us, but have been found within us, And like archaeological artifacts they deserve finest-most spiritual work of simpleton at the archaeology of the spirit.
The uncovering of the archetypes has become to me with Carl JUNG a daily pleasure, whereby he has left the field of astrology completely untillt. As astrologer I'm quite thankful for his discipline to leave this field virgin.
A chronicler is not, so Ernst Jünger in my remembrance, appointed, to interpret, he has to lead the chronicle. To interpret  are  others called. According to the quiet opinion of the chronicler:
every man and his wife
The un-benison of the by itself saving projection is the danger of redeemer-guises, to which the unconscious  collective fascination tends to follow plausible half-truths, getting addicted on the way leading the pent-up disproportions  to 'solutions' of  catastrophic kinds.
Now to come to the present week. The chronicle of the northern hemisphere embraces the state till the day after the election of the President, or  electoral-King, of the USA.
In which condition is the northern hemisphere?Which is 'leading the planet' politically, when the planetary sea-power again decides it's president?
Just this week an English -language analysis has become ready, dealing with this question with regards to a Cancer ascendant and to the American foundation in 1776. Its a lion, Sun in 4., meaning:  Life ' in reception'. In encounter is Aquarius with Uranus in 10, meaning: spirit of heaven, 'ordaining'. 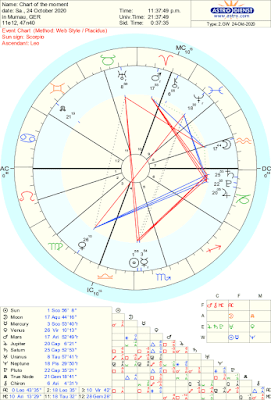 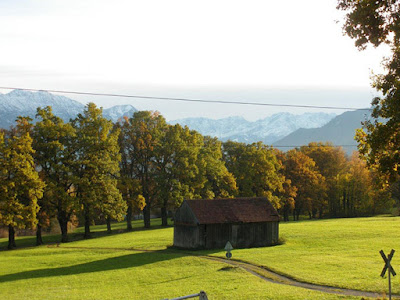 44. Week 2020
Mars
the first
remains at home in the dream-wild
Aries
of the individual animals
where swiftness
compensates
lack of knowledge
this week
further to the middle of
his realm
momentarily
slipping free from the simultaneity
with the collective powers
in Capricorn
Venus
gravity and balance
in Anthropos
Wednesday
entrance in
Libra
back home again
in the easiness of the heavyness
whose simile is
the couple
on Friday
Venus will meet
at 3,2° Libra
Uranus of the earth-element
With Uranus it is the spirit of heaven
each element is containing
which Jesus has told us to pray to
in these words
"Our Father
who art in heaven "
Venus + Uranus
earth & air + Heaven
one day later on Saturday
Venus meets
red Mars
of the fire-element at
4,1° in Libra
first in the
first and swiftest element
fire
attendant in the radiating points in the
psychophysical
mirror
Venus + Mars
earth & air + fire
Mercury
the diacritic godship
in the sensual air- world of Twins
and in the emotional earth-world of Virgo
in the projections on the Earth-heaven
further removing back to Libra
on Tuesday
Mercury in union with
Saturn-Jupiter of the water -element
at 0,8° Scorpio
albeit being  water
marking the highest level of the
element
appears as crystal in the
coldness-projection of the
Scorpio
such as in the love is
the couple
containing everything
in demand
on Sunday
on his retreat
Mercury meets at
24,1 Libra
the blue Pluto of the air-element
waiver of
indulgence
lust
Independence
outside of  the couple
are compensated
by the invisible but powerful
fruit of loyalty
likewise Mercury has entered the maximum-resonance
to Saturn and his company
in the square
Libra with Capricorn
or
presence with beyond of time
Sun
first third
in the glacier-world
of the soul
called Scorpio
binding the success
of the heart
on the soft yoke of love
likewise
Sun
gliding through three
of the forty places
to immerse in contemplation
of  heart +  elements
Time to meditate:
Friday: Sun and Uranus of water
Saturday: Sun and Moon of air
Monday: Sun and Neptune of water
the contents are present
being the given wellsprings of resonances in time
beyond their astronomical timestamp
not accessible for
consciousness
outside of meditative immerse
into the apparent
non-happening in which
nothing remains
undone
further
Sun reflecting heart
in increasing resonance
with Uranus's spirit of Heaven
in Taurus
Remark: The reprimands on 'meditation' have not to be taken to litterally. Each one must and will, so many rebirths it might ever take, get on board into the gospel-train of the zodiac ... get on board and breathe free ... finally (heavenly) order at last!
Murnau, 10. 28. 2020, UTC 17:48.
Documentation: 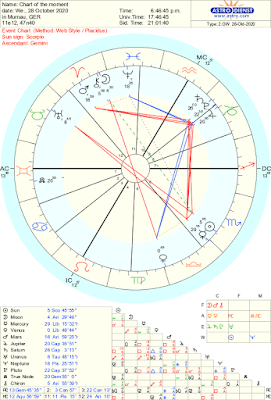