No fog is forever - Towards a People in Fog, Rage and Election

No fog is forever - Towards a People in Fog, Rage and Election

1. The secret of the day
When the election is completed ... 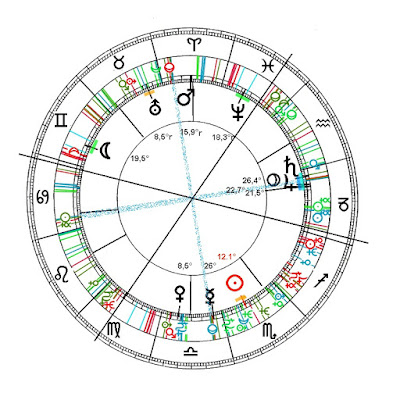 11. 3. 2020, EST 20:00 Wash. DC
Moon in house 12 ~ square Neptune
Sun in opposition with Uranus
Mercury in square with Saturn Pluto Jupiter,
Mercury united
with blue Pluto of the air-element
What a day on the Northern Hemisphere,
Sun in Scorpio 12°
Scorpions are born to be heroes of  soul
the best of them, mostly invisibly, live out, what soul + faith can do. Their Sun appears in the mammal trait of  'selflessness'
feeding the breed by waiver to eat
So the early - November-Presidents of the USA, what is their meaning? Where is it appearing? Whose breed is fed by the Scorpio-Presidents in the USA? Is there an answer in the zodiac?
Generally the meaning of Sun in Scorpio is restricted to the sign, in which Scorpio's Pluto is residing. Most interesting  the 2008-Obama - Election happened, when Pluto was in his last grade of Sagittarius.
11. 4. 2008 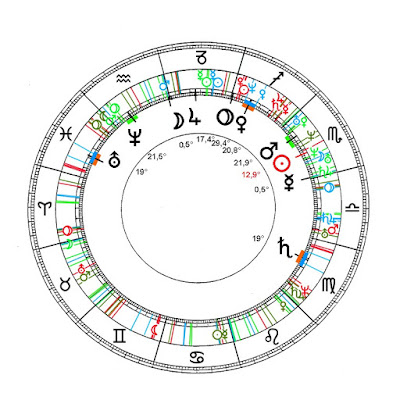 If you read Taurus in zodiac as safeguarding personal possession so  Scorpio/Pluto, as the logical opposite, is debt (to the species) calling for waiver. Now, when Pluto as  ruler of debt passes through Sagittarius, it's to be read like extension. So the secret meaning of Obama's first presidency has been just that: unprecedented extension of debt.
But since then, since 2012 till 2024, all following presidents have been elected in a zodiacal Pluto - in - Capricorn environment, meaning: shrink the debt. As we know, this didn't happen, hence a tremendous disproportion is ever-increasing, waiting for a controlled or  uncontrolled, hence catastrophic offset.
2. The secret of the moment.
In Wash DC the completed election has a Cancer-Ascendant, is a Cancer-child,  like every year the range of same time and place on early November has the Cancer- ascending at the eastern horizon. Cancer? Generally the place of entrance to the inward.  The attention under the rule Cancer is what JUNG called introverted, dealing with all inner stuff  by intimate feeling of intensities.  The next in zodiac,  Leo then does the next step: the expression of 'the inner stuff'.The election's Sun in House 5 (the 'Leo-house') signifies 'soul  in expression' though in Scorpio not of personal but of collective intensities.
The meaning and power of an Ascendant Cancer is restricted to the sign/house in which Moon resides in the moment if 'birth'. 2016 Moon  then was in Pisces, in the unconscious collective meaning before origin in dream and idea.  Together with Neptune, the divine child truth, in house 9, meaning spirit of  time is a peaceful longing for release. 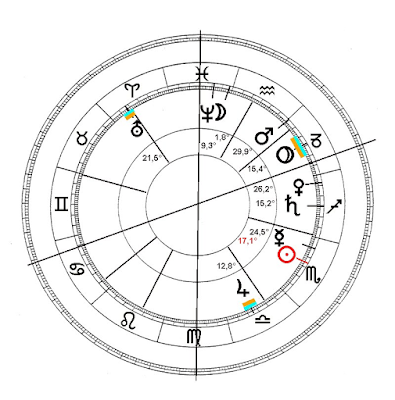 Now this time Moon is in Twins in house 12.   Following Aries = 1 and Taurus = 2 Twins is the 3.
President Trump is born under a Twins-Sun.

11. 3. 2020
Moon in house 12
(12 analogue Pisces)
in Twins
a possibility of talking collective inner
meaning for the future
yet unconscious
not in time
not in the material world
in perfect square with Neptune in Pisces
doubling the fog
ruled by Sun's  urge
to express harmony and overcoming
united in opposition
with 'new (original) spirit' Uranus
So the ship of 11. 3. 2020, EST Wash. DC. is sailing. Further one can see: Mars' new beginnings are still retreat, yet in a waning connection to the demanding great three in Capricorn, under the eternal oak of justice . While receptive time for  isolated Venus to consolidate her social  rule by balancing the given beasts.
Mercury is trembling in the vibrations of   blue  Pluto of the air-element (the only main-connection to the four elements of the day)  urging to  express  the thought of waiver anyone owes to nature and the species in word and picture. Likewise Mercury is in perfect square with Saturn and his attendants.
This heavenly mandate waits to be fulfilled by the American Individual's thinking as natural/symbolic awareness. Until then chaos will remain, where harmony is scheduled.
Within this constellation of November 3 2020 the Earth is spinning full circle, hence the 2° Cancer (like the other 359 grades of the zodiac) shapes 360°-spinning every point on the northern hemisphere with it's being and meaning at each's moment. But Wash. DC. and this grade will have united.
3. The long waves of time and America.
Now, as we always have to deal  with the 'local' weathers of the 12 archetypes or gods of God, calling  their spectrum into reality, being the non-temporal  great heavenly axes of time

'The invisible place in your heart and in the Sun through which God's axis rests and around which  all things gyrate."

And like the relation of Sun-Axis and heart so is the relation of the female womb with the Moon-Axis... the rage with  Mars, the greed of fire,  with Venus the earthly greed of material  security, with Mercury the airy greed of curiosity for Earth and man, with Moon the greed down streaming the landscape of life to be hugged by  smooth cheeks.
We also are subjected under the groundswell of larger archetypal rhythms than those of the moment. We ourselves are a kind of groundswell evoked by our birth. And we are grooving and interfering with the rhythms of the present constellations.
Here we are: reading the 'groundswell' since 7.4.1776, when the Declaration of Independence was signed. And in red as 'transits' we have the current heavenly archetypal 'players' creating intensities with some traits of the 244 years old US- Entity.
Now about the long waves of destination, reaching us in their  resonance-bodies, sometimes like in the WWI and WWII they interfered with the local- in- time- conditions like continuous explosions. The components through time don't change, who can change a planet, even a star ...
Here is the birth-chart of the United States of America and the red arrows point at some of USA's archetypes as receiver of red planet's/lights' resonances of the day.
Note my signs: 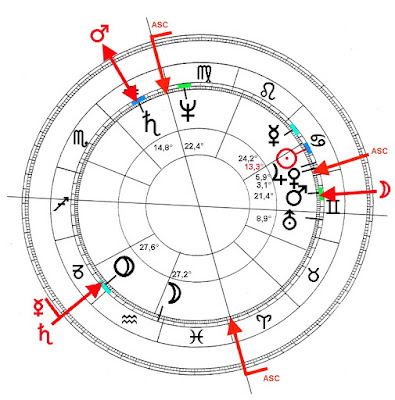 USA 1776
transit
11. 3. 2020
20:00 EST Wash. DC.
The Ascendant is 1° beneath the happy greedy family, the USA has Venus + Jupiter in their complex 7. house, marking the ideas, the imagines of this Federation like bogart wordwide,
further
red Mars opposite Saturn, rage and  traditional superior authority
red Moon ~ feeling, in conjunction with Mars ~rage in the public space
red Saturn in conjunction with Pluto, authority + guard,
in square with red Mercury ~ the media
Generally, the Mars in US- birth-chart's 7th house, signifies aggressive imaginings.

Moon with US-Mars at the evening of election signify people + aggression in the public space (7. house).

(Venus Jupiter can also been interpreted as encompassing greed dominating the imagined world.)
The authority (Saturn) in the Libra of the US is confronted with it' s complement,  wild energy (Mars)
in Aries.
And America's origin,  conspiracy to form a confederation, is accordingly coming spiritually into origin by Scorpio with ruler Pluto in the social second house in complementary partnership with Mercury's words and speeches,  set in vibration by Mercury in Libra and first and foremost by Saturn.
dig that
USA is a conspifederation
which is no theory
What they are and ever
have been
now
is
still traveling the times
And this is the other US_specific chart, showing, what rhythmical intensities the moment of birth, 7. 5. 1776 still is sending, rejuvenated by each birthday in the enlargement of 1 : 7 for seven years each as 'septars 'long as that born  'child' exists. Now USA is in the 1:7 - enlargement of the 35th birthday 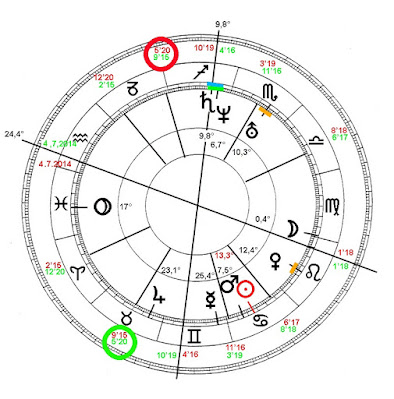 7. 5. 1810,
35. Septar of the USA from 1776
for
2014 - 2021
Philadelphia
Crucial key to the secrets of time are the borders of the 12 houses. They open for 7 months each their spectrum for the sign ruling it's entrance and their rhythm 'awake in their seven months . The rhythm quelling off the ascendant in two directions: upwards aginst the zodiac (green timestamps)  and downwards with the zodiac (red timestamps).
Current seven years are USA are ruled by Aquarius. His distinguished rhythm crawls like snakes on two ways, the upper and the lower way, around the circle. And crawling into the 11. house in each dirction, they are short of finishing next summer, The red and green rings point at the entrances of the second from last house. What does it mean?
It says: since June the green numbers of  ~ meaning are ruled by Taurus through Venus, hence the meaning of Aquarius ~ cleaning the stage for a new picture has reached the spectrum of Taurus, of roots, social connectedness of borders to protect territory. If you look at orange-marked Venus in Leo marking a (semi) sovereign tribe you realize the square- resonance with border-suspending Uranus, lord of the entire Septar. Food for thinking. The creative outcome of a cosmic new/old social stage in mind (Uranus) in house 8, community suspending traditional order of Scorpio ~ obligation and guard. A spectrum of the latter is obviously 'created' by the looting  mobs since  last Summer.
Red numbers of  being: Capricorn pointing at Saturn + Neptune = superior authority in suspension, 'innocent child' as king.
4. The Long Waves from the Elements
"Sure enough we know how often the consciousness applied
interfering corrections to the most central and highest
imaginations over the course of history, but we know little
or nothing  about secular changes of the unconscious
or rhythmical processes of archetypal nature, which one
might happen to  intuit and about which one even has
speculated a lot, albeit without reliable foundations. Even
so one hat to let the possibility open, that the unconscious
anytime can pursue the way of  unexpected self-revelation."
C.G.JUNG, Mysterium Coninctionis, 2, § 182.
Another swell at last
as yet deeper founded in the sea of time is that of the four elements
being the rhythms of the four Kingsconjunctions
of Saturn and Jupiter
the giants in the Sun' family
in the signs of fire, earth, air and water .
giving another main-rhythm, marching from birthday to birthday
of KC in the enlargement 1 : 7 through our cosmos.
I gave introductory notes  in this part of astrology here and here, and many other places.
The basic for  fight and union of the four elements is in my view given by the Kingsconjunction of 7. 17. 1802 in  the earth-element's Virgo.
In the enlargement by the rhythm of 1:7 the Northern Hemisphere currently is submitted to the 32. Septar of the Kingsconjunction in the earth-element.
USA, 32. Septar, earth-element,  2019 - 2026
Since September 17. the red rhythm in being changed into Virgo and and in November Saturn will be initiated. Mercury in Leo in the door to house 2 is ruling the being these seven months. It is the energy of sovereign thinking about social being with a 'left' spinning drive from Uranus resonance signifying the thinking of the 7 house of public encounter.
The release of Saturn will actualize the 6th house-situation which is the fog of Neptune's unconsciousness in the house of prudence in resonance with the Sun/Moon essence in house 12 of the whole septar signifying a possible sovereignty which is still in the unconsciousness of the half-continent, being is a weakness in the superficial conscious world.
The green rhythm of meaning however has entered Taurus and will in February initiate Jupiter. While Taurus in house 10 has the meaning of the idea social unity, and the Venus in house 11 signifies a dismantling of the traditional social fabric, in favor of the origin of a new one, with a benevolent (Jupiter) essence.
Bottom line:
The Moment of the year and day focuses visibly on American traits. A lot of Uranus is resonating on different levels, signifying the 'left' trend in the coming of age folks. There is the significant US - rage-Mars with people-Moon in the public space on election-night.
All this is not new, like the septars since June (Venus+Uranus) and September (Mercury + Uranus) signify.
The 7. house of the USA  with it's complete aggressive egotistic technical - mother-centered imagines
demonstrate, worldwide (Jupiter) that ideas blaze the trail.
For the American soul, to heal  is hence necessary to found a new American federation, and by anyone
who in his soul has founded it, the collective act, to free Turtle Island, is done, an American stranger living in harmony with his  land ,  but alienated from the presumptuous USA of of 1776.
Murnau, 10. 24. UTC 22:37.
Eingestellt von mundanomaniac um 03:15