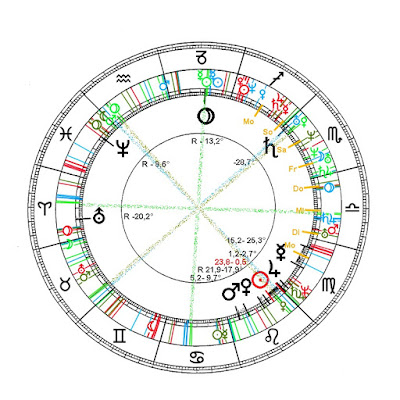 
I just thought about this "Woodstock" then on the meadow of farmer Max Yasgur, mother of all "Open Airs" ...
today third day - before 46 years - actuality remaining uncopyable: Jimi Hendrix plays on this third day one year before his own death the death-symphony of the "Star Spangled Banner".
And after all I thought : third day of this "assembly under free sky" there you have since Tunis, Egypt and Libya in your eyes the Uranus in Aries meaning men in the wilderness, still without bricks and walls, man god under free sky appearing as aretḗ under humans.
In Aries - in the wilderness not yet in the park of civilisation. Park is Taurus behind town walls ... and contracts.
And that is the background  in my astrologer-brain, that when "Woodstock" is brought so near to me like tonight on ARTE (TV-Station), that then the thought-frame grooves around me - the zodiac - which allows to me to have orientation every time since 34 years - allowing the question: "Woodstock" that
freak - event, mythical commencement for all following "outdoors" - "Woodstock" an beginner must be to find in the fire-element.
And, haven't I leaned myself out of the window the last years with: "Fire" is always the beginning - beginning is allays "fire"?
So, and? What does "fire" tell to "Woodstock"?

I yet didn't do the seven-years chunk, called "Septar". I will add that, a short time after.
But there isn't nothing:
The projection of the Kings-conjunction of 1603 on "Woodstock" shows: 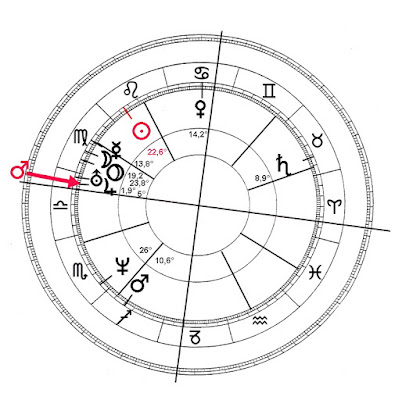 There it is: Projection of the Kings-conjunktion in the element fire on Ritchie Heavens' opening of the "Woodstock"-concert with "Freedom" - a stand up ahead of the 'negro'

There it is, Mars, fire-Mars lord of the red Aries, beginning of the beginning - this is only th have under the free sky ...
Beginning = Mars of what? Answer: Jupiter, son of the father. Beginning of? Reconciliation says Jupiter of all elements, segments of the place, circle, realm. 400.000 young Americans in the lap of self creation.

At the same time: traffic-infarct in NY.

only the heaven
it's lights and signs
stays untouched


and so the world- mad chronicler of the heavens turns to the following week again and refers to his unknown god of the mirrorings of the constellations of heaven on the earth.

This week there is about Mars, Venus, Mercury, Jupiter, Pluto, Uranus and Neptune nothing new to refer.
So we can dedicate our self wholly to the square, constellating Sun with Saturn this week.


Strength and core on one side and determination on the other - Sun and Saturn - together the seek for for the resounding earthly symphony,which mirrors the heavenly symphony which is implemented in the soul of everyone what the awareness doesn't know about.

Good enough for one week.

"Yes, and? Says a Taurus-woman recently, "there's nothing to by for that", and lifted her glass ...

And at that the pure earth-instrument - earth-Venus - overspending the reserves since 1802, which she is meant to keep, at 26,1° Leo - visited by the heavenly center-forward Sun in habitual hot squander of the heart, where on earth will be found suchlike this week on Wednesday?

Saturn in Scorpio indicates to the measure of extra temporal destination in the souls of the living beings securing the generations their eternal place in the chain of the species.

And Saturn again in conjunction with the blue Uranus of the borderless nearness to God together on the station o fthose coming and going, where the genes enter and leave. Here are symmetry and asymmetry together, oak and pine are invited to do a little dance, what a horror for only-oaks and only-pines.


And around the dream-center the soul-cloud is convolving this week
already on Monday evening out of Libra in which
generally the dual for takes effect
giving love the amalgamation - motor
In air-element of Libra however the "wind blows as it will" ...

so airy and thrilling since Monday evening till Thursday morning

then over Sunday the dream drifts in Sagittarius over the circle of realms.