Now in the distance of nearly a week, it's becoming easier to have a smell of history.  What ponderous moment has been this one: Putins speech lasted from 12:01 till 12:25. And Astrology holds that, when a birth is completed, the after-birth-time begins. And that "moment in the conversation of the gods" (C.G. JUNG) is incarnated in accord with the chart of that moment in said "conversation".
It' s  a speech's birth into history - this Moment
Let's have a look what we can tell, "reading" that moment.
In the "beginning" there is only one item on one pan of Libra which has two for the balance.
Astrology calls it "Ascendant"  meaning that grade of the heavenly zodiac of 360 grades, which is rising at the horizon.
So:
Ascendant is all we have in the first moment and all what will become will emerge out of this moment
And for ascendant being the first it is complete unconscious to our consciousness which is filled always with the latest chaos of life.
Yes  identity is stashed in the unconsciousness. And the horoscope opens the mind to this secret: 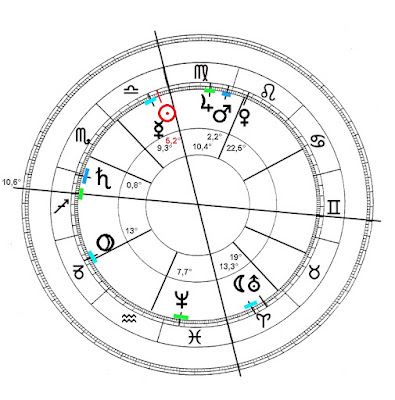 
Ascendant 10,6° Sagittarius
Sagittarius marks that stadium in the circle of life where the enthusiasm for some "non-ego" (Libra) is a done deal and where also the sacrifice for  "non-ego is done. Sagittarius is the next stage. Sagittarius is fire. Symbol is the arrow telling of a way and an arrival. Jupiter is the god and master of this arrow pointed into its mirror-image, which is Cancer = the receiving root of the soul.
Telling about the circles of time around the circles of matter Sagittarius "knows" the ultimate light above each of the  grades thereby being the divine conciliator of the zodiac connecting the comprehensive circles.
Now ascendant 10,6° Sagittarius. First Question: what and where is the lord of this ascendant?
"What"  is Jupiter and "where" is house 9. The ninth House parallels the ninth sign in zodiac which is Sagittarius.
And Jupiter has exactly a square = ~ 90°-resonance in other words; ASC 10,6 Sagittarius is "constellated" with "somebody" else,  psychology calls such a  "complex".
Now: in this case the conciliator is constellated by the conciliator.
First ya identity,  second by phase, thirdly by resonance. This is a rare moment. And, in the chart marked green, there is another square/Opposition with Neptune, adding to the complex of threefold conciliation the innocence of the child.
And the spiritual ground of said Jupiter is Virgo herself,  presented by Mercury on the chair of the judge = house 10,  in a meaningful paradox complex with Moon and Pluto connecting house 10th Mercury the judging speaker,  with Pluto's= sacrifice of territory= house 2 and Moons = the peoples comfort= house 4 in the stride of Aries.
Here is the complete  speech.

The recent one and a halve years have taught us, that Russian politic completely renounces  for empty rhetoric - but acts and when then without announcement and decisively. The Russian  master of  politics is also a master in Judo with a black belt.

One day after his speech the master received the mandate for deployment of Russian military beyond the borders of the Russian state by the Russian Upper House.

One day later the attacks, requested by the Syrian Government commenced with  a blitz on supply and command of the terrorists.

What this turnaround in world politics means, is non uneasy to read if one does a projection of the speech on the horoscope of the USA according to the "Completing Declaration of Independence".
(There are a number of different ASC/times of  'the moment' in use, the following one is that, which is most probable to me). 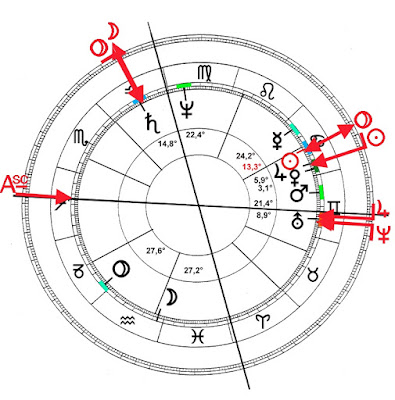 The distance of the ASC of the completed speech to USA' birth is less than 1°, hence Putin has with this speech the horoscope of the USA virtual "overwritten", meaning: the USA are them self by their ASC/identity/predisposition a conciliator of given contradictions by comprehensive insight.

But as, like said above, the asc is always completely unconscious " instinctively"  presence, so the identity is always in the danger of being more or less completely overwritten by the oppositional imagined targets of the consciousness.
These imagines to harmonize the chaos of life are to be seen in house 7. In USA's horoscope the targets
are according to their placement in house 7: Mars, Venus, Jupiter and Sun - with other words: aggression, absorption, comprehensive claim and willfulness.

What the speech of Putin means to the USA is pointed at by the common ASC: The Russian enunciates
what according to the ASC should be the charge of the USA; Conciliation among  the international contradictions on the ground of the UN under respect for  the uniqueness of each national subject of
the international law.

Now the transits of September 28th on the horoscope of the USA showing the situation in which the gods of this day meet the USA:


1. The long lasting opposition of Pluto's (= sacrifice) resonance (and vice versa) on the Sun (= willfulness) in this year demanding the waiver in favor of becoming a ring instead of remaining an ego-complex, a ring in the golden chain  of generations.
2. The square of Libra-Sun's resonance with Jupiter of the USA and her Venus demanding the harmonization of the willfulness of playing the game in town with the needs and hopes of the other legitime willfulnesses in the world.
3. The square-resonances between Jupiter and Neptune and the American  Uranus refer to him as ruler of the third house. Uranus rules out of the birds perspective and overlooks the entirety in the spirit of humanity (-s laws). In the 6th house  however Uranus is subordinated the interests and purposes of the
willfulness.
And so it is without ironies that the USA currently is governed by an actor, whose ASC in Aquarius is on the stage of 7th house and whose Sun is in the 6th house, administering the ruling willfulness. 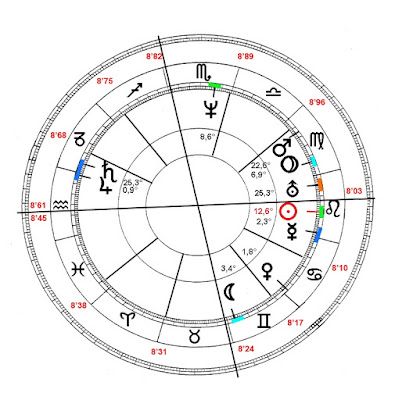 4. Saturn is placed in house 10 and demands under his rule the constraint according to the measure of things, which is valid for all. This Saturn of 1776 has a strict square-resonance with the Sun of the US. And therefore they hate in their willfulness the fatherly self-restraint which however in their Constitution in fatherly wisdom was anchored in form of "checks and balances", the reason why the US-constitution has emerged as a model for the world. The Pluto-resonance demands this kind of American  self-restraint much more, than the self-conception of the American policy is willing  to concede.

In all the way, like the USA currently, essentially co-guided by immigrated Zionist zealots, living a bad caricature of their  founding - horoscope, and world politically stepping from one botch to the next helplessness it becomes visible, that living against the gods is nothing but hybrid self destruction.

But still President Putin thinks not only against but also for them,  whom also the coming generations have to live with and that makes, that his policy is marked by polite forms and the approach permitting the enemy/Partner to save its face. Just threefold conciliation.
.