Your Hun soul
this becoming visible to God

1 Blessed is the one
who does not walk in step with the wicked
or stand in the way that sinners take
or sit in the company of mockers,
2 but whose delight is in the law of the Lord,
and who meditates on his law day and night.
3 That person is like a tree planted by streams of water,
which yields its fruit in season
and whose leaf does not wither—
whatever they do prospers.
4 Not so the wicked!
They are like chaff
that the wind blows away.
5 Therefore the wicked will not stand in the judgment,
nor sinners in the assembly of the righteous.
6 For the Lord watches over the way of the righteous,
but the way of the wicked leads to destruction.

Dream:
I ignite large piles of firewood in the open
tube helpless
ignite  tinder
pieces of wood hissing up
in ignition

To me I ignite a piece of wood in the darkness
and ignited is the whole stack of drywood ...

getting old ... increasing nearer
to the essence
lighting up firewood

number of revolutions
fateful question of Astrology
avertability or
applicability

"The problem of religious experience only then finds a positive answer, if man is willing to met the requirement of rigorous self examination and self awareness. Does he perform his intention, which is in the range of his will, so he will be able not only to reach a considerable piece of truth about himself, but beyond that he gained in addition a psychological advantage: he has succeeded in honoring himself by a sober attention and a compassionate interest. With that he has virtually underwritten a declaration of human dignity in front of himself and at least done a first step in the approach to the foundation of his consciousness, the unconsciousness, being the initial comprehensible fountain of religious experience. With this in no way is said, that that, what is called unconsciousness,were identical with God or set at the place of God. It is the medium to us, out of which the religious experience seems to emerge. What is the further cause of such experiences, to answer this is beyond possible human awareness. The realization of God is a transcendental problem."

Hannah finally, if a scintilla of her looks over my shoulder today at her birthday, can share my delight on what she wrote on March 4 1951 to Jaspers:


"Since weeks now Your "whether Jahwe hasn't disappeared all to much" follows me, without me knowing an answer. As little maybe as to my own claim from the final chapter. Personally I'm hanging in there rough and ready (and actually more ready than rough) with a kind of (childly because never questioned) thrust in God ( as distinct from believe, which always believes to know, thereby getting into doubts and paradoxes). With this certainly nothing is to deal except by being light-hearted. All delivered religion, Jewish or Christian, as such doesn't tell me anything anymore. Also I do not believe, that   anywhere and anyhow it could yet give a foundation for something so immediate political like laws."

... and my delight with that, what two months earlier in a prophetical letter for 1.7.1951 Jaspers wrote to Hannah:


"... - it is not possible to ignore the time and to talk as if today still  where 1945. The Germans in large amount have indeed not reacted. Who did it - You mention only few names - forbid to take "the Germans" as a collective. And as this circumstance  of non-reaction, non shouldering is fact now - a terrible and ethical-  and spiritual momentous fact - ...

there  we are, a spiral of 70 years further, now again - with the fatal heritage of this "fact".

And  your husband Heinrich which i venerate, Hannah, with whom I already shared the most inner nearness to truth, like here, where he wrote on February 14 1956 to Karl Jaspers:

"But the society be it in it's revolution, be it in it's evolution is not able to warrant man, what only the state can issue to himself, the right, to keep oneself the person. The state and the citizen only are they, who can lead out of the undercurrent of the blind human societal - and individual occurrences that little river, which deserves to be called the historical, because it irrigates the realm, on which men can build them a civilization."

People like Hannah's husband, Heinrich Blücher, confirm to me, whats the meaning of marriage, as like as the faithful friend and husband Karl Jaspers writing it - here in a letter to Hannah's 50th from 10. 13. 1956, with which this improvisation about the ways of the Lord, marriage and friendship shall close:

"... You belong to them, who make Kierkegaard's word true: "the woman becomes more beautiful with the years, namely in that beauty, which penetrates all wrinkles and weaknesses, and which is so much more beautiful, as it hasn't anymore the once cheap brace of the juvenile splendor, therefore is wholly different, more reliable, more real." 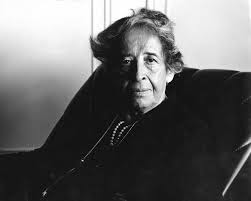