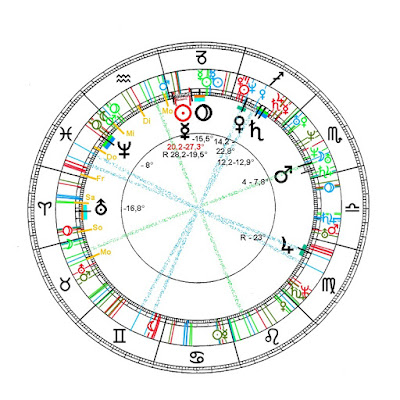 now with the first wave of  Saturn-Neptune-Resonance having it's silent crash
2015
looking back
now
might be the time, to remember what Wolfgang Döbereiner in his sarcasm called
„die Spielwiese“  (play-meadow)
i in his column  "house 10" he
realizes Neptune like
" 1 the benchmarks of the outer life and it's shapes
interdict to the child the to play out
it's sorry "Eigenart"
guildt-projection

2.
Refuge in imaginary "Scheinwelt"
(all English translations refer to bogus, in German the meaning is more
say "neutral")
reservations for Feeling
3

Separation of inner and outer life -
'esse' as an island

mundanomaniac - as Pisces - chronicler with Sun in 10th house
experience these sentences of another  astrologer
- Master Dö to me - as
challenging, the more so in the transmission
into the language of the more or less freaky americans
with their Sakers and Larchmonters and Yves

mundanomaniac has received these sentences
about Saturn - Neptune at the beginning of the eighties
as an artwork of a thinking Pisces
to be called a gem
truth, as like a child talks,  is, like
Döbereiner recognizes
"interdicted" - at least since school - and substituted by
correctness

and mundanomaniac himself
Saturn - Neptune  fools child
- still undivided -
dreaming on his island
which is slowly slowly arising above
the sea ...


"The nature of the delivering symbol is that of a child, i.e. the child-likeness
or presupposionlessness of the attitude  belongs to the symbol and it's function.
This "childlike" attitude brings with it eo ipso that instead of self-willingness
and rational purposefulness  an other  leading principle takes place whose "god-likeness"
is tantamount with "superiority". This leading principle is of irrational nature
wherefore it appears in the shroud of the wonderful ... Jesaia (9,5) "For unto us a child is born!
A son is given to us! He will take over the rule. He is called "Wonderful Counselor", "Mighty God", "Eternal Father", "Prince of Peace".
He will extend the rule and will bring lasting peace 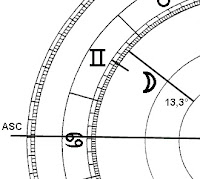 that the collective demands no longer allow a being

Oasis of calm no longer given resp. no longer will be found

are no longer given by the current conditions.

To evade the persecution is no so easy. The enemy is sitting in oneself. (http://prognosefokus.siteboard.eu/viewtopic.php?f=19&t=2308&start=0) 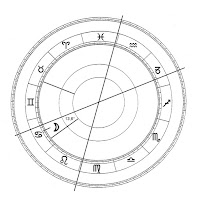 In contrast by ASC-Cancer with Moon in house 1 however the "island"
might be found, which over decades prepares to rise over the sea level
(in German sea - mirror") to become dry land


whose sea level (mirror)?
That of lies, or,  being the same, the being forgotten  already in life


Mars our not always tender door opener unites this week with the old green spiritual god aka  heavenly type of feeling element water  accompanyied by  the feeling of man on his way to the exit . .. to the origin of the former feelings as spirit
Venus our young blue goddess of collection and association within the spirit (air-element since 1980). kisses us this week in her young appearance at 17° Sagittarius - and for her also is awaiting the young blue spirit-Neptune, the air-child of our eon at coming weekend and into the following week to clean the spirit of the eon - watching from the distance. Chance for us passengers of this eon to harken carefully


Saturday.16. 2016Lifting the sanctions against the Iran
Mars with Uranus of water
Venus with Neptune of air
Uranus = suspension
Neptune = solution


Mercury moves on in his paradox run backwards through Capricorn  towards  a final
intensive course of the week in official and "official" message. Good example of the Capricorn-message this week received by Mercury, coming back from the short flight in spiritual realm of Aquarius, re-transforming vision into word, is the contribution of Saker, a former military-Analyst,  in his blog to his worldwide community among which nolens volens also the chronicler is to find, is the contribution of Saker and his  slightly  wonderful commentariat fitting to the activated archetypus of the eon.
Further in the week, further in the five weeks of Sun in Capricorn, the strength of donating of the measure-giving deity in which male shape it ever might veiled.
And Mars in Scorpio opens doors for the loss which,  encumbering the contemporary ones facilliating the coming ones  necessarily.

Venus in Sagittarius collects the insights which become possible for the spirit, if every contrariness is considered as being ordered within the  circular collocation of all contributors.

Jupiter in Virgo effecting the good, the fitting coincidence, unites himself in resonance with Venus to a strong quarter-circle or square of application and spirit.

Pluto and Uranus in their square from Capricorn to Aries keep remaining in resonance between obligation and outbreak of instinct, Pluto awaiting the visit of Mercury backwards.

With Moon the in-official remnant- or main-existence is wandering through the all-weekly routines.
Till Friday again it is the height of spirit, Aquarius and then the depths of hunch of Pisces, which wants to mirroror in being,

then till Sunday noon Moon shares the chase of the young wanting to gain space.

then finally, since Sunday noon Moon shines above the associations for wall- and mural-building for to secure the collections of diligence.