Mercury in Leo - or the Brain is With the Heart 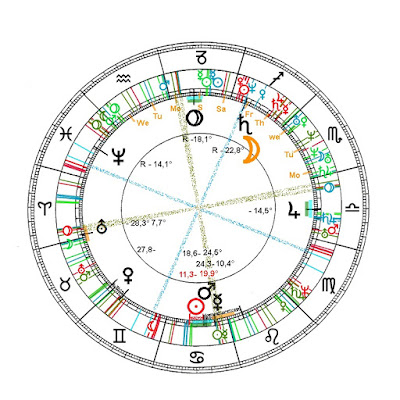 the union of Sun and Mars moves closer
both they are yet in the 'funnel' of a conjunction
which's upper edge is at 7°
with Sun and Moon might be at about 10°
at the moment the are in the distance of 5°
next Wednesday less than 4° and so on ...
their meeting then will be in Leo

Sun + Mars what does it signify?
It's the fire  of the soul
plus the fire of the 'blind' element/impetus
called ire

My techer called it: "the aggression against life", a bad condition for the soul of the child in the family.

Now to the change of sign  element and mirror
this week

two Gods are migrating this week:
from earth to air Venus today
from water to fire Mercury tomorrow

Venus changed from her own reign to that of Mercury
from the partial Taurus to the impartial of Twins (Donald's reign)
which as 'brokers' above partisanship
in the best case offer rules that allow
win-win-situations for both sides
in stalemate-situations
Twins under the 3rd  mirror of constitution = Capricorn
the good ones for a moment
the very good long-ranging
the divine for ever
model: Solon of Athens

And tomorrow on Thursday
we awake with Mercury in Leo 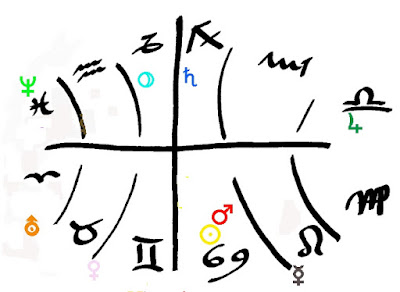 
The poweful archetypes underneath and above of human consciousness, Jung also called them 'segmental personalities' which as heavenly equivalent also are gyrating in us mightily which call us
voiceless to move like streams within their  beds aka to move under the ways of the Gods as children of the highest (Psalm 82) to avoid to become too much addicted to the unresolvednesses of man.
And to do this as simple citizen of a civilized multipolar human planet without any longer falling victim of the "Tukydides-trap", finally learning the lesson.


Now the earth/air- 'segmental personality' of Venus, the socializeress, has moved under the rule of Mercury and his bi-air/earth-character of intellect and adaption. The latter has now the collectors  power to collect the stories that demonstrate the distinctions in perception and to put them on Libra's stage for the education of the king soul.

And Mercury's air/earth 'segmental-personality' hiking into the fire of Leo has to serve the sovereign
expression of the bright center whose symbol is the heart.

Mercury is the God of ways and  spac,e being  covered by him as teller of the differences
hence knowingly, being able to realize the  durable rules, which are to serve the sovereign center
Sun/Leo/ 5th house
the male God of the entire souls family,  whose mother is Moon/Cancer
hence:  the minister is with the king
or the brain is with the heart
for the better and the worse