MINDracle and Surprise: Second Enhancement: the Donald and the Day

astrology's secret:
freedom is a function of order


Sometimes I have talk with myself, have to ask: so, dieter, where are you up to?

So I found my enhancement: The Donald, what are the Gods playing with him, as long as he plays
unconsiosly but instinctively with them. To work with the gods is to work with love and meaning, it's the creative way into infinity

It's a question of Donald's grace, to be able to listen to his inner mothers= aka Cancer aka family, while the Donald seems to be  a certain  kind of immune to the beast ... but until USSATANIC has sunk completely, the small lifeboat army- of love, which more and more will want to enter ... with the 'Dino of the Seas of money' mortaly wound ... 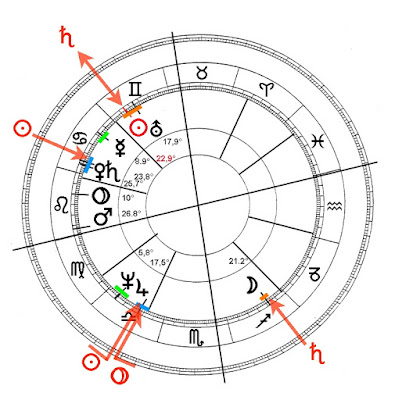 a soul, no less than overwhelmed by the Gods unconsciously, mending the potential-differents in the world,  which, visioned by the demons  applying as impending catastrophies ...,  but by natures loving mirroring the Gods there are the genies of the natures growing on each and everbody's  'lifeboat', waiting for to set sail to where the Gods want one to be, like the Donald did ...havind anything, money could buy, doing it starting with the  initially few that where there to man the boat ...


for the reading of the transits:
Red is the heaven of the day
or the game of the Gods
which is law -
(Book of Judges
is older than Book of Kings)

So much for the enhancement concerning the Gods and the two leaders.