A Wave of Fire and a Start of Liqudation 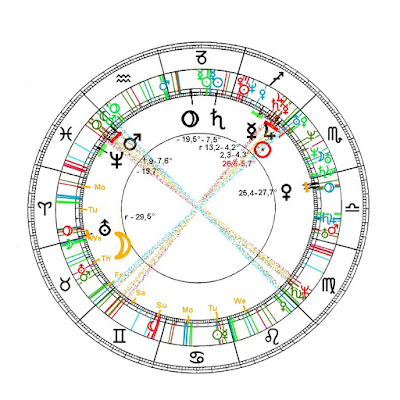 "No suffering, no sin eschewing, the
divine curiosity  strives for birth."

Jung regarding the earthly, more often quotes the inertia,
the legitime lethargy which the earth as element deserves
by which after all density, skin, shell, endurance becomes possible.

The fate of the skin etc ... moves with Venus. And Venus currently hikes for another short time in the borderlessness (air-element) of the desire for supplement, which entices the beings on the supplementary scale of the Libra of entirety.

docked with Venus
the resonance-chain with
red Pluto at 25,3° Aries
as contrastive-pertner
and earth-Sun at 24,6° Cancer
in square to both of them 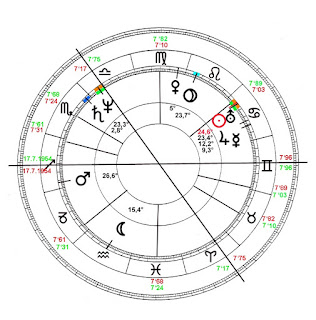 (no doubt, she is a medium, isn't she?
'highly likely' without knowing it)

hence we have this week with Venus:
fire = earlyness
air = height
water = depth

*
The bright spot this week is on and by Sagittarius

and see: Mars in square with Sun and Jupiter
what a wave this week
what a fire-wave
unitig in one resonance the three gods of fire

Mars the ruler of the primal fire even succeds on Friday
with a 0° square - from Pisces to Sagittarius - together with the
Mercury of the fire-element
at 4,9° Sagittarius
and
Sun ruler of the soul-fire will be here on Tuesday
and
Jupiter ruler of spiritual light will be here at red Mercury on Friday next week

There is no consciousness without distinction
of  opposits. That is the father-principle of logos,
twisting itself free in an  endless struggle off the
the primal warmth and primal unconsciousness
of the motherly lap, exactly the unconsciousness,
... unconsciousness is the primaL sin, the evil
as such for the logos"

light of the spirit and fire of the soul

red Saturn and Jupiter
father and son
of the fire-element

outbreak of the Camp-Fire. 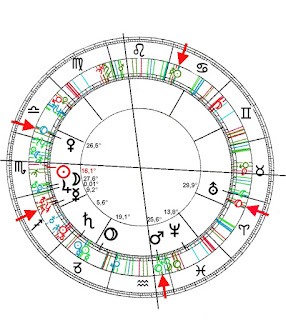 so once again: Mercury  8,3° Sagittarius on Friday

with other words: a heavenly wave of light and  fire
and the liquidation of differences in the concilliation
and a big waiver of things and roots
are my hunch this week

and Moon does the
the outer reality till Sunday-morning

followed by then resonating the inner world of
feelings and emotions 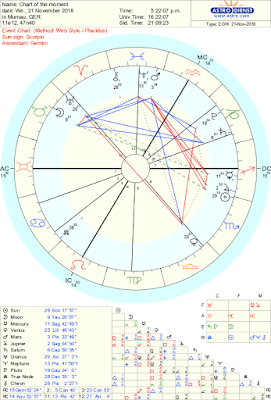