Sun on the Bridge and Mars Opens Intuition to the Backgroud 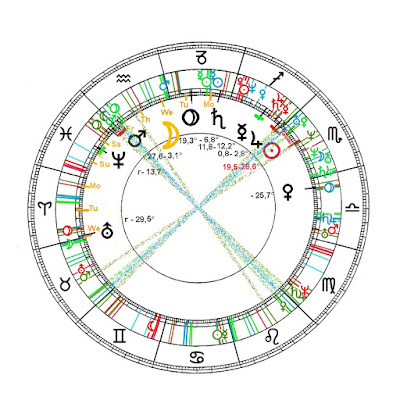 „Extraneous knowledge" in deeper layers of what
we call psyche ... layer in which the split of


contrasts in psyche and world, Earth and Heaven


no longer or not yet takes effect, the knowledge
of a total veritableness is to find. This veritableness
has an spitit-order-character, reaching until into the
essence of the archetype ...

But spitit-order-character means, that the world
seems to be factually arranged by this spirit,
not only about  ordering itself "in the spirit".

Psyche effects and appeares in archetypes, i.e.
in natural symbols, which determine our
consciousness and our entire world perception.
The star or space in us is no less effective and for
nothing less symbolic as in the outer experience."

indeed it's the solitude in the height
which will to be endured on the heavenly buoy
(5,5 km above the surface connected with it by
a brandishing steel-truss - in a dream of mine)
but with enough humility
is the astrological man
the priviledged animal on the Earth
surrounded by simple people
friendly neighbors

And in our deeper psychic  'socket',  the mysterious  layer of the 'elements',  Sun will be ending the week Saturday/Sunday in the resonances of the yearly birthday of water's Venus at 28,4° Scorpio and next Tuesday  Sun will be with 28,4° Scorpio blue Uranus of the air. This is about the highest glacier within a kinship: air = height, Uranus = ruler of the cold waters above  heaven.
In the 'Glacier' of Scorpio the free flowing hat become intermitted by cristallisation, hence Scorpio's waiver for anything beyond  clean cristallity carrying the kinship of the living, with the former and the coming  in one's sex as one of the twelve necessary stages of  helping eternal life to keep the pattern.

a bridge
between Sunday and Tuesday

bridges to
heart united with origin of man's
thinking

like wings carrying that weight
of feelings
through the times

after Sun = the center, what else?

another 17 weeks
till March

And Mars enjoys the encompassing horizon reaching him as resonance from spiritual-fire-brother Jupiter. In astrological language: a square between nature and spirit.
Newborn insight in the background is created by Pisces' solution of the foreground.

On his further way Mars triggers the Mars of the water-element at 0,3° Pisces
= a doubling of energy, like a bounce out of the straits  into the width of feeling


Not to forget Venus 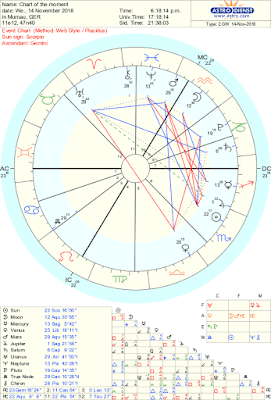