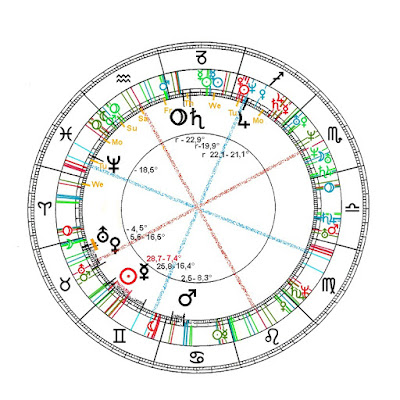 "Reading what never has  been written"

"This kind of reading is the oldest: reading before
all language, out of the bowels, the stars or
dances.
Later links of intermediation
of a new kind of reading, are coming into use,
runes, hieroglyphics

Walter Benjamin, Tenet of the Similar

Since my first encounter with astrology, by a seemingly  banal pocket book on the sign of Pisces, its author Wolfgang Döbereiner with his "Textbooks of Astrology", provided me with  sequel stuff for my ordering reflections.
With its 12 signs the zodiac ordered the entire universe until ones own house number at each place and in each time. In the chronicle at hand the chronicler projects the weekly considered zodiac on the so called 'adam secundus', the 'second adam', the  complete conscious  'zodiacal man', who is  from the beginning in our unconscious autonomously present, governing by the archetypes of time.

To this 'adam'-male   likewise corresponds an androgynous zodiacal woman with her own zodiacal order beginning with Libra. 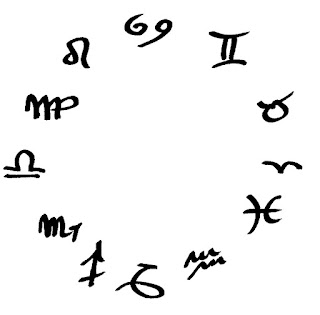 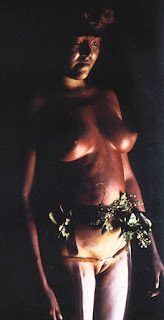 Circle and partition in which form ever are dwelling in the universe.  Apperceived meaning in consciousness, attending us the travellers in the circle,  are leading to the optimum of life as timely completeness.
How far man/woman in their 'educated' life are removed from the intuition of own timely completeness is a fact of fate, while the distance to the timely  meanings of ones own life is  fatefully.

The return to the oldest, to the zodiac and the art of 'reading' appears to the chronicler worth any commitment in view of all the coming centuries and millennia, as far as we will survive the present spiritual  bottleneck of mankind.

Miraculously blogging is (still) allowed in Murnau and elsewhere - one hasn't to move to Jerusalem,
one may begin ones work of redemption with oneself at any place.

628. attempt to read the zodiacal man's inclinations
within ourself 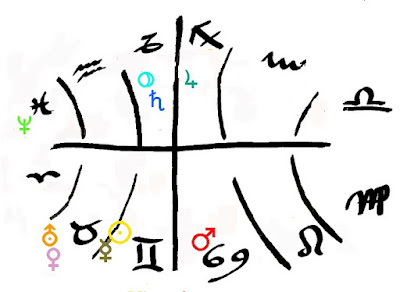 this week and this year: watch the 3. mirror
Sun and Mercury are are to  mirror the stern
fatherly rule of Capricorn's
torturing the demons worldwide
since 2008 by Pluto
and 2018 by Saturn

mirroring the beginning of 4th. mirror
at 0° Capricorn = 30° Sagittarius
between time and soul
will  mark the
mirror- transition from Twins to Cancer

Still missing among the shapes that change weekly is Venus. She rules Taurus and Libra and rulers,  dominated by these signs (currently Uranus and Venus) and unites "at home" constancy and heaviness of the earth with the levity of wings in the air-balance = spirit, which, as love, carries life.

in Taurus she walks on the secure acres and fields
of civilization and secures
the roots of life
but will be temporaryly intermitted
by her union with red Uranus of the
Kings-conjunction in the element fire of 1603
at 14,2° Taurus
on coming Monday

Well, it's the same to me like to you, mostly these elementary 'birthdays' provide to me non perceptible shape, but sometimes ... check Venus on  11 9 2016, or check Sun on May 5./6., every year and so on. It will be becoming the non-boring big and holy game, delving in the weekly heavenly knots and doing the 'google'  of ones astrological  intuition like: Sun 5th /6th of May: Birthday = Sun about 14-15° Taurus  = 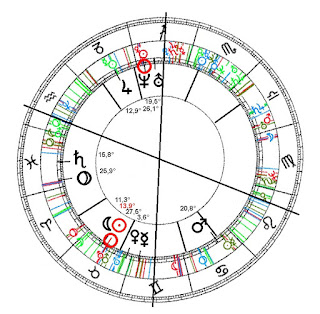 
Karl Marx,  Andreas Bader, Maximilian Robbespierre. ... hence Uranus is left, is toppler,  Saturn is right, is calcifyer, both are necessary for balance and both have their demons placed in the time and  in the souls but both have their Godly atoms everywhere, ready to enter by Venus-magic  a common state by socializing,  a  real but invisible anonymous state of socialized  God-atoms = hearts

and beyond the first door into the tooth-wheel of time you discover everyday a new cog in this wheel of time, remaining the same and changing everyday in which everything is and remains in  preordered "tooth-wheeled" circles from the beginning and with everyone's special place under God's greatest and smallest wheel.
every week
traveling with them in and out of us
traveling with Sun and Moon
and Mercury and Mars
and Venus
and with
beginning with Jupiter
the slow-marchers in us
with steps beginning with one year
Jupiter
then nearly 3 years Saturn
seven years
Uranus and
14 years Neptune
till sometimes 25 years
like a part of  extreme elliptical Pluto-Years

every week having the full astronomical/astrological game-plan of the archetypes within us and around us - with our ignorance or wisdom in the middle of God's  Sun and heart and the fate of  Suns realm Leo 'the center of power'.

nobody on May 5th. 1818
hunched anything of the complete Karl Marx
hence Uranus'power at the
14,2°-Taurus-'germ'
like fate is happening to germs
some are driving roots ...

Without this any 'astrology' is another kind of wasting time.

German-speakers will find a record of 'those astrologers' in my Tage und Äonen-Blog. 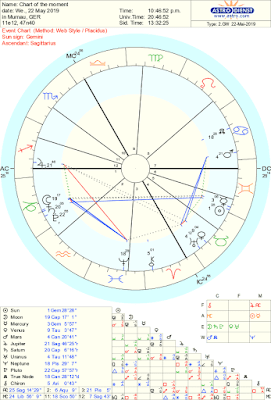 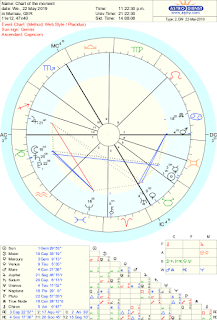