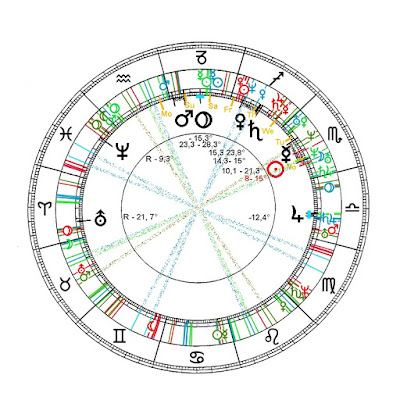 
"What kind of delusion blindfolds you? Cause in you and not emerging
from you, all this will be, what you are looking for ouside of you
and not within you. Such uses to be the vice of the  mean, that he
despising the own, always is yawning for the strange. (...)
Namely in us is shining a light dusky , which is a light of men  in the dark
so to speak,  not emerging from us, still to search in us, not descending
from us, but from him, who has deigned, to take his home also in us."


More and more the chronicler gets into the attraction of this mediaeval thought: Sun and his planet-family, us included, a mere appearances of God's conception in six mirrors. See Genesis 1.1. - 1.4a

So   the instruments of the cosmic concert with ten planets and their Moons around the Sun are inevitably - according to Avicenna,  Albertus Magnus and St. Thomas v. Aquin - organs of God's creation.
And know, conception ( in German Schöpfung = scooping) is origination. Cause scooping is raising from the depth to the height.
Already on the second day of the genesis  that is discerned: waters above and waters below heaven.
To understand that is more worthwhile than all universities.

And mundanomaniac might tell the chronicler, what is fit to be told of this week's psychic meteorology of the Gods.

What time is it?
It's  Scorpio's four weeks of grip at mans heart. To Scorpio borders are a given, so Skorpio's "no" =  "not of worth". Sorpio saves the border between good and too much of goodness. His feminine magic - he is a water sign, being the the soul mate - to be shared with him are the inner holy places.
And the the bad image of the symbol is the bad image of the "No"
Now Sun in the current saeson of "No" - Dig it yourself, don't dig for answer in me. Less'n it's  plain ignoance of the fact,  the facts are:

Sun is a star and a symbol. As star he is like a cell of God: radiating sovereign center  with Planet family, a cosmic system,  and earth roving in the green belt.

And the canon of that belt in every being on earth consciously borne in the brains of human beings since times innumeral, and the  canon of heavenly playground of the Gods mankind was pregnand with, was finally recognized as the canon of the zodiac.

And since I adobted the zodiac as my philosophical home 35 years before now (in synchronicity with adopting  my woman the same week) it has in all insecutities of 365 day each  year proved as  true  and durable beyond single liftime.
So Sun is one of the 10 necessities aka Gods  living on earth in the brains, hearts and muscles  of men, and one of the twelve nesessities is the woman at the "no"-button.
They are forever present, the places and moments of "no" in the dough where the good has to stop before the too good - to safe what? The border .

To me since 35 years learning:
Zodiac and the woman - each are circles. And one half of the womans circle might be yours.

And the blessing of the "no"  outside might be the "yes" inside fomenting the  fire-grade in womans soul when man is cocking on womans furnance on the fire of his waiver and the parallel with the zodiac might be no accident but healthy coincidence - waved into the dough of all of us.

Back to Sun in Scorpio. Sun at this place is calling off the dough the children  with an abundance of heart keeping the  the borders of life  in the stuff of the twelve.

So far the chronicler.
And for hardcore fans now the Week like mundanomaniac has told him:

in Scorpio crystallization  waiver sacrifice
by following the canon of creation

Now  Mars
he is the striker


I' m not quite sure, if I can get a fair image of Mars anyhow, being completely a n essence of the water  - element. But the discernment is possible: water impressivity, fire espressivity.
But if one is a well in the radiating first house?

while the reconciliator Jupiter at the scales  of Venus
traveling in Libra is approaching
the weeks of the square with his divine brother Pluto
activating the stress between Cpricorn and Libra
deeper:  between earth and air
now being neighbors in ruling
Sagittarius and Scorpio