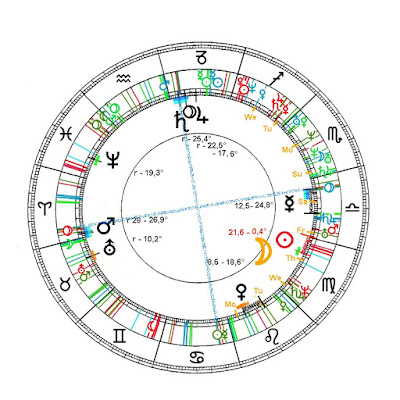 9.  14. - 23.  2020,  0:00 UTC
and under the northern Kingsconjunctions
of the four colors and elements
Fire, Earth, Air  and Water  of the years
1603, 1802, 1980 and 1305
under the Northern Zodiac
(click to enlarge)
What prompts off the unconsciousness into consciousness
"Its the 13 century ... in which a lot of  sects flourished,
which, notwithstanding of all  differences display a common
tendency, namely to put the hypostasis of the Holy Spirit
into the center of  the religious life. At that the temporally
something older tenet of GIOACHINO DA FIORE  has
exerted  a noticeable influence about anywhere, so that we
can find most likely traces in it of what apparently prompted
out of the unconsciousness  into the light in those time."
C.G.JUNG, Mysterium Coniunctionis 3, § 308
"The status of the Holy Spirit means an remediation of the
original unity of the unconsciousness on the level of
consciousness. On this,  in my opinion, is alluded  in the
logion of Christ: "You are Gods."  This  state cannot yet be
understood entirely. It is a matter of  pure anticipation."
C.G.JUNG, Letters, 24. 11. 1952
At this place the astrologer is addressed concerning an age. Maybe the study of the 13th century will bring about something of building blocks, which allow us, to let  a preparedness grow, to behold  contents   in-flowing out of the unconsciousness, which - until now - is  lacking in each conscious account.
Ages, centuries are not primarily determinated by the actual planets; even the slowest one - Pluto - determinates only a quarter of a century. For centuries we have to view the 'Septars' of the Kingsconjunctions,  first of all those of the earth-element, as the earth always provides the basic vessels in which the four elements fight and unite  with each other,  arriving in a fruitful unity.
The Septars are 7-years-waves, in the rhythmical enlargement, 1 = 7,  of the birthdays of the 4 Kingsconjunctions.
Pluto in Aquarius
the seizure
of the soul
by the Holy Spirit
JUNG' s ultima ratio:
consciousness lacks the unconscious
for unity
psyche tries to help
the consciousness getting on the path
psyche is mirror
of Heaven in Earth
spirit in nature
shape in appearance
it adds to consciousness
in dream and experience
the two unconscious stations
which follow the 'last moment'
marked by
Saturn/Capricorn
at the border of temporallity
Aquarius and
Pisces
earthly mirrored by Aries and Taurus
38. Week
each week certainly the question
what is it happening high up
in the spirit
when Saturn, Pluto and Jupiter
in Capricorn
like
father, brother and son
in Anthropos (=us)
want to be mirrored by Twins
what where and who 'is' Twins
well
Twins  discern the rules
above the interests
like science and attorneys
hence behold his  natural place:
he's the one to mirror
Capricorn
and he is a toppler
'marrying' the well off
families (Moon) 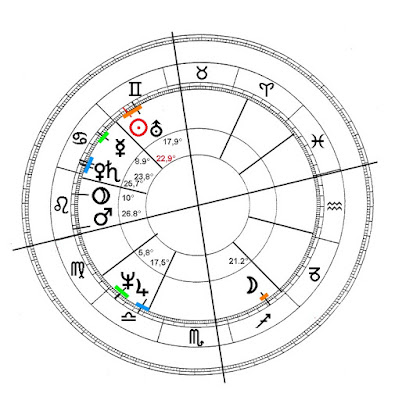 Now each evening   after Sunset to behold in the southern sky
Saturn left
Jupiter right
and, invisibly to our eyes between them
Pluto
It's an extremely rare chance to  contemplate these Gods of character, wisdom and humility
on the pilgrims frugality constantly in resonance with blind pusher into new existence: Mars, retrograding. 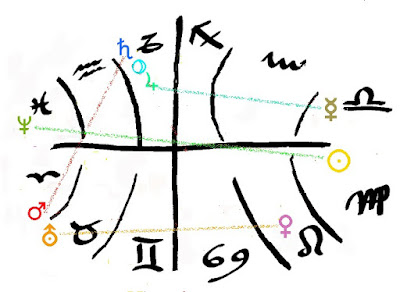 38. Week 2020
There are three levels, Mars' pushing can be operated on:
the elementary
in which the elements are fighting  each other
the emotional
where the elements co-operate but the fire of  passion
between 'King' and 'Queen' might become too hot
hence the 'Queen' might escape
and the opus failed
the spiritual
here  enough coldness is at hand for cooling  the heat of  passion
and the 'heavenly  wedding'
might be accomplished even by a
wise hunter
adding to this square of Mars
with the great three above
a second one has
Mercury from vis - à - vis
in Libra
ruled by  Venus' playing
in Leo
with Mercury
our consciousness i
in resonance with this
one-time-in half-a-thousand- years- constellation's
unconscious content
distributing new (old) humble measures
two weeks in resonance with
Mars and
Jupiter Pluto Saturn
and after weekend additionally with
the new Pluto of the
Kingsconjunction in the element air
meanwhile Venus moving in the resonance
of man-god Uranus the thinker
ruled by herself in Taurus
as an experience of heaven
Aquarius
in community
Taurus
while the
heart
of Anthropos and Sophia
in us
still
in united Opposition
of calculation and selflessness
hence
purification of heart
by childgod
Neptune in Pisces
in marriage
with heart in Virgo
Murnau, 9. 16. 2020, UTC: 16:31.
Eingestellt von mundanomaniac um 09:11