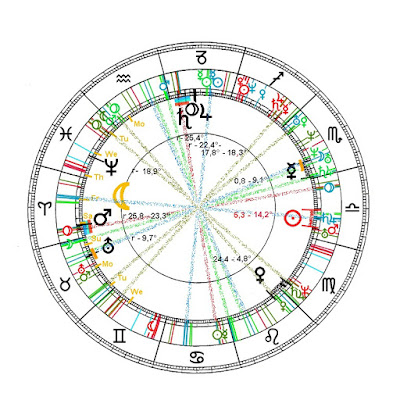 9. 28. -  10. 7.  2020,  0:00 UTC
and under the northern Kingsconjunctions
of the four colors and elements
Fire, Earth, Air  and Water  of the years
1603, 1802, 1980 and 1305
under the Northern Zodiac
(click to enlarge)
Religion
lat. religere
" a thorough and  conscientious  regard of, what Rudolf Otto
aptly called the 'numinosum', namely a dynamic existence
or effect not being brought about by an arbitrary act ..."
JUNG, Psychology & Alchemy
Christianity
".... which in difference to other religion ... teaches a symbol, which
has the individual  way of life of a human and son of man as
content and  even understands this individuation-process as
incarnation and revelation of God self."
C.G.JUNG, Presence and Future, Coll. W. 10, § 529.
Faith
"actually a secondary phenomenon, which relies upon, that
something primarily has happened to us, which  instills into
us 'pistis', i.e.  thrust and loyality."
ibid. § 521
... a modern astrology with 'pistis' is it, what weekly greens inside of me. Indeed also very old trees, even millennia old ones being withal, sometimes are piping up.
I'm conscious, the crucial, the horoscope of the individual, being unique in space and time, basically is spared in the 'Astromundane Diary', describing the constellations of contemporary or former presences, in which the northern hemisphere of the Earth is rotating.
Applied on the southern hemisphere, its inhabitants now also are in autumn ? - so at least is the prevailing opinion of the contemporary astrological community in north and south. ihat all runs according to the norther heaven About this mundanomaniac since long ago has told, what seems to be necessary to him.
Hence, northern hemisphere only: late September = early Autumn = Sun in Libra.
Southern hemisphere = early spring Sun in Aries.
40. Week
Earth in Aries
says
Sun in Libra
one divides oneself into two
is the mantra of the seventh zodiacal
first heavenly sign
Libra
imagination = bodies in the balance
in the terrestrial half
mirrored by Virgo
and her earth-heart's
reckoning
this for the heart of Anthropos
and Sophia
deep within of us
and high above around us
on Friday Sun
meets the 'radiation' with
Saturn/Jupiter
of the Kingsconjunction of 1980 in the element air
replacing that of 1186
on Friday Sun meets
Saturn
the 'blue' father and
Jupiter
the 'blue' son
united in the mirror
of psyche mirrored  in nature
with the body and the mysteries of the air
in the  incessant
creation
at 9,5° Libra
Meaning prevails without conscious attendance in all natural processes. . So nobody can give you your 9,5° Libra than yourself 's friendly attending your  unconsciousness. I't a patient  let it be, ... and watch which is most promising.
It's a place to pray and be ready for incessant gifts maybe. The major place for nerves, feeling thinking, major cause the similes of air are on three stages Twins Libra Aquarius simile to
earth soul heaven within Anthropos and Sophia and around them.
This 9,5° Libra -Meeting 1980 gave for about 800 years the new 'dress' of the element air in the mix of four. see here:
For measurement, imagination and thinking the 'dress' has changed 1980: hence the ultimate catastrophes of the 20th Century truly are end-catastrophes of a very old one, of a dying  way of thinking, and like a sick tree, with immune-defense- weakness attracts  the parasites , so a society with weak immune defense against lie attracts the demons, when the way of thinking is sick...
So now a meditation
on Friday
with the blue
Father and Son united
in the air
with Sun
anyone's heart
might be helpful
in all three
living floors
between heaven and hell
mirrored in the
Zodiac's first mirror
30° Pisces = 0° Aries
0°Pisces = 30 ° Aries
and Mars
giving the first kick
to every change
remains though in Aries
in the
draw-back
back through the wild land
remaining in the resonance with
Saturn Pluto Jupiter
in the the father's realm
of beyond:
'This is the End'
and the brother's :
'die for your truth'
and the son's
encompassing spirit
of reconciliation
in resonance with Mars
the first moover
in retreat
still igniter and now
in the resonance by visit of
red Pluto
of the
Fire-Element of 1603
it's a place where fire calls for
sacrifice for the soul
***
and that's with
Venus ' worlds
ruled by balance
and self-satisfying
till Friday part of 'the game'
of Lions
then, what remained
now in the milieu
of prudence and reason
***
and Mercury has entered
the 'totalitarian'
unconscious
crystal-world
of meaning ruling the realm of imagination
called Scorpio
which as highest- most stature
of soul allows
contrary to nature 'the freezing'
of desires
for savor lust and freedom
in the waiver
of arbitrariness
Like the Alchemisten im Mittelalter  knew: 'The soul governs the body"
early this week Mercury was in the radiation
with Saturn/Jupiter Kingsconjunction
in the element water
at 0, 8° Scorpio
Another place in the year to consciously dive into the unconscious attendance of a major resonance since 1305. The Father + Son of feeling. What might it be, the kings- or father's part in the dynamic mix and clearance of feeling, an what that of the Son? A fatherly feeling = consolating, a sonlike feeling = enthusiasm ...
this Kingsconjunction rules
since 1305 till 2157
so did on lastMonday
the basics of constant feeling
and on Sunday
Mercury will go
green again visiting
Uranus
of the element  Water = feeling
Uranus
heaven= spirit
of water = feeling
Uranus is it in Scorpio
clearing the stage
from outworn spiritual rags
which Neptune dumps in oblivion 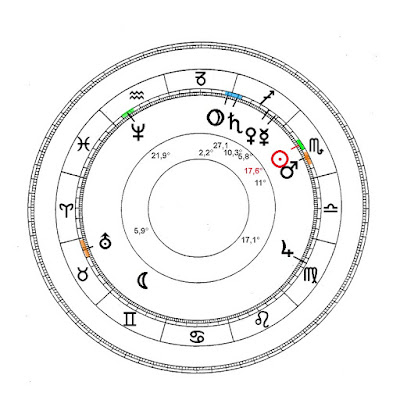 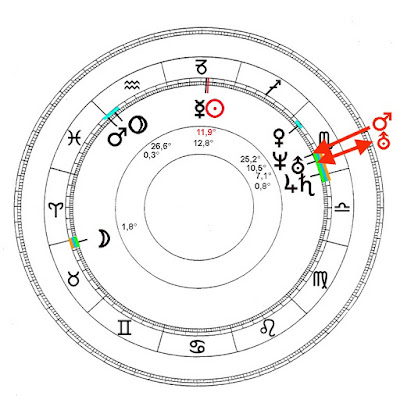 31. 10. 1517
Resonances to the Kingsconjunction in  Element Water
of 1305
the aeonic resonances are a bit moving the souls in Mercuries realms this week
in us
but only cultivated conscious  attendance might bring culture of it
in the rhythms of our solar creation
like in 1517
any happening in Scorpio since 2008
is of superior meaning
according to Pluto
in Capricorn
demanding
due
sacrifices
Murnau, 9. 30. 2020, UTC: 17:04.
Documentation: 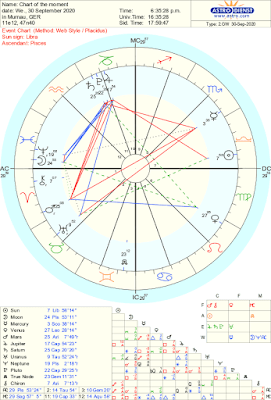