Cephalopods in the South?


In the end of the Middle Ages the debate, whether the earth is a ball or a plate, lead to the argument, the antipods, dwellers of the opposite side of a globe, would fall from the earth.

The appearance since the 15th century teached the Europeans, that it is not so.

Fife centuries now man on the nothern hemisphere has lived with the counter-world, "down under",  on the "lower" (why not upper) side of the earth-globe. One knows, or  can know, that "down under" anything is reverse to us: Sun rises on the right and travels to the left if one wathes him, the lows turn right about, highs turning left. And,  but ... that's where the rubber meets the road, the Australians and South-Americans use our north-clocks with right-turning hands, contrary to their course of Sun, and they use the north-calendar as world-calendar which signifies this one as the second autumn-month aso.

The most interesting fact however  is, that even the most fussy Planetary Ephemerides tell a  balony: Buenos Aires is situated 3 hours west of Greemwich, so it is at the time of the equinox 6:51 local time and the Sun has just risen. The chart according to the data of the ephemeride lets admittedly Sun rise in the east, but the east on the southern hemisphere is on the right and not on the left if one looks in the equator direction. As the Sun in his daily seemingly movement is moving backwards through the houses/signs, he does the same looked at from the southern hemisphere, and the zodiac for the southern sky has to be drawn
accordingly. So much for the hours, signs and houses of the daily heavenly movements.
The yearly movements have been equally watched  north-blinkered. When in the upper example for Buenos Aires, the position of the  Sun is vertical upon the equator, at 0° Libra, one has  unconcerned hitherto on September 23.  also let the astrological autum  begin  in the southern hemisphere. Amazing. For my understanding of the world Spring = Aries and nothing else. Likewise Libra is tome the code-sign of autumn. And with entering of the Sun in Aries at the pole beginns the day, lsting for half a year, and with entering 0° Libra  beginns the pole-night for half a year beginns.
Hasn't for instance the light day begun on September 23th in the Antarktis, hasn't Sun there risen above the circular horizon?
Ergo at the beginning of the south-spring, September 23.  Sun can only be notified at 0° Aries regardlesly what the norther ephemeris is notifying. If one notifies him for the southern hemisphere also on 0° Libra, it is like one reckonned, the southerners would walk on their heads and think with their feeet.
Hence results, that not only the position of the Sun, but of all planets and the Moon have to be renoted to the exact opposite position. Only on this was Capricorn remains = Capricorn, namely winter and Cancer remains = Cancer, thus summer. 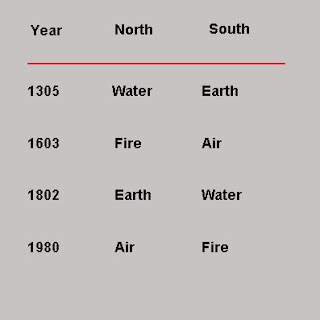 We on the northern hemisphere should, like I see it, generally mind our own businesses, and leave the southeners with their own watches, signs and seasons. If we take it this way, astrology of the Eurasian
cultural tradition is primarily a northern matter. And from the considerations of time of the Inkas and other indigenous people, or the Aborigines aso. very well can be derivated genuine earth- and heaven-calendars.
But if, in the time of world-style, world-calendars shall be used further on, so one should be always conscious of the fact, that the civil southern New Year starts on July 3. (North) and not on January 1.
and the astronomical Sun-year just not on 20/21. March but on September 23.