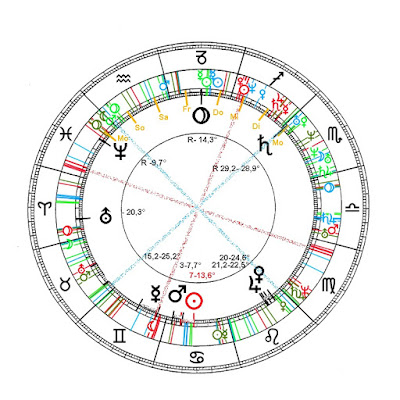 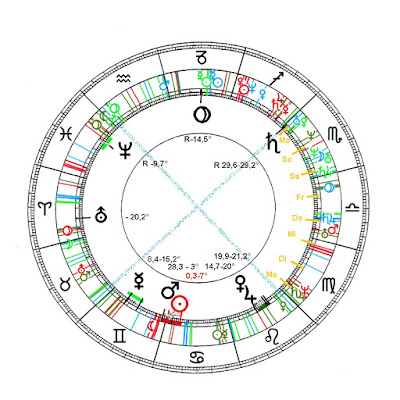 and Saturn and with him the images
of the extra temporal father
in time
end of Scorpio
solitary in visit of the
"blue"Uranus
of the aeon air at  Scorpio28,4°
the nearness to God of
mans planet
to whom the remembrance of those
who are waiting in the beyond
bestows wings
everything else remains
attenuated like it was 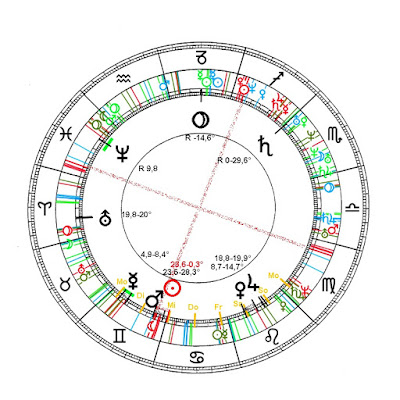 
Monday, June 15.
The last post I conceived as if Sun would unite her light with that of Mars and the virtual red Moon of the element fire on Sunday. In truth they do this in the morning of Tuesday together with Moon.
Error in service last Monday.
Apparently it was the intensity of the red resonance in my freshly drawn chart, with which the last weekend appeared in my perception. But the culmination of this resonance - the perfect constellation - happens just tomorrow, Tuesday, this completion of the unification of Sun, Mars, Moon and red Moon of 1603.
And everything of the contemplation of last week takes effect for the approach prolonged by two days.
And to all who are illiterate to astropoetic symbolism this constellation takes effect like for the animals - it mirrors, unnoticed by consciousness - unless in a dream - in the depths of the undetected psyche which are so undetected like the steady inner physical processes.
Only the handling of the language of astropoesis permits consciousness to become quasi a seedbed for the uncomprehended but sensately perceived (intuited) being of archetypes = gods= the Self = intensities of constellations in the inner and outer heaven, vision able  in the sudden double-meaning of simple things.

According to the mirror-truths of the ancient physics heaven mirrors eternally earth like in contemporary physics wave mirror eternally push.

As it is unfortunally, mundanomaniac himself is scholar of the astropoesis and like any other he has the way  emerging by going it.
To this:
astromundanediary Mai 25th


" ... what is a secret to all others, namely that  in the unconsciousness the third is preparing
and is even beginning to suspend the energy of the contradictions, i.e. the illusion, that the contradictions really are objects fades, with this also the axiomatic of symmetry."
C.G.Jung (my translation)
and the wings can start to grow ...

And certainly Mercury and with him the realms of the travelers, the narraters and the liers and doubters are in approach to the third time of completely sharing the resonance with Neptune in Pisces the god of childlike naked truth in the square between Pisces and Twins or depths and surface.

Thus: advance of Mercury to the maximum-Neptune-resonance out of Pisces in the beginning of next week.
Twins = elementary air (=spirit) with Pisces = spirit of water (=feeling).


Everything else remains solitary this week. This "solitary" ... means "resonance-poor". Solitary means unaccompanied. That's the way the fatherly Saturn walks back into the Scorpio- waiver-circle of the timeless sons being able to become eternal sons in the finity of the human psyche.
To Moon
Is there such thing "Moon for all" in astrology, independent of where somebody has  Cancer in his chart
or Cancer-ruler Moon?
If yes, it must designate, what the ancient called "element water", the inexhaustible undulating flowing movement in the inner and the outer of all biosphere - namely that it creates folds in which life can rise. This humid zone is called Cancer by the zodiac.
So to "travel with the Moon" means, what it means for the most of all: to only dream the unconscious.
Thus being locked-in the daily world of conscious objectives and intentions.
To explore the unconsciousness consciously is therefore the meaning to everyone who wants to come to himself.
Time of his adult life the great C. G. Jung has led the consciousness of people, guided by their dreams, to their self.
But in dreamland - so the astrologer may say in short - the zodiac helps the illiterate with the symbol-language of the unconsciousness.
The Moon of anybody lives in him according to his horoscope, the "Moon for all" on the contrary is wandering and so are the heavenly places where it flows and their terrestrial mirrors.
With what the daily consciousness has to deal therefore is the meaning of: are we prepared that it will be flowing at this place?

Anyway, this week and until Tuesday night it's flowing in the Twins. Their neutrality thereby will be called into question by emotional impulses, but it has to learn by these to take them into neutral account. And Moon takes part in the fire-congregation described in the outset and is thereby invisible in this night of new Moon.

Wednesday, Thursday until Friday morning the flow is wandering through its own bed  in the sign of Cancer, in which the daily needs are nursed inclusive the dreams.

And till Sunday noon then the flowing at the court of the heart where the I myself rules: increased ludic drive, maybe form drive, perhaps inclination for a bath in the river.

And the new week views the Moon then in the grades of the Virgo.

Dwellingplace of the Fire - One Week Approach 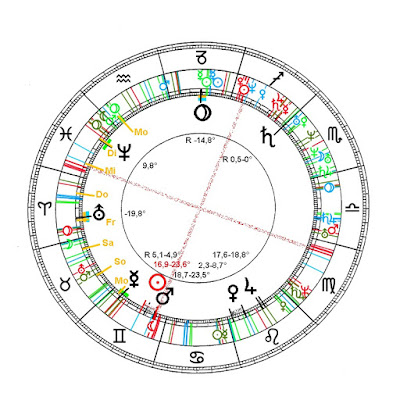 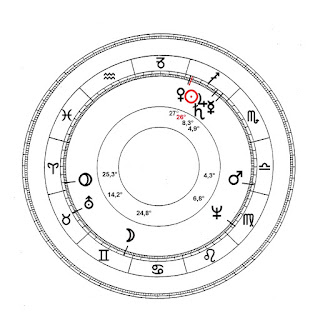 Kingsconjunktion 1603
we don't know what this meeting of Sun and Mars with the "red" Moon will be. We are not used to think in such images. We are not used to even think about such thing as an aeon what the earlier humankind was familiar with. Home of the fire. What is it in good and bad?


Only thing which we know are the words. We know, can know, the myths of these words telling us something. But the place in the Zodiac tells us everything:  "Moon" ruler of Cancer,  equals home, inner world, in between the elements Water". And like water it means "everyday" you need to have it. Moons place is 4 (th element), Moons number is 7. Moon is the week and week seems to be the lap of life. No Emperor, no prophet called the week into being.

Twins completing the 3 dimensions in space and according to their element air carry the meaning of steadily  mooving  on ways connecting  the dimensions ...

In Twins Sun means living heart beating along the ways between hearts.
In Twins Mars means to dash on the connecting  ways opening new dimensions in space

an on Sunday now they are together, this 400 Years old "home of the fire" - red Moon - on the early stages of comfort. Together in the psyche of the beginning - as fire says zodiac is always the element of beginning: in space Mars, in time Jupiter, in self Sun.


Now when Sun and Mars and red Moon unite their natural and virtual lights on Sunday then are enclosed in this unification Uranus ruled by Mars  Jupiter ruled by Sun and Firemoon being so to speak the psyche of the element fire their unification could be cause for a more or less quiet celebration of a nature- religious respect.
The attendance of Mars however might be a guaranty that it even will be  rumble but certainly a heartily one.

The others of the Sun family they leave one another alone in this week but to their hearts content the Twins command about the resources of Venus who in this month lingers in Leo, meaning risk or to be blunt squandering. Where if not in Leo could the squandering be at home
how could we exist without the squandering of our star? 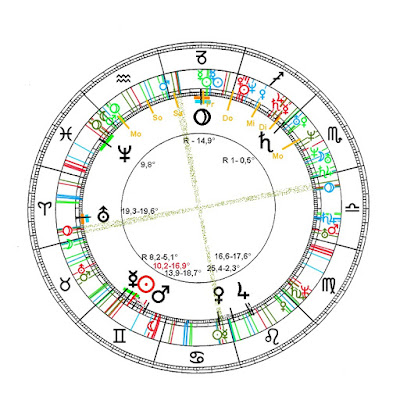 and simultaneously elsewhere with sublime rulers on own ways
Jupiter

on the ways of the son
the father Saturn


and Pluto and Uranus
on the floor of Saturn and Mars