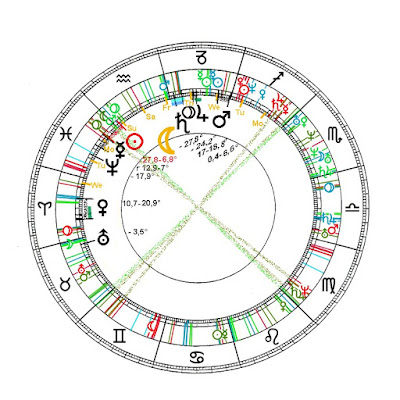 It's the "helpful figment" as which astrology has proved to me from day 1 39 years ago. She gives names to facts according to their places in space and time.

40 yers ago, after all ,  I prayed for my prong on the cogwheel of everything.
This diary is the leading edge of my prong between God and earth.

under the northern sky
of our green planet

Mars
our explosives
in a matter
beyond
temporality

called Capricorn
kind of six weeks
initions
of coming times
Capricorn is like a
pilgrimage
Mars in Capricorn
storm in the north
the last after
Mercury, Sun and Venus
the inners
now Mars
the first outer
neighbor

and the green element
water
aka feeling
has water-  Mars -birthday

Now with green Mars at 0,5° Pisces since 1305 (till 2159) it's a kind of given, a very old  one signifying: the elementary strength of feeling by beginning  is since then  not in this world but beyond in a possible future - certainly no one is excluded from any pilgrimage by beginning future from scratch while still living

after today Sun and
green Mars of water-element in  Pisces

tomorrow Sun and
olive Moon
of earth element in Pisces

finally we nearly lost Mercury on his deep-sea trip in Neptune's realm. I don't know what's really happening in Twins- and Virgo-offices where exactness is natural. Unfortunately Mercury will 'go' retro, hence Mercury in Pisces will last till April 12

But Mercury in Pisces for a time might lend the mic to the voices of the background.

Of our Personality except by Venus and Uranus all folks are
busy with different stages of preparing coming times, like the
peasant does in Winter- recreation and preparation.
But Venus and Uranus are bursting with spring 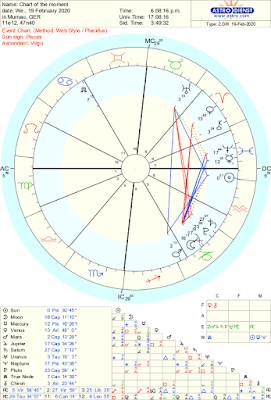 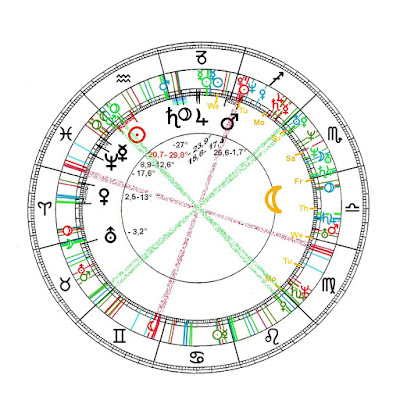 
and under the Northern Kings -Conjunctions


of the Four Colors and Elements


"The lapis (philosopher's stone) indeed is being
thought  as unity and therefore for  the 'prima
mataria' anyway. But how this is a piece of
primordial chaos, [...] so the lapis consists
of the four elements, resp. must be assembled
of these. In chaos they are not united, but
only coexistent and must therefore be joined
by the alchemist procedure. They are even hostile
with each other and won't unite voluntarily.
Therefore they represent a primordial
stage of conflict and mutual  repulsion."

" The mandala denotes the human or godly self,
thus the totally or  perception of God [...]
'do the hermetical vessel out of your mental
entirety and pour into the entire aqua permanens,
id est doctrinae' [...] Hence is  suggested, that
the adept shall change and digest himself by the
alchemist doctrine."

I realize, the hours, I do the diary, are of me being in  a kind of 'hermetical vessel'. When , after hours I'return to kitchen, side way or  main street public is a kind of alighting.

Doing astrology is to be not to be disturbed
'listening' to the signs and
listening to the mountains and seas of images in the unified circle of the zodiac.

The latter is the center whom we call 'zodiacal man' the anthropos made by
God and man whose great friend was Carl Gustav Jung forever who diligently
respected the border and never teached any sentence as an astrologer.

That clean water between Psychology and astrology gives

between Aquarius and Pisces

while they talk to (zodiacal ) man

Anyway, anthropos is a real hypothesis like God
related to God as creator

living in finite forms, hence the chronicler enters his chair: 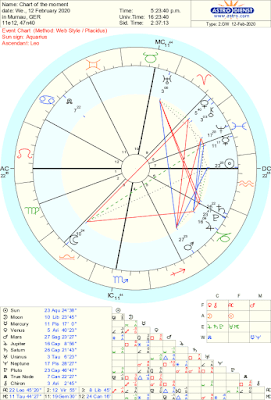 but today Wednesday Mars was  in deep contact
with fire's Venus

till next Wednesday, then
complex entry
in Pisces 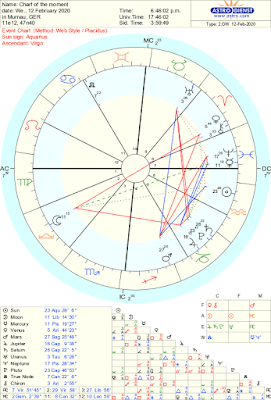 The Blind in the Light - Defender in the Storm 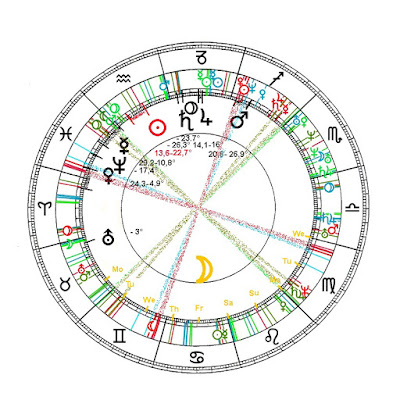 After the enmity of the 4 Elements has been
overcome, the last and strongest contradiction
still exist, whom the alchemists could not express
more precisely than by the mutual dependency
of male and female.

Middle, only that to which one returns,
not that off which one never embarked and
drove out.

and all that meaningful connected
by the "transcendental unfathomablility"

"As well namely as man has a body, principally not different
form the body of an animal, so his psychology also has quasi
lower floors, in which the spirits of  bygone eras dwell,
like the animal souls of the times of Anthropopithecus,
further the "Psyche" of the cold-blooded dinosaur
and in the deep most depth the transcendental
unfathomablility and paradoxy of the sympathetic
and the parasympathetic proceedings.

Our individual lot is disseminated among many, Gods  dances in the endlessness of circles in Universe, into which Suns do implement order by the steady conversion of his children the planets and their rhythms since  the burning beginning.

What is astromundane diary? watching meaning before enters time. And trying to read the script. What does it mean on Earth ? It's up to everyone to decode heaven by the astrological key. It's good for health and brain.

on Saturday Mercury meets the
olive Pluto
of the earth-element at
Pisces 6,8°
keeping the code of life in
circles of time
for the element earth
providing the vessel for the
unification of the four Elements

while Moon is dealing with the dailies and the zest for life, while the 'intensities' in the zodiacal man apply with the transcendental 'spirit' of the 'third floor' = Sagittarius till Pisces. 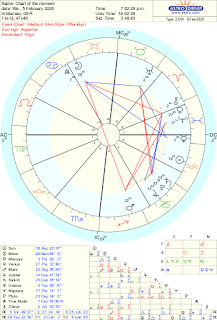 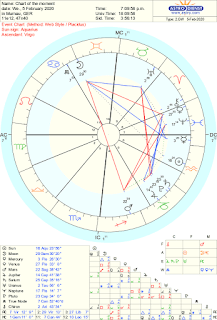 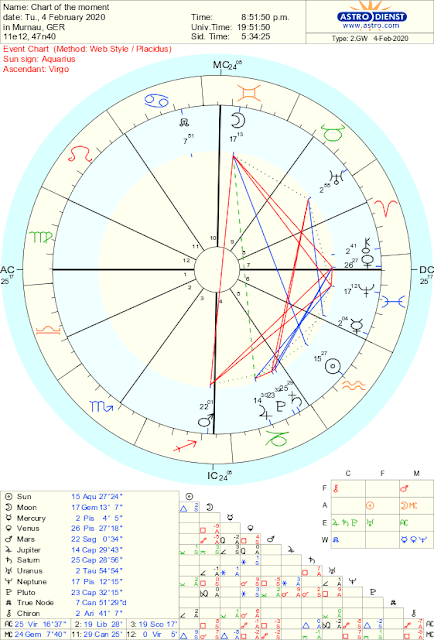 Ascendant
what is this moment?
Virgo
Mercury in Pisces

What kind of innocence do I mean? That of the children,

“Truly I tell you, unless you change and become like little children, you will never enter the kingdom of heaven."

in a German translation I remember the word 'see' instead of 'enter'. I think 'not to see' in this world, in every world, is like having forgotten, that like every world so also ours is a creation of the worlds before.

The rich do not see them, heaven's realms on Earth, only the metallic or oily gleaming wasteland. But those becoming like children, for those God has, I bail for it, places at will.

Anonymous places in this world.

There everywhere a new kind of that old life is lived which has become from time immemorial. The key is indeed the birth-moment, that and only that is the own one key.

The Problem of the poet: he has the key, but God enables it, when he wants to, namely in the heart.

The lived 'poetical readiness' of a kind heart, to do, what has to be done, and what without knowing it only this heart is prepared to accomplish,  what no other one is able to do ... no healthy child asks questions like this but lives the poesy of the moment in the never ending symphony of the Sun-chore, which our heart within is able to receive every moment we are not distracted by 'things of importance'.

Let's get 'Ears of spirit', keep watching the archetypes, watch the intensities in the zodiac, all that is God's world. Let the grow of an  conscious astrological organ get started. 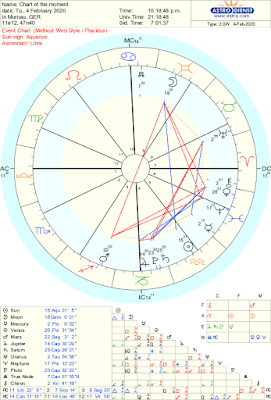