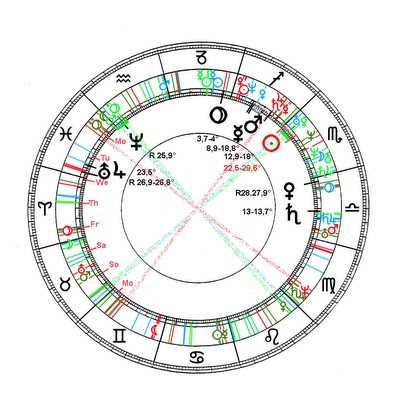 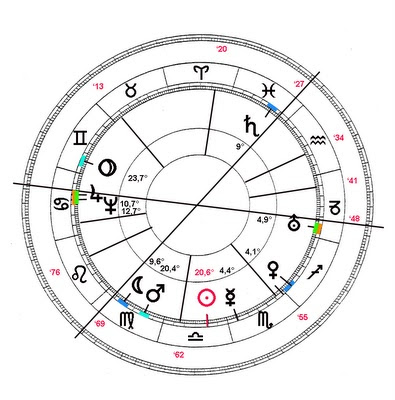 Midterm between Washington and Sacramento

29 years ago in the Agnes-Bernauer-Strasse in Munich
I got to know how the horoscope, this multi-faceted Sphinx
to a certain extent can be taken  by the horns by first
limiting to the broad classifications:
Ascendant, Ascendant ruler, the sun, (and MC).
My readers usually get to the conceivability outlined sake, this basic structure.

Every two years on the first Tuesday in November, so now,   America votes within the limits of the 50 U.S. states.
Today it is called the mid-term elections to which the American people are to choose their new representatives of the 111.th Congress, along with a third of the senators, and several governors, including Arnold Schwarzenegger's successor, sex whatsoever, and - also in California - the "Proposal 19" is up to a vote in which the citizens can decide  to smoke hemp (cannabis)for relaxation, to have it  and to grow it in small quantities.

Will proposal 19 get the majority? Does the astrological model, the possibility of finding an answer to this simple yes-no question?
If not, then why astrology?

Here, the Sphinx, the chart of Sacramento (literally: a place of sanctuary), capital of California at 18:00 PDT, the time the polls closed.

It has, through the different time zones, Sacramento virtually the same ascendant, the Washington. So the 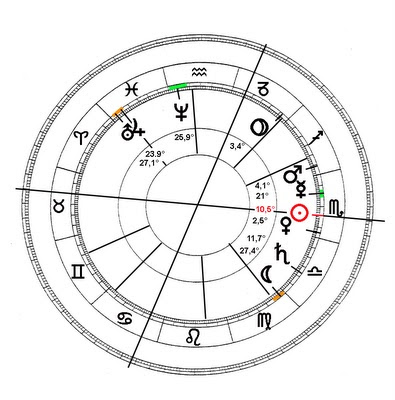 Assembled:
Taurus, we, the flock instinct and community ... our consciousness.
This is one of the final mysteries of Astrology: Venus rules two faces of the zodiac, she conducts the baton to the feeding instinct in the image of the powerful grazing herbivores "TAURUS " and the same Venus rules: awareness, "SCALE".
To this CG JUNG:

"Instinct is nature and will nature . Awareness, however, can only want culture or its negation  ... (ibid. p. 250)

We can only  break out of instinct because, unlike the animals,  it's given to us - grasped and expressed in the astrological picture pasted by our Egyptian ancestors into the zodiac: the dead-SCALE, with our heart, the organ of Love, to be weighed on the edge of eternity. According to the consensus omnium  Venus is the goddess of flocks and goddess of love - the one which - as strong as the gluttony - causing this itching desire in the heart:  to share food with someone ... "may I invite you to dinner?"

America completed today at 18:00 each time zone when the polls closed, its initially virtual "congress" that is his "meeting".
President and the majority of its Senate, however,  the Americans  have assembled there two years ago, but that happened in the sign of the twins. It is hardly surprising when the government essentially does nothing else, but PR, for whom? Question: Who can afford PR? Though "PR for" the powers that be "- and by whom Mercury was conducted on 11/04/2008 Answer: In the sixth house by Venus in light and dispersion of 21 ° Sagittarius . 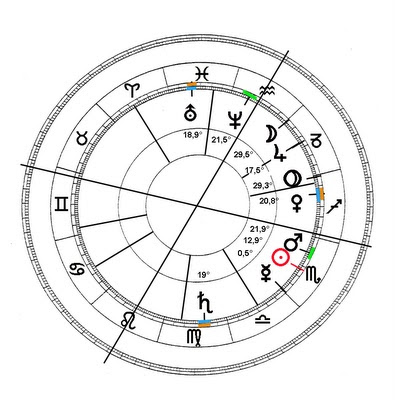 Back to the representative of the ASC in 2010, Venus. Venus is indivisible and hence paradoxically - represents earth and air, animal and spirit-  only to be found in humans (as well as Mercury, her divine brother - air and earth).
The animals lack the consciousness, lack "air" / "Heaven" / thought to the completeness and   God is lacking the finite nature, which is our human situation,  which is paradoxical and both God and animal are  imposed to us, often painful.

Venus this paradox of instinct and consciousness presents her location in the sky in  no distance greater than 40 ° from the Sun and around  it in the sixth, seventh, eighth house, to the sunset of Scorpio sun around the descendant.

The Descendant at the   mirror axis between the sixth and seventh house - where consciousness and awareness reflect into each other like meaning and concern  and vice versa, there  the Venus of this Congress is in the sixth house, in care and awareness of the conditions of individual liberty.
So that this is the view of the chart, in other words, this is the Mandala of the new U.S. Congress:

Conductor:
Venus 6th House in Scorpio
Virgin Dominate (Libra subdominant).
Mercury 7th House in Scorpio
Scorpio Dominate
square in resonance with Neptune.
With the latter, the Neptune-Mercury-resonance-square the general situation is  roughly outlined  in which this Congress is elected: Neptune resonance directs resolution of Mercury, the given traces and exchanges, roads and markets, media and networks and their rebirth in anonymous new beginning in city and country.

With the former, however - Venus as a conductor of scorpion Orchestra - the "mankind" dimension of this assembly of the People's Representatives is designed.

Only briefly to the sun, it is, as an element of fire, the active pivotal element in the horoscope. She is the one at the conclusion of today's election who just sinks  into the Pacific at 18:00 PST. All regular elections in the USA , when they are completed, have Scorpio sun. So the collective instinct, having arranged the U.S. elections in the first week of November, depicts the US as a nation, willing to make sacrifices.

"Scorpio" marks  the build-in  archetypal  share
with the dead and the not-yet-born. It's
a share of presence, which includes, that we owe them,
the invisible souls,  a part of lifetime and essence.
In other words, the souls that are supposed to be immortal, so disembodied, without a face, except by dreams,  the immortal souls of the dead and yet unborn, may they "live"   in some unknown way among us? Out of  this idea  Mundanomaniac receives the meaning of  Scorpio / Pluto resonance.

A Congress that is based on the questions: where do we come from? what awaits our grandchildren? what must be eliminated?  will intone to the score of the poet of the SCORPIO-Dominion, Pluto, who two years ago took up in Capricorn, the long winter trip ... or, as Jon Stewart said on Saturday on the rally for sanity: "Hard times, but not end-times".

And California? The Proposal 19,  the legalization of selfmedication by smoking, possessing and cultivating  hemp? Breaking down the criminal hemp market ?
Californians decide today whether  the harm caused by not-hemp-smoking be more serious for larger or smaller parts of the society than that of using hemp .

What was the quote from Jung?

"Instinct is nature and nature will. Awareness, however, can only want culture or it's negation  ... "

Hemp, cannabis, marijuana ... How does this drug relate to culture and to the zodiac? First of all, of our animal and Stone Age forefathers, we have a long tradition of free-for trial and error and consummation of all fruits, plants and their drugs. The extent to which regulatory culture here refers to wholesomens, is open. Currently there seems to be over-regulation of drugs and non-regulation to banks. Both sources of infinite enrichments for few.

But again the question of speaking German, "kiffen" (smoking pot), which zodiac, which planets belong to?

I think,  we do not need long to guess as the language instinct has been judged. What is alcohol? Answer language instinct: "Breit" (crocked), so fluid, so Dionysos. What is hemp? Answer: "High", or "air", "smoke," Heaven "so: Uranus,(Greek: Heaven)  the "ladling" God (from the "sea" of unconcious) of the human spirit.
And has Uranus(together with the spreader Jupiter) a resonant connection today? This, dear readers know of  the above model in the orange coloring of planetary locations, receiving the Uranus-resonance.

It is moon, our sense of value and essence feeling and spirit in nuptial opposition ...

For me, this is the answer, whether it's this for the Californians will depend on  how far they are prepared to embrace the determinant of this hour, how far matured to adopt the approach of foolish Aquarius , aware and for all of us.

The extent of this maturity no astrologer  knows maybe not even the omniscient, then that would mean he would have just created us  to find out.

And here's a bonus:

Each day, including today's election takes place in a kind of special resonances that we encounter unconsciously, but which seem to be effective: the constellations of the Königskonjunktionen (Kings Conjunctions) of the four elements, which order a special archetypal background into the zodiac mandala, each lasting more than seven-eight hundred years  and in which our "we", comprising many generations, is inserted.

In this frame, I have added the lights and planets,  receiving resonance today, being either, "radioed" (not marked) or base station or transmitter of an element-chracter (marked). 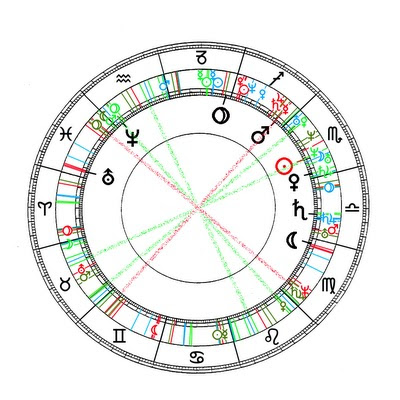 11/02/2010, Sacramento, 18:00 PDT
Active today: the resonance from Mars, Sun, and Neptune, according to the Kings Conjunctions in the element of water in 1305 and in the fire element from 1603.
Mars and Neptune are signs of end and/or initial states, beginning with Mars, which I neutrally call "charge" , the energy state. And with Neptune begins "meaning" which, extremely significant, is drawn in the zodiac by two fish, which are connected by the umbilical cord before the origin = state of separation = Aquarius, as sign of the contrasts in nature, which, in the state of the unconscious being  not yet separated but connected with each other.
And what do they say,  the "king radio operators," the sublime light and the planets of the four Kings Conjunctions of the four elements?
Methinks the sun = our conscious experience, on the green  Neptune of water, welcomes the end of the old and the beginning of the new (yet unnamed) meaning. (Way of the meaning from pisces to Aries.)

Mars = our momentum, opens  for the red fire-Mercury, the door to a new mythical world of ideas (Sagittarius) which  ways provide to those who walk on them  with an unprecedented energy ("fire") . (Way of the charge  from Aries to Pisces.)

And Neptune = our intuitions, on the green water-Pluto, ending a previous value of experience and also a new beginning in which the help of the "Grateful Dead"  may be available   in a new free canonical way of thinking
It is now 8:14 am at the Pacific Ocean on the east coast  11:14 am, and this report  ends here.