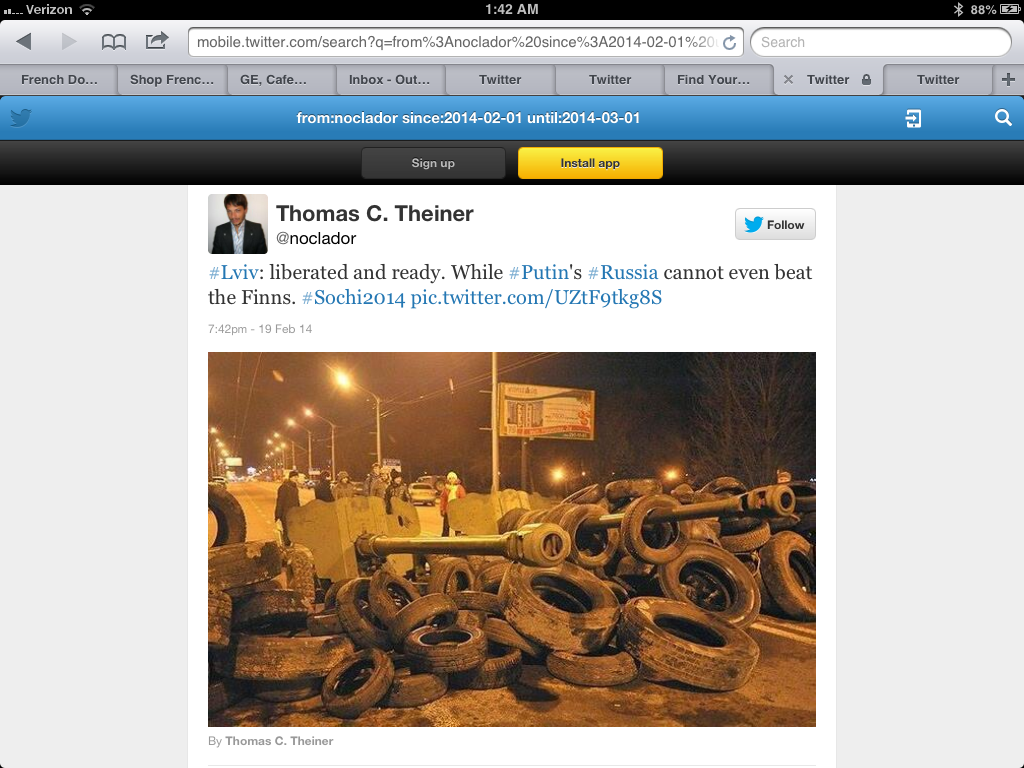 Resolution of a Center - Birth of a Wilderness 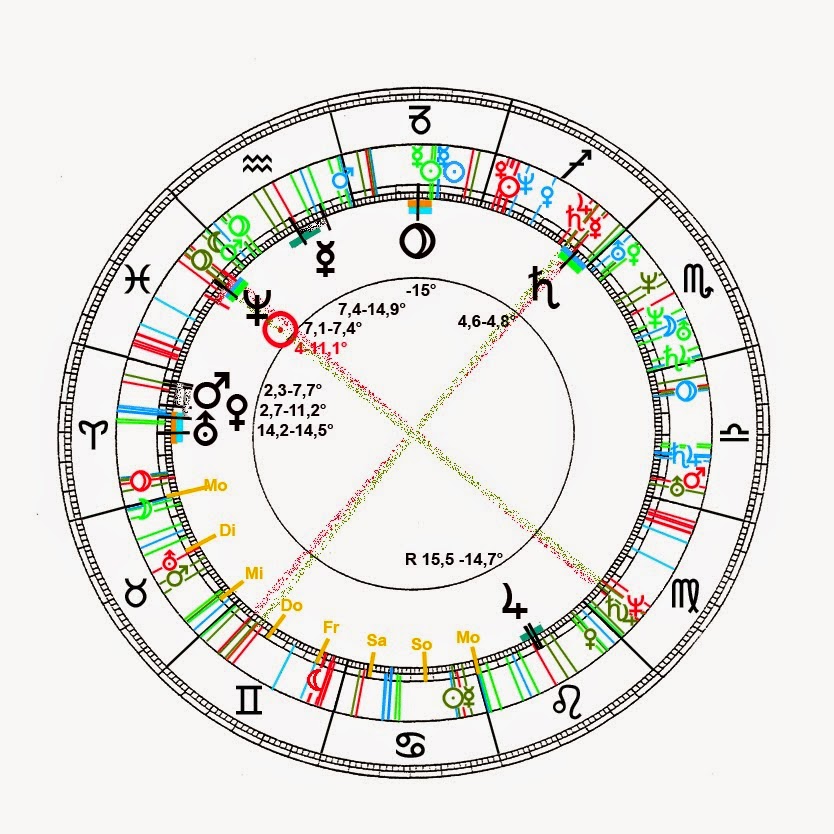 to a noisy 2,5° distance the resonances
of Saturn and Neptune come close together

child and grandfather are "talking" to another

and Sun heart of the year
will be visiting the child in its realm
in Gods lap
Neptune on Thursday at 7,2° Pisces

and if this is
then it has to be so 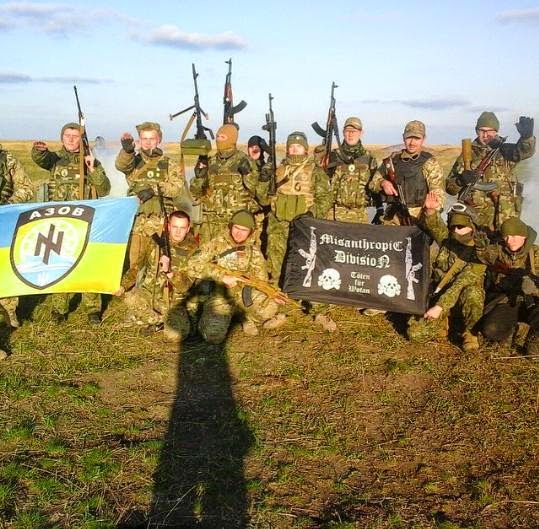 to tell it in another way

Sun - Pisces - Neptune
it's the resolution of a center


and then now arrived those three weeks
when that (hopefully not too) bloody mystery
blind Mars ... replete Venus in Aries
the pounce into the herds
has begun
a kind of easter-time
and this is the week before the extraordinary
moving into the all-over-the-year-resonance between Pluto

Mars and Venus to Jump - Hearth over the Dawn 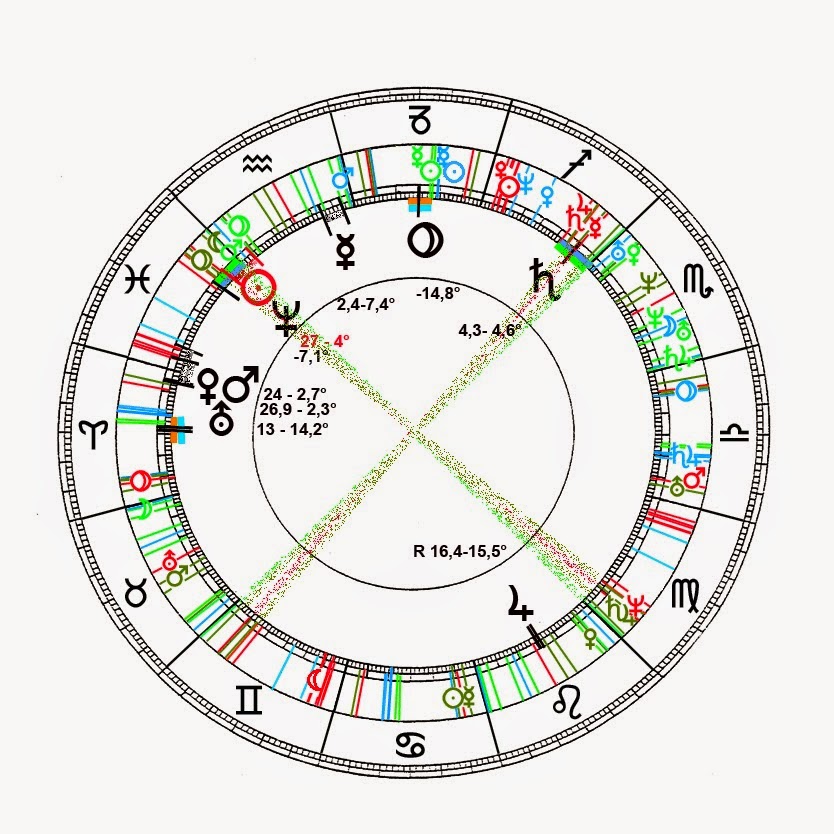 
a date means
to arrest
something floating

to do this
we are constructed
and in danger
to forget

where the firm
dwells in the floating


and it's good to us

to receive this point
as a gift
and  stick to it

the humans recognized
and fixed him
without knowing

in the heavenly fields
of geometry
over the horizon


In the battles for Novorossia until now it was easy to  allocate the attacker Mars to Kiew, while the defense-goddess Venus to the two cities.
If now the unified cities hold the strategic initiative, thus the power to decide, where and when there will be action, so this in the concurrence to whom Mars and Venus, attack-energy and resources, in open terrain  will be more available.

so far for Mercury in his
upper mirror

and those diving - start of Sun in Pisces
is rife with
retrospections of the elements
water and earth
here is at 0,3° Pisces the  'green' Mars
wrath of water
the repressed gods power
of Neptune
since 1305

as well as
earth-Moon at 1,4° Pisces
concealment for earthly beings
in the lap of the secret and clean
in their tides
since 1802
and here is at 6.8° Pisces
earth-Plutos blessed waiver
in the lap of creation
also since 1802
and now ... to the weekend Sun runs
towards the resonance
of Sun and Saturn
of center and height
and into the resonance of two elements
evermore-water with Sun
and son-fire
with Saturn
being immobilized
in museums and libraries

furthermore the coming lowering then
pre-dreaming
down into the ground of loving kindness
and further then morning wards
since Saturday
in the sign of  emergence
Geschrieben und gespeichert
16.4.2015 in Murnau
um UTC 14:37
gepostet:
UTC 16:10.
In English 2.18.2015, UTC 22:45
Eingestellt von mundanomaniac um 04:36 Keine Kommentare:

Great Solutions in the Mirror 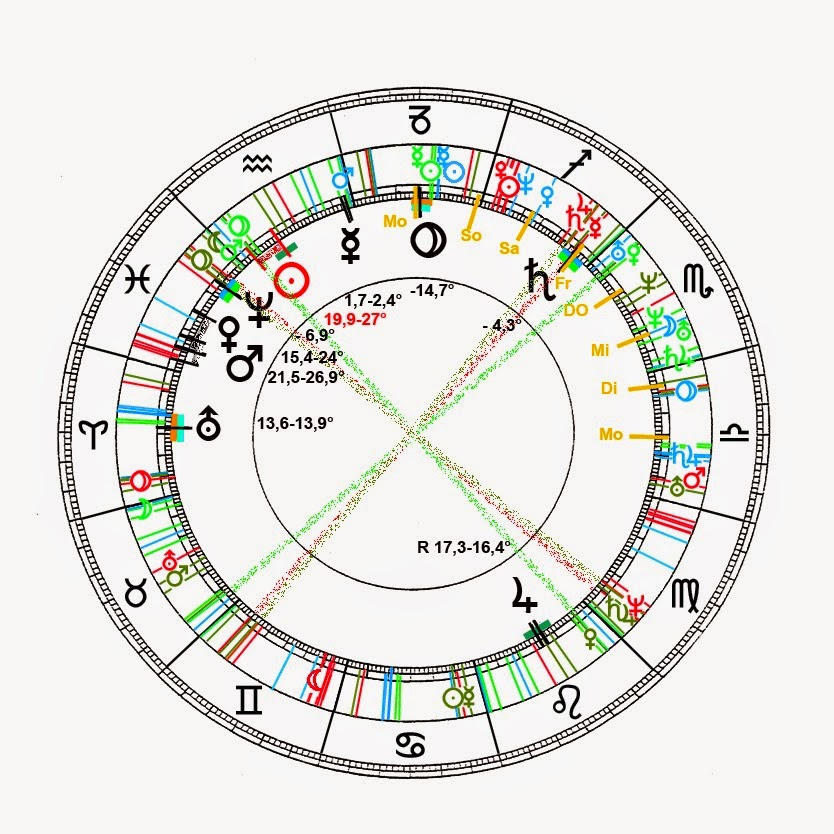 another Saturn-Neptune-week
most significant
as preannouncement

strive between now
and always
strive among gods?
do gods ever travel
without respect with
their kind
like in heaven
but alas so often not
on earth
strife in humans
for the sake of will
the refusal of respect on behalf of those
who alone deem to be chosen
for divine rule 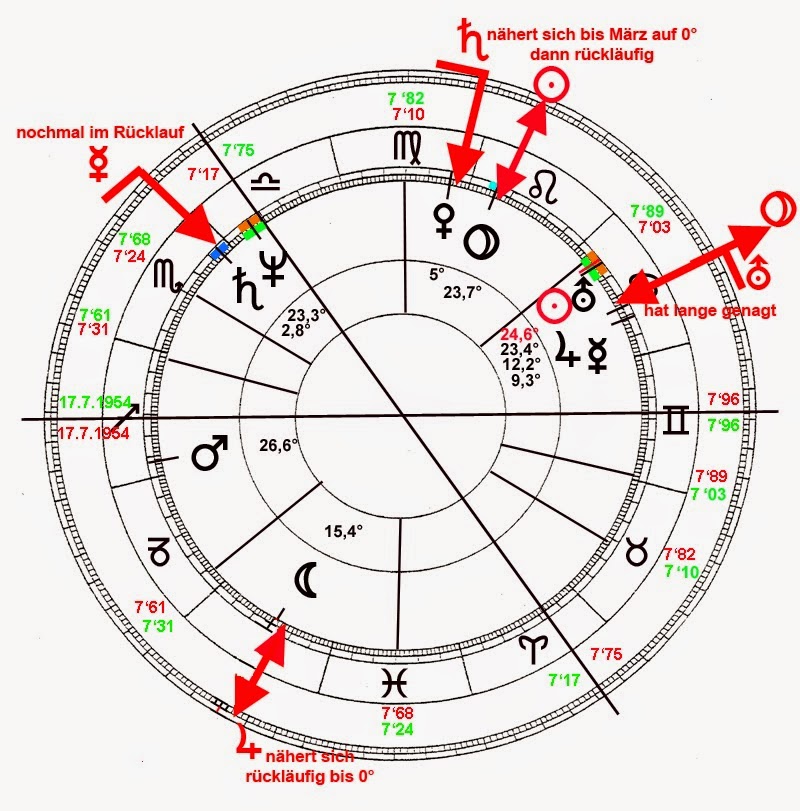 in the north and in the mountains
of every psyche
remaining at home in Capricorn
the hunting of Pluto
is facing the despiser of the fathers
- the devouring father-dragon -
under the banner of St. George
offering the sacrifice
of the plutonian psyche

...Venus still today (Monday) at 16° Pisces exactly in the mirror
of Uranus in Aries

coming Sunday the Aquarius - Sun/heart in the sky will be visiting
a moving age-old "green" place at 26,6° Aquarius
the sacrifice offering "green" Pluto of the element water
which as offerer deep below of our feelings since 710 years
is accompanying  us to the
felt god-freedom in waiver 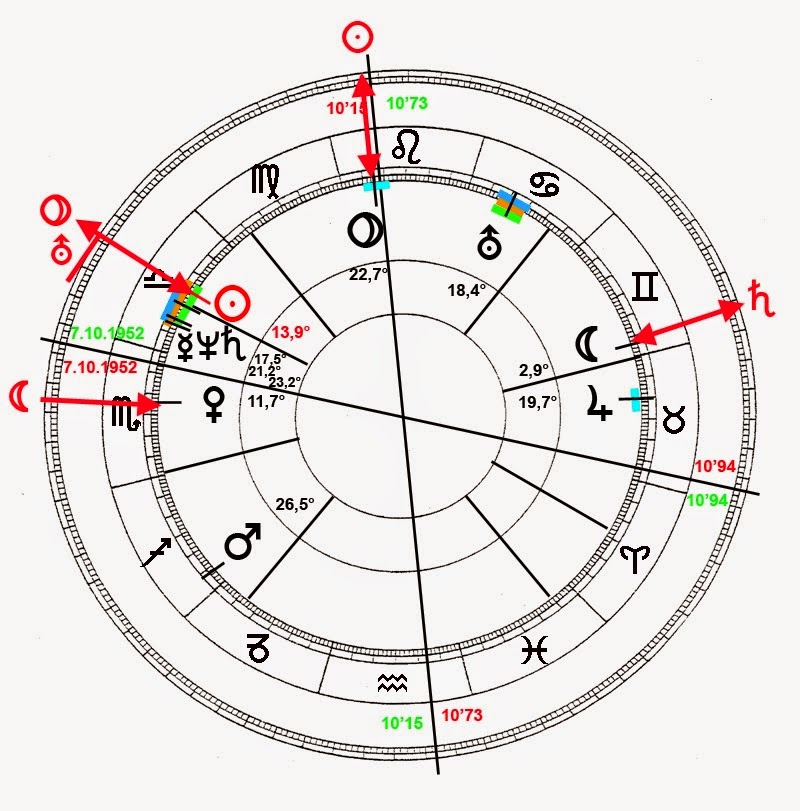 As it is evident there is nearly exact resonance between Putin's Sun and Merkel's Jupiter
as ruler of her ascendent. Both they are in perfect resonance with the big square of presence:
between Pluto and Uranus, between freedom and force, between Aries, the eternal new and Capricorn, the eternal old.
His ascendent-ruler and her ruler of house 11,  Pluto by contrast enjoys the opposition to the Sun of the day.
Each opposition finally is encounter and completion of halves to wholes.

And also on Wednesday - meeting of four in Minsk - Sun in opposition to both of them, Pluto of Putin and Merkel, while Putin's Pluto is very near to his MC.
Thus Putin's essence (ascendent) and destination (MC) are almost identical in the waiver for movements beyond the collective interest.

when after that
two days till Saturday night the right - angularity of the perpendicular  Jupiter light  woos the moontired into visions of conciliation and diversity
till awakening on Sunday in Capricorn above the nadirs of the emotional existence.

Jupiter in Leo Looked at by Sun - to Comp Reconciliation 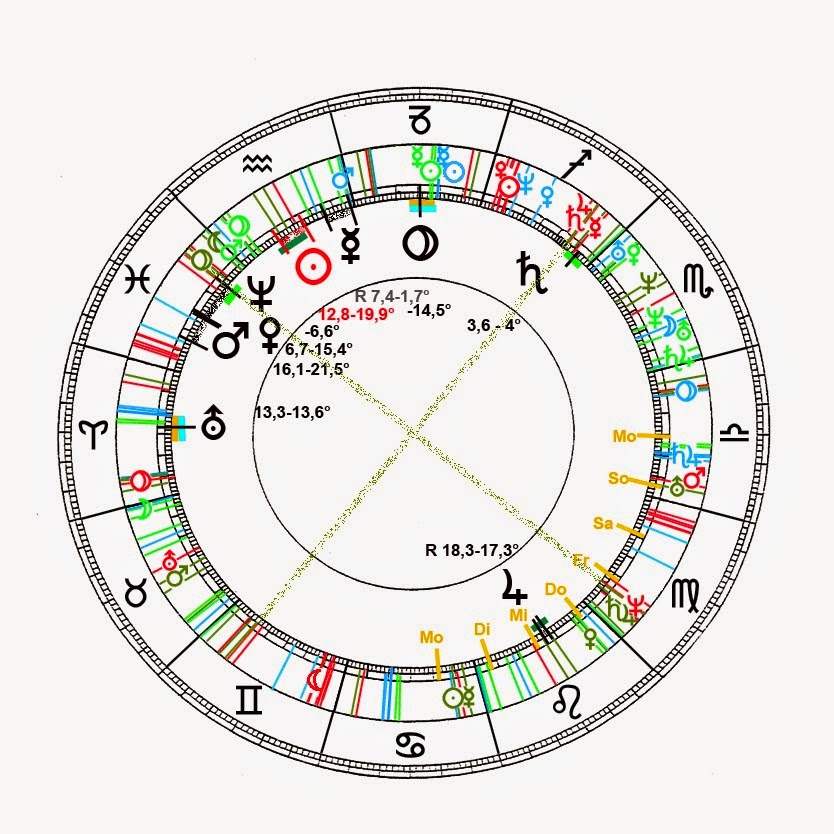 
may we bear in mind


and the current
Neptune/

Neptune
future of everything
in Caprucorn
state of future 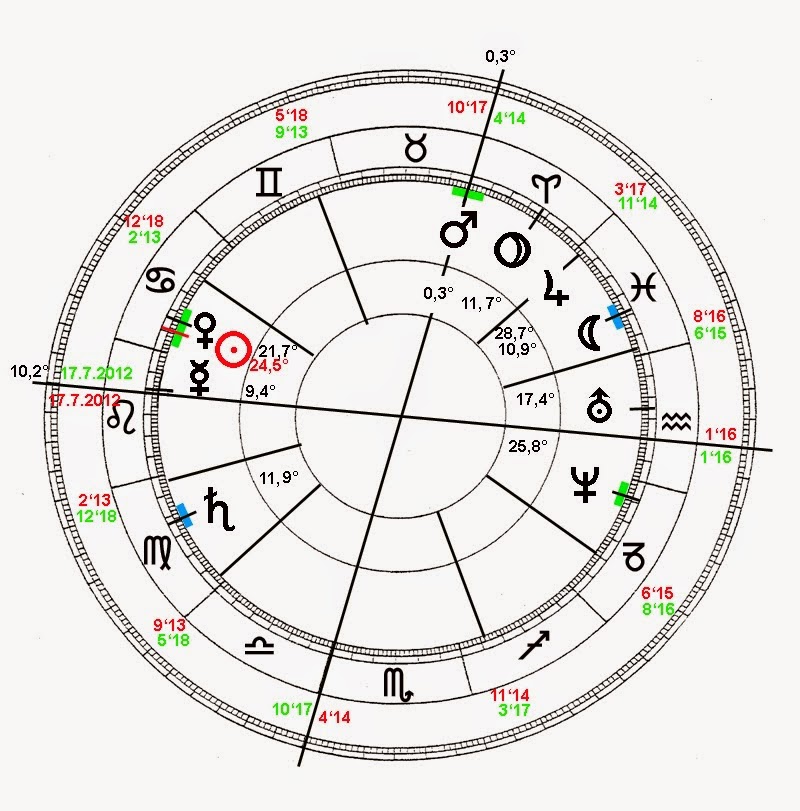 the lot of time
thus is immersing in the sea of all times
and as stream rises new
over the horizon of the 1. quadrant
always
Holy meaning 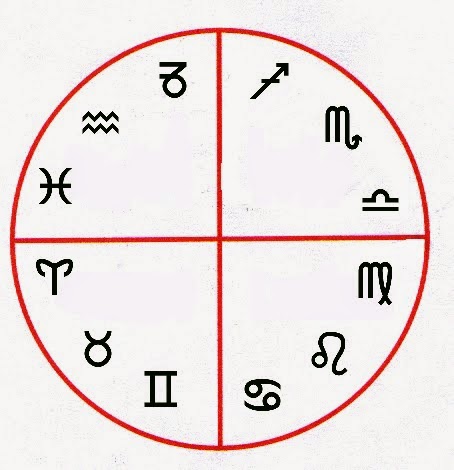 ... while Moon yet this evening in Leo is garnering the souls for hero's journey while asleep
with the sons of the tribes
for only Friday then to ride into the night illuminated through
the shady corners and channels of disbelieve
above which Virgo has spreaded her nets


*) "peoples-capitalistic" is an attempt to comprehend the russian/chinese kind of capitalism as a kind of
state-regulated economy with a strong vector towards to the people.
(see: http://eng.kremlin.ru/news/23566)