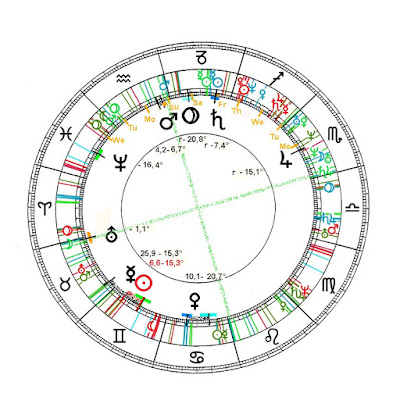 "Religion is so much interwoven into the
therenessof the older and simpler mankind
that it doesn't constitue a special  component
of it but inhere it as  vital spirit all of it's  shapes.
In the progress of the spiritual culture it  unfolds
to the lucidity and grandness of the forms.
But the striving for autonomy, which this process
partakes of, leads to a  distinction of the holy and
the profane, which  ultimately becomes to a
absolute contradiction."

The zodiacal man doesn't maintain this absolute
contradiction any longer, as well as the physics since Bohr
and Pauli, but the complementarity as an original given.

what tells the chart?

generally
no relocation this week?
sure, one, Mercury today on Wednesday
enters Twins
his 'native' realm in the space

Comment: by this entry the conditions in two signs change from partisan = Taurus to impartial = Twins. The new impartial  'airy' condition meets Mercury's first realm in the touchable physical space and in Mercury's second realm Virgo's earthbornness in  the feeling innerspace called soul.

This is the mystery of Sun in Twins 'the Donald'.


in the mirror of the zodiacal man
telling  the low fifth Leo
what heart has to create:
Jupiter = the funnel 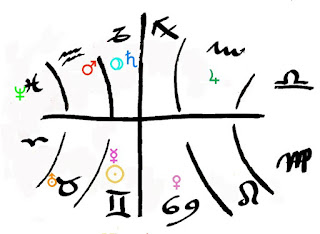 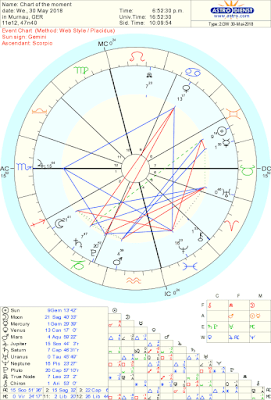 Adventures in the Open Space of Twins 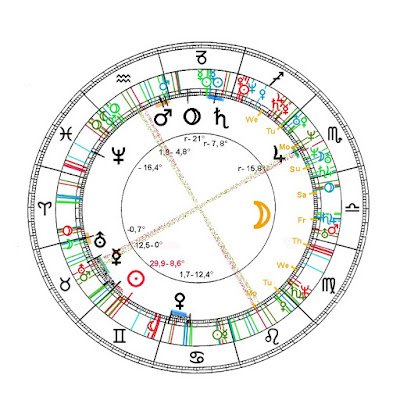 "There is anyway no other possibility, than to recognize the
irrational as a ncessary, because always present psychic
function and it's contents not as concrete (that would be a
step back) but as psychic realities - realities,  as they are
effective things, i,e,  realities. The collective unconscious is
as  condensation of experience and likewise as an a priori of
them an image of the world, having established since aeons.
In this image certain traits, so-called archetypes or dominants,
have emerged in the course of time. They are the rulers, the
gods, i.e. images of dominant laws and principles of average
regularities in the  course of images, which the soul again
and again anew ungergoes."

C.G.Jung, The Archetypes of the Collective Unconscious, § 151

Question:  to beginn with the specific or the general?
I start with the latter

both living within , better underneath and above us as a nano- star-family

* first full week with Uranus in Taurus for 7 years

* second week with Mercury in Taurus

What does the zodiac of heaven 'tell' us to it?

Uranus in Taurus: Putin,  concerning the  Stalin-Ribbentrop-Pact of 1939, emphasized, one has to understand these things out of their time. Uranus was last in Taurus 1934 - 1942 and yet saw  the defeat of the 'Blitzkrieg" ahead of Moscow. Uranus is the toppler, air-spirit, originator, lord of Aquarius. 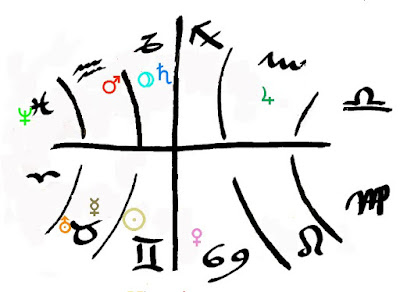 Mars in Aquarius ( every 1,6 years),  beginner, starter, discloser, opener of closed doors, ruling  now from heaven as 'fiery' potency of Uranus in Taurus.

Venus in Cancer, colletoress, social lap, goddes of association,  defense, savings and roots in the earth and Libra as goddess of the dual form of opposites = love.

Hence ruling what is moving in their realms within zodiacal man and zodiacal woman underneath and above of our conscious awareness - unless we are homi astrologi.

Mercury in Taurus, story-teller, discerner, performer  now within the social herd and by Venus in Cancer's intimacy of Moon's traveling feeling.

Sun in Twins, the warm strong center of the family now as potency of Mercury in his discernment
within the Taurus = tribe of the zodiacal man and woman 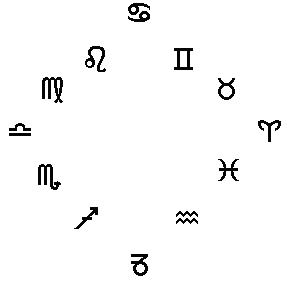 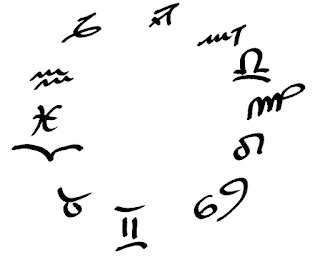 Now with Sun, the heart is in the traveling-time of Twins, as potency of Mercury under the northern sky, (under the southern sky the heart currently is in the time of Sagittarius).

Twins is the airy realm of open space beyond the settlements, where Mercury is 'personalizing' the archetype of curiosity, and hence knowledge,  roving land and seas, hence connecting the neighborship. Families are planning adventures in the open space.

The orchestra of the week

Finally no news from Pluto and Neptune.

Dislocation of Energy in Seven Characters 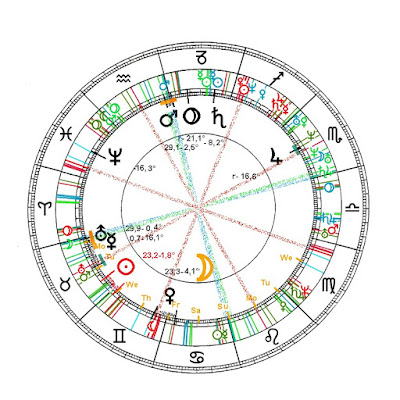 "If man would live merely instinctively and automaticly
the dislocations could ensue according to mere biological
laws. A touch of this is yet to be seen with the  inner life
of the primitives., which is  at the same moment entirely
concretistic and entirely symbolistic. With the cultural
man the otherwise so useful rationalism of the conscience
proves to be the heaviest hindrance for the frictionless
dislocations of energy, whilst ratio always, to avoid
her unbearable antinomy, poses itself on the one side
or the other one exclusively and tries to clutch to the
once chosen values and again as long as the fact of
human reason takes effect  as " unchangeable
substance" and by this it's symbolistic  perception
is excluded. But ratio is only relative and suspends
itself in it's aninomies. Also it is only a means
expedient , a symbolic expression  for the
clearance point of an evolutionary way."

"Dislocations of energy"? What  is Jung speaking about? When are dislocations of energy asked for in our psyche? A journey, a removal, a new love, a child, all the cases describing changes in the shape of  visible and tangible outer circumstances.
And what is with the  circumstood one? The unique I-person? Which energy-dislocations are expected of it without being contingent to outer conditions, without the I-persons knowing?
Where it doesn't know anything about it, there they are lacking in the counscious conduct of life, in the conscience is only, so Jung, what has been introduced to it,
In physical lessons to our conscience the invisibility of magnetism was introduced by the use of  ironfilings. 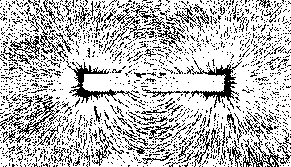 With this discovery the gates were opened for the making-visible of the invisible.

The naive herder of the 18th century didn't know anything about physical lessons and of the visibility of the invisible, bur his heart 'knew'  about the magnetism of the souls like since any beginning.

Now we on Earth are living in the gravitational field of the Sun, reaching far behind Pluto, a shining family-island like millions in the Universe.

If I' right, it is undiscovered, which invisible effects on the physical and psychical life on earth these resonances have, which constantly between Sun and her planets swing to and fro, as we ourself are special animated resonance-bodies with age old antecedents between 'god' Sun and our 'god'-siblings with their 'magnetism', Earth herself a spawning 'goddess'.

The opinion of the astrologers and alchemists was and is principally this: "like above so below" or "like outside so inside" hence that inside of us  exists a psycho/physical counterpart, in which the star-family is mirrored with the Sun as our hearts.

That's the meaning of the astrological enlightment, having to introduce the invisible 'wheather' of the Sun-family
to our conscience.

In heaven namely the due energy-dislocation are to be read exactly to the minute, to which an equivalent in us should ensue ,like it did, without conscious knowing by the primitive men.

This week from last Sunday to coming Monday seven from eleven signs/realms are experiencing "an energy- dislocation"
according to their rulers, the planets and Sun.

(A spacial case in Cancer, cause to ruler Moon the 'dislocation of energy' is routine, re-distribuing her energy every 2+ days.)

They are slow and fast rulers which enter new realms. Beginning with

if we know it or not.

Whom does this happen to?
Answer: to our collective soul
deep and above
our conscience
guided by the laws of the universe

Well, according to the dislocation of their rulers, conditions change with in this week in

constantly are remaining this week only 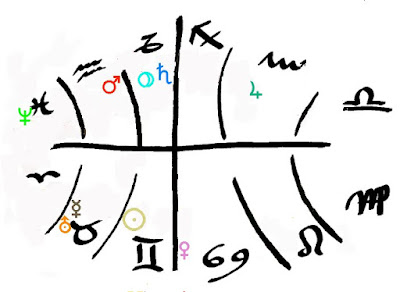 in addition to said dislocations there are resonance.- complexes of planets/gods
1. with each other
2. with them in Kingsconjunctions
in the four elements

to 1.
the week started with the square-resonance
of Mars
with Uranus + Mercury
and their common
dislocation
hence now we have
start = Mars of new thinking = Aquarius
of new ideas = Uranus in  community = Taurus
+ new talk = Mercury in community=Taurus

Mars starting in Aquarius
immediately receives the push of the Kings-conjunktion
blue Mars at 0,8° Aquarius
as resonance of the air-element since 1980
since the Kings-conjunction of Saturn and Jupiter
in this element.
here

and this resonance is in common complex with
the resonance of the Kings-conjunction
of 1305
the latest one in the water-element
and it's green Moon
at 0,3° Taurus

Beautifull spells blossoming this week invisibly, but alas, only they will 'see' them, who follow their heart to the
talk of heaven, only to them the trasure is open. 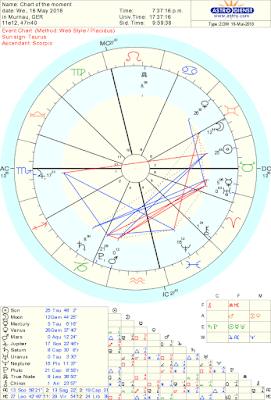