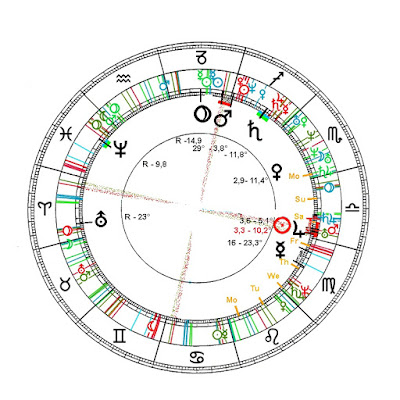 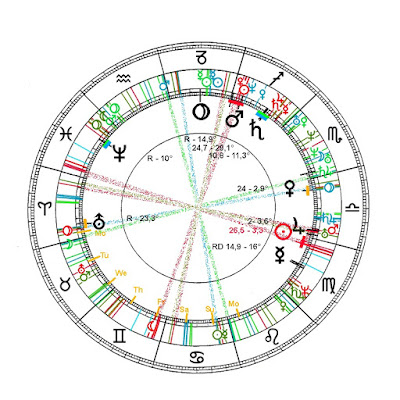 Two Sqares and a Juicy Opposition with the Gods in Offer 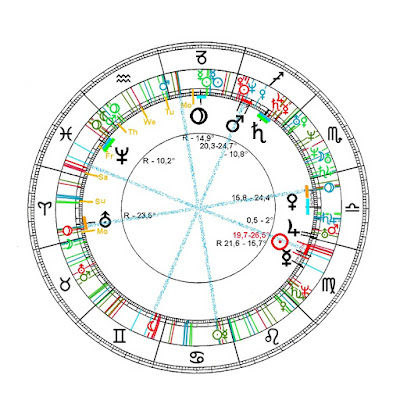 Maybe not said at this place:
this is my weekly chronicle
before God Himself
this is probably not
liable to mental hospital.
Who feels like may read along.
"If we ... label God as archetype, so is nothing
predicated about His actual being. But we state
with this the acknowledgment,
that "God" in our the consciousness
preexistent soul is earmarked and hence
can in no way apply as an invention
of the counsciousness.
C.G.JUNG , Erinnerungen ..., p. 350

and on Friday Mars meets one of the Gods
of the four elements: the young blue Neptune of the air
child-spirit archetype  of  the Kings-Conjunction of 1980
for about 800 years at 23° Sagittarius

one can also say bright blind Mars = wave/push
brings the child of water this Friday this flame - up - event
a collective event in our spiritual fate
an acute event at this place in zodiac every 1,6 years

now what elso do we have this week?
Venus meeting again another blue air - God
on Sunday now blue Pluto of the air
our spiritual sacrifcer since 1980 at 24,1° Libra
great rooting  withstanding and and harmonizing
as is Venus' double-nature together with Plutos self conquest
and while in resonance with air Pluto
Venus resonates with Uranus from Libra to Aries
and vice versa at weekend
it is origin of man = Uranus and securing the ego
and harmonizing it by mating = Venus
which is  connected with the sacrifice = Pluto
of the wildfire of love
in favor of the heat of a furnance
in marital heat


while
Mercury turns back with his tools
and his precision in Virgo and to his diaposal
are the presents of Sun in Virgo who knows
that less is often moreand what else?
we are not ready with Suns virgin
resonance of our uncncious center
heart
this week at every place under the
northern hemisphere in resonance with Mars outburst in Sagittarius like
mentioned above
on the ground of fire and earth
Sagittarius and Virgo
connected by
double fire Sun and Mars
start and center
uniting in paradox unity
between religio and  ratio
UTC 14:48