The Fortune Migrating to Venus' Libra 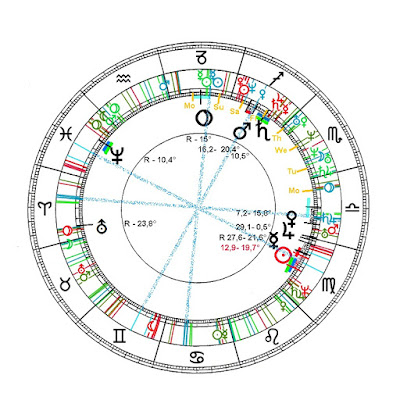 9. 5. 2016
something decisive was happening to Sun in Virgo
with resonance from Saturn in Sagittarius and Neptune in Pisces
it's Virgos-earth rational resonance from nearness to the center of soul which is Leo
it's Sagittarius-fire resonance down from height of meaningfull conjunction
and Pisces-water-resonance up from the depth of psyche carrying the concious person
last weekend
tied by Sun Saturn and Neptune
this weekend
the other Virgo- variety of this late summer will perform
Mars  + Mercury  +  Sun in a Trio
where the squandering God and the talking God
Sun and Mercury
meet in the resonance of Mars
the God of all beginning

So this  "trio" is a non-temporal vehicle which can be entered by us temporal ones
legend: signs and Gods are nontemporal tools of meaning
like numbers and geometric formes
mirrored by stuff
and this trio- thing will happen in the sixth mirror
where  Virgos reason mirrors Libras harmony
in which Venus right now rules in her "airy" temper
and is aproaching the quare with Pluto

and - more about Venus -
end of September eonic resonances of the Grandola-constellation
(sorry text yet in German only)
are awaiting the mating God
encompassing with his grace all  fairly sharing at the scale of the sexes
and is waiting since 1802
the archetypal spiritual
earth-potence
of the dark Uranus
at 3,2° Libra

and the archetypal elementary
fire-potence
of the red Mars
since 1603
at 4,2° Libra
as mentioned: surging against end of September

and not to forget are the visites of Mars with the blue Venus of the air-element at 17° Sagittarius and of Venus with blue Saturn and Jupiter of the air on their common high ground at 9,5° Libra in the first half of the week.

And now about the daily alternative gender of the light, the large light of the night, which - other than the Sun - conceides enough darkness to the smaller lights allowing them to be visible.

Moon is the alternating experience of the night. He hence concurs with the sexuell experience of the primitive, with the woman, which to him likewise is the experience of the night. But Moon also can be the disadvantaged Brother of the Sun, cause in the night affective and evil thoughts of power and vengeance are disturbing the sleep. Moon is a sleep-disturber, he is also a "receptaculum" of the deceased souls, cause in dreams the dead return, and to a fearful sleeplessness schemes of the past do appear. So Moon also has the meaning of "lunacy". Experiences of such kind are those which are stranded by the soul instead of the alternating image of the Moon. (C.G.JUNG, Coll. Works 8, p. 350)

Moon has just now - while writing the chronicle on Monday - moved from Libra to Scorpio, while here the chronicler dealt with Pluto.
And yet on Wednesday night happens the next relocation into the bright night of the south in Sagittarius where the arrow of the Sagittarius of fate hits in the encompassing circles into the black center - it's not that it' s a white one. And still on Saturday morning Moon is movong through this swift and fiery sign.
But then, for the rest of the week it's up for Moon to shine under the sign of barren heights of the wiry  Capricorn.