Son of Heaven Now Ruling Sun and the Brunt of Planets 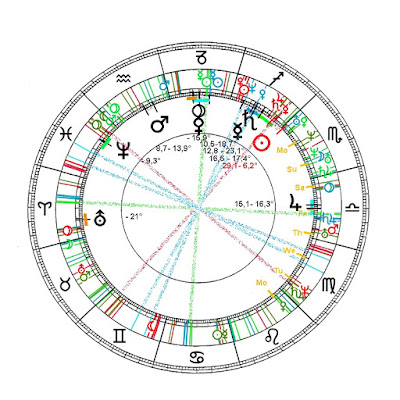 
Scorpio heart aka Sun in  this sign
disposes the heart as center of negation of randomness, formlesness
so Monday was last day for the presents
of Scorpio


Recently I compared Sagittarius with a funnel and Capricorn with its nozzle. And between the two is suggest the  timewall and the nozzle is the "door" through the time wall leading the being from here in time to beyond and the meaning  from beyond into time.
Nowadays the "nozzle" moving in the funnel indicating the broadest of the 12 kinds  of nozzles.
And "nozzle" Saturn today on Wednesday is visited for conjunction = "riding together", by storyteller Mercury being all eye. And in their union they appeare as heavenly word = "beginning",  mirrored by the ability to talk and  end of being mirroring, remaining as name
and in this combination Mercury looses his easyness and levity and richdom of words.

And one layer deeper underneath (or above) of our consciousness, in the realm of the four elements, Saturn + Mercury, while meeting, visit "blue" Venus of the air element of 1980.

So these two are in for the balance between, say: ego and  mankind, deep underneath consciousness.

Back to Sun
heart of each rhythmical organism
in Sagittarius since Tuesday
what does that mean?
Sun
radiating bright center
calling for the birth of children with an abundance of intuition
and a trajectory sense for right time
to meet the knot
hence appearing in the symbol of the arrow
called Sagittarius ruled by Jupiter
masters of reconnaissance

These amazing spirits have the time-arrow from before in time to the task in time on the bow of the Sagittarius.
The resonances of mans heart these four weeks out of  Sagittarius are a splendid time to do the right thing at the right time; called reconcilliation, uniting the given potencies like the clock - hand, pointig at each second and each hour in equal length, a brilliant time for blessed ties - such as for the blond hero in America 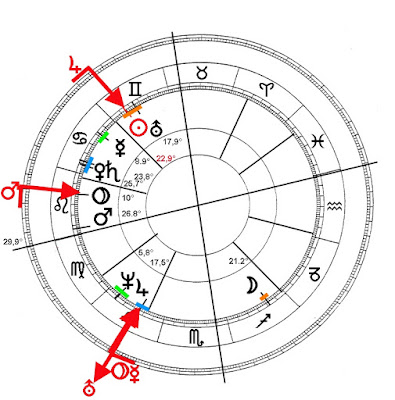 Donald Trump
in red Inauguration am  1. 20. 2017
12:00 EST
He has in Sagittarius his Moon  in his "lap" = 4th house, ruling his "heaven"= 11th house, in the name of Cancer = heavenly Family. Agreed, with such a Symbol nobody might walk along cause of astrological ignocance.

In Moon of his birth-moment at 21° Sagittarius, his inner  feminine sensivity, is mirroring the smart brother in 8,9° Cancer, a Mercury in a receiving stage, someone, able to listen in the quiet 4th mirror of the zodiac.

The four squares by the way, these red right-angled arrows, signifying resonances to and from the two 90° angles of the signs/elements in the zodiac, therefore squares = irritating meddling of the elements withanother, to be stirred into a livable symbol of togetherness of

dream
bird
fruit
bee
blossom
leave
branch
bough
stem
root
worm
mouse
As well the union of  contradictory elements/signs  in the shape of "opposition" to which the contraditions do strive in nature like tinder with oxygen, or clay with water whereto then air joining and fire allow the holy paradox union of the four elements appearing as jar, pot, and bowl to be created.


Also by the way we know Mercury to meet the Moon of the hero on Friday of this week, what a day for Mercurian distinction and utilizing in favor of the anima of his community,
best day für a linkage with the receiving mother of ideas = house 11 in the close relation with the "blue" Neptune the liquidator of old and pregnancy with new (old) meaning.

This week now great resonance to and from Jupiter out of the beyond of changing = Capricorn, where Venus moves through a remarkable resonance of the year.


And at weekend Venus is entering a good part of the resonance, culminating next week with Uranus in the square in Aries, this resonance connects Venus with the rising spirit of man, rising in the sign of spring.
Venus = the heavy earth and = the light air personated in one God/archetype connecting matter with idea, heaven with field, second mirror in zodiac = borderlessness mirrored by social association, in the connection of word and act, whereby Uranus = mans planet  in the first mirror mirrores the innocence of Neptune = child of man.
And on Sunday Sun is in expecting condition: he shall give "birth" to the "red" Mercury of  fire of 1603, the general beginning of talking in Sagittarius = concilliating words and linking fiery talking on our aeons level with the heart  of the concilliator.

Eventually Moon our light in everyday, symbol of the  feminine, receiving  sense  equalizing
the neurotic obsessions in the  light of the day with dreams and intimacies of the night, being

since Wednesday evening in the chances of Virgo,  changing the felt into the spoken at that place, where Mercury is just moving;

then till Saturday before noon Moon enters Libra and the soul meets public resonance with those beyond where Venus currently gathers;

on Friday morning finally till into Monday Moon = the lap, in Scorpio = sacrifice of randomness and formlessness.
And really in the end now Mars the beginner for whom in Aquarius is carnival in the paradox sense of sublated heavyness: freed of strange resonances the winged spiritual predator espies his prey in the mirror of earth, the rodents on the ground of facts in the settlements = 2. mirror: Taurus under the sky mirrors Aquarius.