Cooking the Election on Red, Blue, and Green Fire or About the Deeper Layers of Amerikas Vote 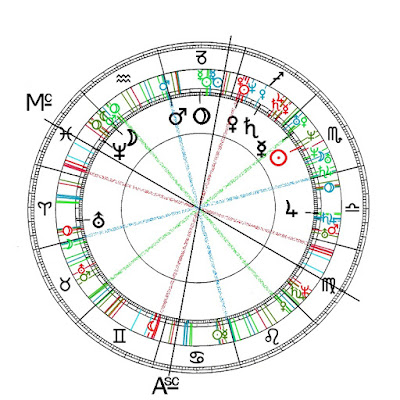 A Minority of the people acted as the qualified majority of the voters, thanks to your for-fathers from times, where still was time for thinking.
Incredible, a tumbling like Leipzig/Berlin 1989 world-historicly
but muuuch bigger, Amerika, a national discontent in the continent
the "the american redneck" did it, never seen before: middle class and lower class united in the heart of the continent. A strategic defeat for Satan  of apokalyptical dimensions.

Now up in the chart we have the true unconscious resonance powers leading the instincts on the continent on the November 8. like  high jet streams lead the airmasses near the ground.

If you follow the dappled resonance-maxima you reach at the  3 places
where Mars- Venus- and Mercury- resonances add with those of our unconscious aeon of relativeship with the dead unconscious relatives.

*
Speaking of Mars: the blue Mars for 800 years from  December 31.1980 , the Mars of the air element at 0,8° Aquarius he is in morning of the 11/9 ready with his energetic shocks by the father. The ballot on 11.8. had Mars on the last grade of Capricorn like a blizzard over Florida. Now on the first day after blue Mars' blind thinking united with daily Mars and his blind impatience. Blind? Shure, the first, fire, Aries, Mars is without any experience.

Speaking of green Venus: The green Venus of the "feeling" element water ist visited and united with the current Mercury our God of talk and management. Venus is a collectress, green= water= feelings; Venus is collecting the feelings of the social fate since 711 years.
As  Mercury likes to share feelings in communication, these unconscious resonances transport feelings being very old, feelings stemming from all generations since 1305.

Now, that's the best, Venus our current evening star was on November 8. in the full resonance of fire together with our relatives since 1603
Venus united with the Sun and Venus of the fire-element on 26. and 27.°  of Sagittarius. Fire is ire and the ire of Sun and Venus is coming from the heart
of fire, and from the tribes of fire.
Fire is beginning.
And beginning is not only the leading center = Sun but also the tribe = Venus.
And beginning with what? What "fire" does Sun/Venus in Sagittarius  provide? God's order coming into time in souvereignty = Sun and in strenght Venus = tribe
and this resonance from the depth unconsciousness unites with the consciuos ire of moving Venus = the present social body.

And if you, without dapples look to the Moon, you will see the mood of the people mooving with Moon united at the end of the ballot old "green" ire, green Mars= ire (again) of the water = feelings from 700 years  and olive Moon of the earth element both in Pisces accesible for people who are in their hearts true adult childs.

So this was the unconscious  height- and depth wheather under  the northern psyche while the ballot was cast in America.