Genes of Meaning in a Blue Green and Red Week 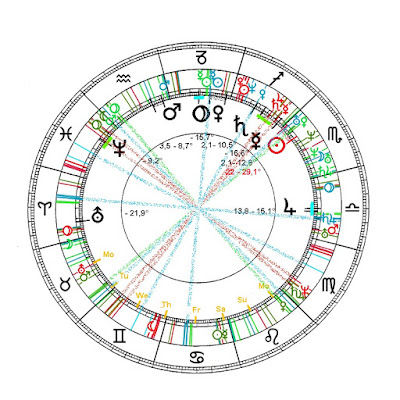 
11. 14 - 21. 2016
Maybe never Scorpio was more important to us mankind and his ruler Pluto. Why?
Well, each user of an e-mail account knows, how essential for survival is the 'delete' function for survival as a distinct address.
Millionaires and wanabies constantly are invading us, our brain even more than our wallets.
To keep our brain clear we need Pluto and his sister Scorpio.
And to practise waiver.
Scorpio is the power of the waiver, gene number eight of the 12  genes of meaning in accord with the  completeness of times in months and the non-temporal zodiac filling the times with meaning.
Scorpio and  Plutos order "delete" has the meaning: sacrifice! What from?
Deviation from the canon = (zodiac). Watch Nietze thinking.
This number 8 is waiver = E - eight  in zodiac - Emptiness in the cicle = circle
And know: place is meaning, the universe is ordered by this: circle = canon.


"Delete" keeps deep under our consciousness in the divine stream of universal thoughts the canon as the second coming of the water. Delete ist the water of the soul, to clean away harmfull deviations.
Delete keeps underneath our concious realisation the divine Form of creation in 6 days of the heavenly creator mirrored by the 6 days of the dark earth keeping the non - temporal order of the spinning 12 in every plant, every animal, each rock each river and each unconscious permanent ordered mystery underneath each sensual consciousness of man adam with his non-temporal companion and monitoring "grater person" Selbst and the inner companion "she" in God's command.

The 8th stage, the Scorpio-stage is the form which comes into being when two circles unite into a common karma and adapt the form of common vortex in which two poles in each circle rotate reverse. If they are sound.

In biology it's called constriction and partition and only happens with strict compliance with the succession of the stages. So Scorpio with necessity is the "natural" opponent of Aquarius.
the eleventhin the succession with equal rights (at his place)

So compliances with the sucession is guarded by the Scorpio, provided sound in the heart = Sun and underneath of our conscious sensual realization by instinct those of us under the northern sky born in the 2 hours 48 minute every day (median latitude) where the Scorpio-nature appeares = Ascendant (ASC)
Living paradigm Vladimir Vladimirovich Putin

Psychic agency of Scorpio:
The thinking in pictures becomes clean from  evil overlay. Where that is missing poor zombies are "slouching to bethlehem" starring at their overlayers squatting araound, may Gods miracle reach them sleepwalkers one day.
They are engeneered to crate constantly Hollywood in all shadows, preferably at the east and westcoast as "critical" "tolerant" philo-jewish citizen of the world-comedy, currently as purple Maidan in the blue States of America. The blue is in the west the colous of the greed of merchats and robbers. The Programmers like Geroge Soros with his global campagning organization are e - xercising the American Maidan = the real global nazies in every soul and they are doing it constantly with all the $ of the divine son (Joab) and Attempter tho fix us another time on the cross like the unfortunate Ukrainians.

We are in the last of the four weeks cleaning time of the hearts we all and in abundance those, born below Sun in Scorpio. Their hearts are centers (= Sun) of waiver.
And we all are Scorpio at the  "habitat" (position) of our Pluto in horoscope, and we are Scorpio within the authority of Scorpio of a house in our chart.

Scorpio ruling house 6 then would mean: adaption by waiver.

Now back to the realm of pictures, waiver of the overlaying "left =Aquarius" = sovereighnty in right.
The left has no busyness in the realm of right.
The Left has a busyness in the realm of art and philosophy and seeing in which Uranus might bring man towards  individualisation of ther greater companion "self" spinning within in and around the ego.
Now to more of the week:
On Wednesday night and Sunday are to pass following moments  of waiving hearts in resonance with the feelings of our deep elementary aeon in which we share our fate with the fate of the elements for about 1.600 of years succeeding.
In this diary each week we are confronted with something not physicly percible under the label 'The secret life of the elements". In a time beyond, when the elementary knowledge of astrology has advanced, still will be attempted to replace the priciple of complementarity and attraction of the opposites with unipolarity= exceptionality or unconsciousness of the self. Sun in Scorpio has the medicine. And he will be with age old feelings today as Sun is uniting with the "green" Venus of the water-element since 1305. Venus below conscious perceiving is social instinct. Water = within.
Venus, the social instinct in the shape of the fourth element. A band of mothers in men embracing and being embraced by sacrificing heart at Wednesday midnight.
And on Sunday Scorpio-heart with the "blue" Uranus of the air element of 1980, the youngest of the four elements of our aeon. Left Aquarius= free spirit is looking for the hearts of the artists.
So much for Sun and his way through the week.
Now after  Sun= heart rising left in the east under the northern sky and rigt in the southern sphere - while looking towards noon and equator.


Now whith what to start? Easy cleared: entitlement in the succession has Mars,   the planet of Aries lord of all beginnings, the red colour of the blood of hunted life, birthing mothers and sacrificing sons.
Mars now is raging under the command of Aquarius hence the unconcious left underneath the collecive psyche, not to conflate with the conscious left and their blinkered mind projecting supposed divine ire.
Mars' time on Aquarius' stage lasts another 5 of 6 weeks. Might be possible to overcome.

Jupiter in  Libra arrives in the sense of uniting contradicting forces in the resonance with Pluto in Capricorn. Libra number 7 in the succession, has the two scales moving everyday in a communion of two. In the depth of psyche it is the order of completion of two different parts of the same karma, aka love. Jupiter in Libra = throwing light on love.
Pluto in Capricorn= sacrifice in the spirit of the (collective unconscious)) father.
The new authentic left just emerges in Aries mirroring Neptune in Pisces as the beginning of  the paradox square of Jupiter's spirit of reconciliaton on the middle continent of the middle class = Jupiter with the lower class = Scorpio in America = advantage of conciliation together with waiver of randomness.

Gods as children of God (Psalm 82) dont fight but harmonize with one another in paradox squares and unions of contradictions in word,  image and aound.

Venus now in the sacred succession of the zodiac:
she the divine  wanton neighbor of the faith, tempting in the art of the harmonious lie, endowing the social bonding and taking them at risk. Venus now in Capricorn is concentrated and sparing with words. Small baskets like in winter in the mountains.
At weekend Venus in the spell of the blue fire and the blue choirs. '"Blue" Sun and "blue" Mercury of the element air are waiting for the union with Venus on Sunday. So blue Sunday below our awareness. It is the element wind and of emptiness in the circles and around the circles that surrounds them with  balance, thoughts and distance.
This together with Sun at blue Uranus a blue airy weekend after 36 of about 8oo years of the air-quarter of our aeon.

Hot days Tuesday and Wednesday for Mercury = our brain in the first third of Sagittarius = Gods knots.
This week Mercury unites with the resonances of fire which at 4,9 and 8,3° Sagittarius at that place  since 1603  care for new beginnings of concilliated trade and judgement underneath our consciousness in our deeper unconscious psyche.

And to father- and border-God Saturn this week is something to say for the current two weeks: Resonance of Saturn with "blue"  Venus of air element. Time for fatherly care for a concilliated "conservative"social  thinking and conceptional setting.

Now finally to Moon, our shining nightwatching female light, mirroring in the sister, woman, mother, daugter and lover, in the waterfilled faults of mother earth the dream-hikes of our sleeping  soul.
Moon's week began in Taurus in the reserves of the settled being in boundary, construction and organization.


Then Tuesday before noon Moon moved into Twins and hence into the higher and more common practical points of view. Time till Thursday night.

Then Moon moves from the pragmatical area into the lap of the subjective, from brain into belly, into the home and well of the soul: Cancer. Here at home in the receivingness Moon till Saturday noon
then moving into Leo where she will stay till Sunday night.
That is the expressive stage of the mind, two days each month, where what was received wants to be expressed out into life.
Sonntag 13. 11.2016 UTC 18:57. Gepostet Montag 14 11. 2016 in Murnau, UTC 16:45.
In English Wednesday 11. 16. 2016 UTC 15:13