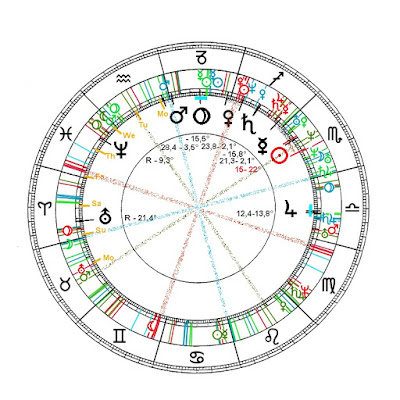 
11. 9. 2016. For the chronicler the depiction of the weeks has the meaning of an educations-work by our planetary self. But the self is unknown in our western tradition. It is the unconscious constant observer in the room which C.G. JUNG mentions:

" Consciousness (brightness of day) one of the archetypes of the unconsciousness ... This not entirely simple circumstance originates from the fact, that the ego has the paradox feature, to be subject as well as object of it's knowledge and other wise from that, that the psyche is no oneness, but a "constellation", in which there are beside the Sun yet other lights. In fact, the subjectve ego-personality, w.o.w. the consciousness with it's contents, in it's different contents, in it's different aspects is observed by a unconscious or rather in the space of the unconsciousness situated observer.

My predictions are meaningless if they are not that: Time-dough for all of us, out of which
every single person bakes out "his" bread with each one with his and her singular spice.
This singularity of each person, "only one time in eternity" descibes an immensity of each livin person - only to compare with God, what ever kind of allmight in the soul of each one
of us carries that name.

So, what is to practise is the double-existence. To be here in time and likewise in  eternity
being with God.

going to work, to wife,  to market, to friends
in real time
and
around
acompanying  God
and his  female signs
and male movers
like
islands of being
within immense spaces
yonder
like the extra temporal
beyond the temporal
in the eternal mirror
of the Hun -soul
in the po soul


Part two
My "tools" are

1. The visible stars as giver of the names of the times: Zodiac is heir of our forgotten fathers, older then all known religions from India to the shores of the west the common heavenly clock face.
2. The moving ligths as the starry relatives of the artist Sun inmidst the living family.


and now the singularities of the week according to mundanomaniac:

Sun in Scorpio is calling this part out of the cosmic dough, which is provided with an relative abundance of waiver on randomness in favour of form.
Those  are born with Ascendant while 2:48 hours each day in the median latitudes and their
hearts are born between 10.23 ans 11.22 each year.
And in this week those hearts in Scorpio undergo the all-yearly association with Neptune of the earth-element for about  800 years (1802 - 2577) at 18,8° Scorpio. That will happen tomorrow on Thursday.

A-sensual astrolgy of the 4 elements is a training-field for the quaternary thinking.
Quaternary thinking and observing provides a helpfull layer considering muliplicita of 12  signs and houses between  heaven and earth, this multiplicity which only the unconscios self is able to guide from  inside and outside of the person.

And Neptune of the earth? Neptune's realm Pisces, indifferent in what element, is always
the upper half of the first  mirror- image - pair of the zodiak.With Aries earth shall reflect heaven's Pisces, with Taurus reflect Aquarius, with Twins reflect Capricorn and so on, and according Moses 1.
darkness covered the face of the deep,
while the spirit of God* hovered above the face of the waters.

In a way like God's love mirrore in God's ire, crying out of a newborne hungry life, and becoming a hunter and cutter of sharp edges and teeth in the character of Mars which yesterday for the last day in one and a half year did the extremy short cuts a la Jane of Orleans
Today now Mars entered Aquarius and since today it's time for the liberating slope cuts.
To be remembered: the oblique order in the greek antiquity.

And  immediately today is the association with the "blue" Mars of the air element of 1980.
This doubling of Mars with Mars /air-element then calls for the break through of a new way of thinking. (In German written on Monday). 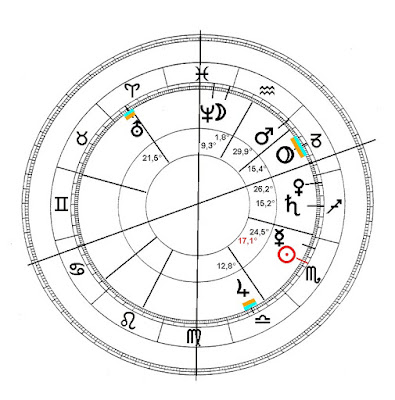 Venus now on her resonance-free way further through Sagittarius last days has undergone  the hottestmost grades in the zodiac:

Look at the chart, you will see the "red fiery mountains" of 1603 in  the first conjunction of Saturn and Jupiter  in a sign of the fire-element since 769 n. Chr. on December 12. 1603
borne at 26 and 27° Sagittarius. Look, and you see with Venus =  the social association
on poll-Monday on the fire-Sun of the fire-element, the first one in the succession of the elements  and therefore the beginning of the strong central act.

This place in Sagittarius is even hotter, as the fire-Moon  at 24,8° Twins is in good complementary opposition to fire- Sun and -Venus and the current Venus of the polling- day and Moon always signifies the lap of something like now the pair of spread red wings carried by the lap  of  Missisippi  with blue tips on each side.

Red wings are the  the wings of beginning.

Beginning of what? Answer Sagittarius = meeting the order of heaven, we call it "lucky chance". Thats ok, but in the sense of PARACELSUS who reminded 'that luck is only a narrative created by those, who use to spread their mouths to the north and to  the south to catch a flying rosted chicken like in Schlaraffenland', and added: there is no luck, that wasn't deserved.
And of just a kind access to this  is  Venus and, with her the social comunity, undergoing yesterday 11/9 in Sagittarius and hence Jupiter = the success in the fair scales of the circle = Libra


Meanwhile Mercury, our God or part-personality dealing with distinction, analysis and demonstration of details of the world (Twins) or relationships (Virgo) his last, third week in Scorpio and relocates into Sagittarius on weekend. So a step in the unconscious foundation of our brains from from waiver to discernment .

And today Mercury unites his talking light with the virtuell "green" light of this old Venus of 1305 ruling the Taurus and Libra of the feeling element aka water, the fourth in the success of the elements.
So, as Venus is = accumulation as well as = balance, now this one in the "green" way of water = reception, in Scorpio = the canon and coercion of the life-saving images, now, today associated with Mercury the hiking Archetype of words and numbers.

It's a thought-exercise of higher refinement, to embrace this moment to exercise for  centuries and more are provided  to learn the ways and and embrace God's attending sons and daughters in the sky.

And on Friday Mercury has the second paradox association this week with  "blue" Uranus of the air element since 1980 at 28,4° Scorpio.
This is a big paradox, as Uranus is the 3. = spiritual  God of the air-element
ruling in the sign of Aquarius God in man = man in God  in  the  beyond - sphere around  centers,  signifying the freedom for mutation outside of the order of emotional or social or material centers and beyond the form-canon of the zodiac.

And this Uranus = man's place in full loyality with Scorpio's necessities signifies a blue free spiritual space in dealing with waiving. And within the canon might be due a moulting  to keep the canon young.
So much for next Friday

And maybe the great planetary circles take care in the sign of Saturn = polar in Sagittarius = equatorial , like I read them, that the pol is warm and the south is cold
somewhere fitting
But as the square=resonance with Neptune snow of yesterday the coldness is to be a dry continental one somewhere fitting
*
The square=resonance of Jupiter with Pluto remains like last week

Now Uranus, Spirit of man  proceeding in the rising of man from the winter of sleep of sheep, while the real sheep are a brotherly peace of art of the creator. Now with Mars in his sign Uranus' spiritual brisance originates for later a day.

And like always the finish with Moon in the arms of mother night carrying the recharge half of a day
attending with Moon the lap of everyday's mother through our being - the femal place still existing in men - but within -
Now Moon in Aquarius- look at America, home in the air, origin in over-flying with a Aquarius weakness of hybris if unconscious = identical. 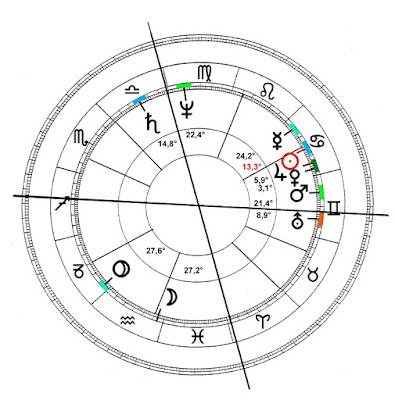 USA
4.7.1776
“Signing of the Declaration of Independence completed”

and Moon the traveling God of moods and mirrors has entered the land of chaos/paradise where all meaning emerges with other words:

and names are in resonance with laps like Capricorn with cancer
peak  resonance is possible.

so Wednesday in the depths of all solutions Moon underways with the feelings in the oceanic motherlap of life Pisces
and this in the  next to consciouness -positoned layer of mood and temper.

and back to the floor of realities Moon returnes on Friday morning, when the irritable climate of Aries receiving Moon again for it's two days and the struggle of the dreamers

finally ending in the first hour of Sunday being  replaced by the dreams while organic utilization coming in by Taurus the grasseating dreamers, poised to reflect the dreams of a Gods the upper waters called Aquarius.

So far the remarks of mundanomaniac ahd the chronicler, trying to demonstrate the unconscious height- and depth-water/wheather of the mater Earth and her inhabitants according to the Sun - Family in signs and times.