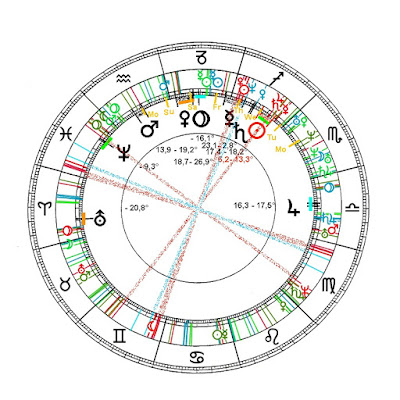 The surrounding of the consciousness, as Carl Jung once  manifested :

As much namely as man has a body, which principally
doesn't differentiate from an animals body, as much also
his psychology has virtually lower floors in which the spirits
of bygone ages of man still dwell, as much as the amimal souls
of the time of the anthropopithecus, moreover the "psyche"
of the coldblooded dinosaur and  deepestmost the
transcendental incomprehensability and paradox of the
sympathical and parasympathical proceedings."


There are these Saturn-Jupiter conjunctions every
20 years. The huge Jupiter alone has the mass of
2% of the Sun and 2,5 times the mass of all sister- planets.
Neigbor Saturn is the second biggest planet and still has 30%
of Jupiter. And in their meetings they create a rhythmical
resonance by the addition of their fields of gravity,
as far as I see: 1. directly to the Sun, 2. directly to us,
3. as reflection from the Sun to us.


True, another "red" week. Today is a  doubble doubble birthday of fire.

Not visible for our senses but in our astrological memory, our unconscious one, like each one's horoscope. Now this diary is a steady attempt, to make this 'memory' conscious.

As each person each moment is living the constellation of his birth-monent
so the "red" one in us, underneath our upper unconsciousness, is another "person". This person lives in an e - floor underneath the unconsciousness, e- for elementary. Underneath consciousness, our will revoked,  is purest nature.
So  is our aeon person,which we share like water and air, like earth and fire.

and
in our brain fire-Sun and fire-Venus
might find a conscious point, placed by Mercury
today  in union with heart and roots of the fire element.

hence the three signs of
Capricorn, Aquarius and Pisces
and their rulers  embrace the quarter of life of
preparation and  aftermath

while Venus apart from her ruler- "busyness"
is in square-resonance with Uranus
her mirror-Partner
in the second mirror between Aquarius and Taurus
or heaven and earth
so a significant unexpected sublation = Uranus
of Borders = Taurus
has  to be finding it's place e.g. in  Aleppo

and all here mentioned places will be grazed by Moon this week and with her the dream-life, which is placing to the conscious day-life a complementary light and meaning
and today on Wednesday Moon in Sagittarius takes place at the rich covered table of insights where the product is feeling + understanding = conciliation
while since Thursday in Capricorn it is the reduction to feelings and fundamentals
till Saturday evening