The Master of the Brakes Starts New Thinking 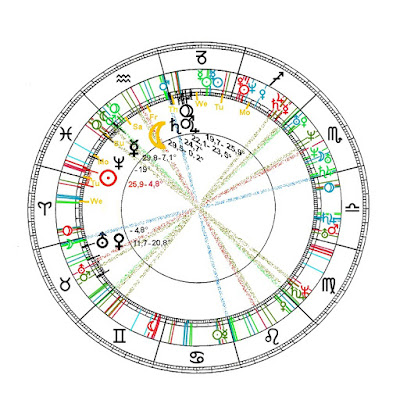 " The figures underlying the images become at deeper level
collective and universalized, loosing reference to specific
individuals, things or events. Encountering images drawn
from these depths, is like looking at the light of a star. We are
looking back in time. Just as the starlight seen tonight shows
us the state of the star, not now but millions of years ago, so
the deep images of the mind show us the state of the
human psyche in its early beginnings.
Farthest down in the psychic realm lie the autonomous functions,
that control the body without intervention of the consciousness
or even instinct. Below that the stuff of the psyche becomes one
with physical substance. We are left essentially with the chemistry
of the brain. At bottom, as Jung said, "the bodies carbon is
simply carbon."

So much for the first
of the three signs of Spring

second one is
Taurus
roots and balance
of things
and people

now look  our
'Master of the breaks' 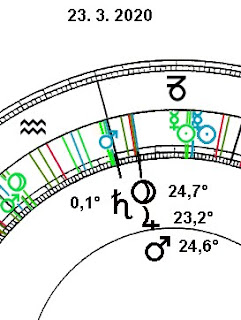 but since Friday
and for a cloud of days Saturn will pass
the  resonance-union with
blue Mars
of the Kings-conjunction of 1980
in the element air
on 0,8° Aquarius

an impulsive beginning of new thinking in the old brain


something for our calendar. The same went to Mercury, returning from Aquarius  back into Pisces. He might still have resonance with green Water- Mars and has it with earth-Moon today, Wednesday. He is the analyzer and arbiter, now in a realm where words are unspoken yet. But this passage is due each year in the zodiacal year, and also the passage of the earth-Pluto on Saturday, where Symbol and Element merge into the zodiacal cup.

Finally the Venus-Passage of red Uranus , which was today and olive Mars on Saturday. On the meaning see here, when there was a maxi- dramatic military-political constellation.

So much for today, and all the best for your reader's health. 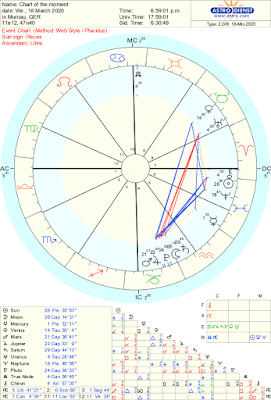