From New Dehli to Washington Self - Expression and Sacrifice - (Part Two) 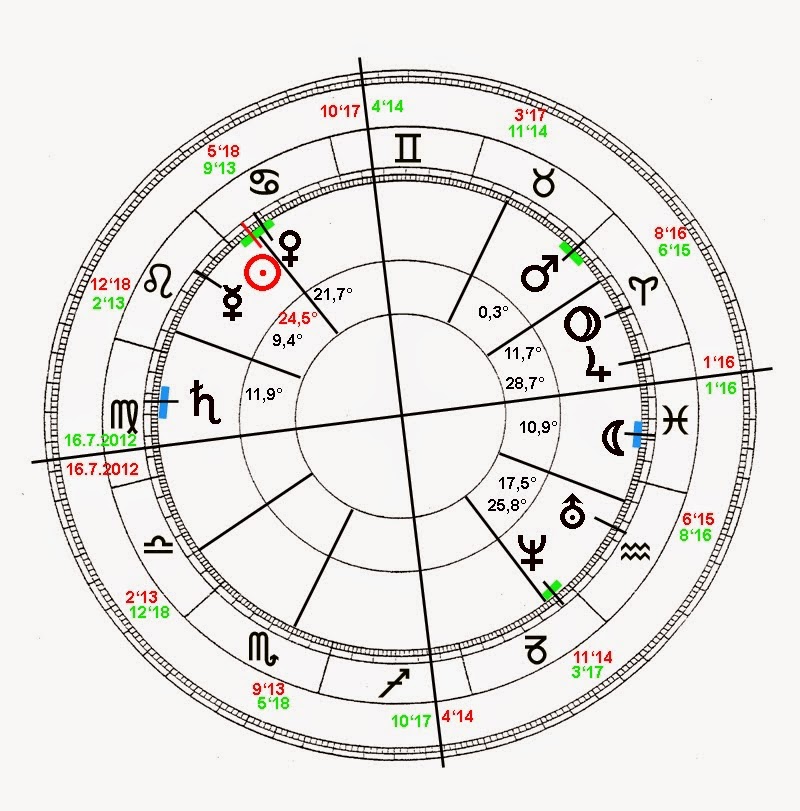 Its Virgo ruling these 7 Years in India.
This civilisation, in its current stage of symbolical  maturity before last, was in a Process analoguously to a divine talking head speaking his divine heart in the last seven months.
In the current seven months there will be a phase of collecting and hunting for a territory or stamping ground in the spirit, which in accordance with Venus in 10th house, meaning - a spiritual encountering  of a kind of "supertribe" with its fatherly clarity basing in a deeply rooted motherimage ... and - conuinction Sun Venus - rules symbolicly as territory = Venus of heart = Sun ruling.

The Virgo  of the lower half finds her "Selbstausdruck" in the fifth house ruled by Capricorn with Neptune and Uranus = resolution + suspension of Capricorn = validity of standarts in the 12th house = again resolution in resonance = opposition with Luna and her world of mucous membranes. Famine now and a sustainability in the future? (Because house 12, 11, 10 are on their way but have not yet arrived in time.)

Further in the east we arrive in the Realm of the Middle" and its metropolis Peking ruled by Venus these 7 years in the unconcious mystery of harmony. 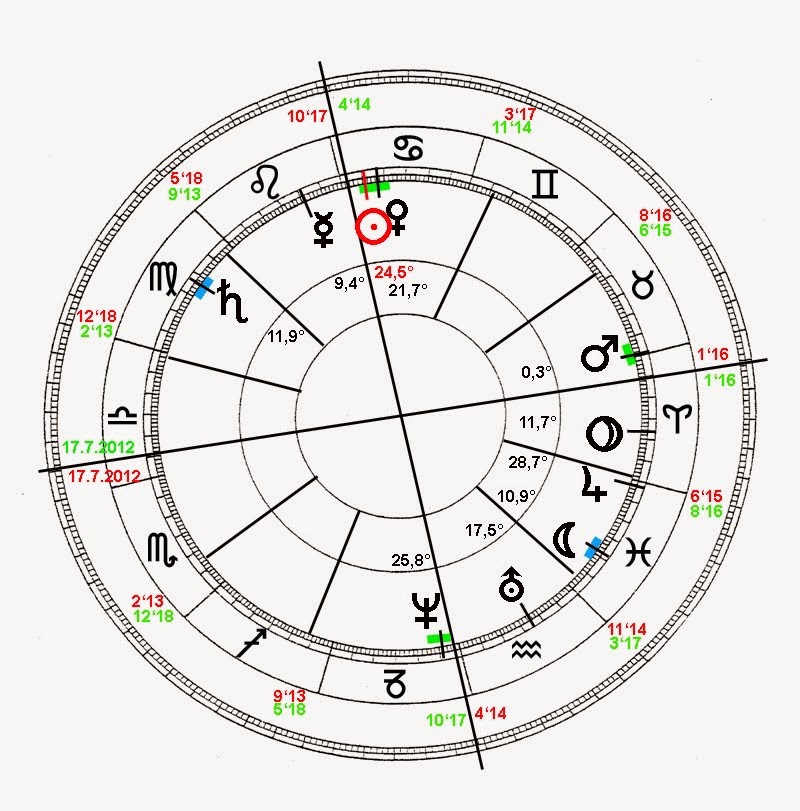 Now, after seven months of Venus/Sun = safety and souvereignty in Cancers lap of elements, House 9 in an encounter with the own "selfexpression" of Moon in house5. It's now a kind of self-cleaning  of souls emotions (house 5) in the neighbouring world (house 3). Its an adding of pure  soul-essence, China will be attributing this seven months to the "soup" and drama of the northern hemisphere.

Encountering for China in these 7 years is the Mars, the bugle or rising, on the stage (h/7) of the hemisphere. This is the meaning of the "full encounter".

The meaning of chinas ASC, Libra, is a kind of thing, which has in it self 2 baskets, homes, plates,sexes. It's a thing, to bring a warrior to complete calm satisfaction. Venus' scale weighing a complementary lover to every single entity.

The Mercury of the Twins who is ruling these 7 months collectively inspired on the throne of 10th house is to present the collective 3 - allways a position faciliating neutral ground for the meeting of the antagonisms of the 1 (half arrow alone) and the 2 (half arrow of  half a circle).

The symbolical "ground" of this 3 = Mercury is Leo = souvereignity of ones "Selbstausdruck".

And further east far behind the worldwaters of the Pacific a country emerges which is ruled far far away from its westcoast in the east in a metropolis called after one of its founders George Washington. 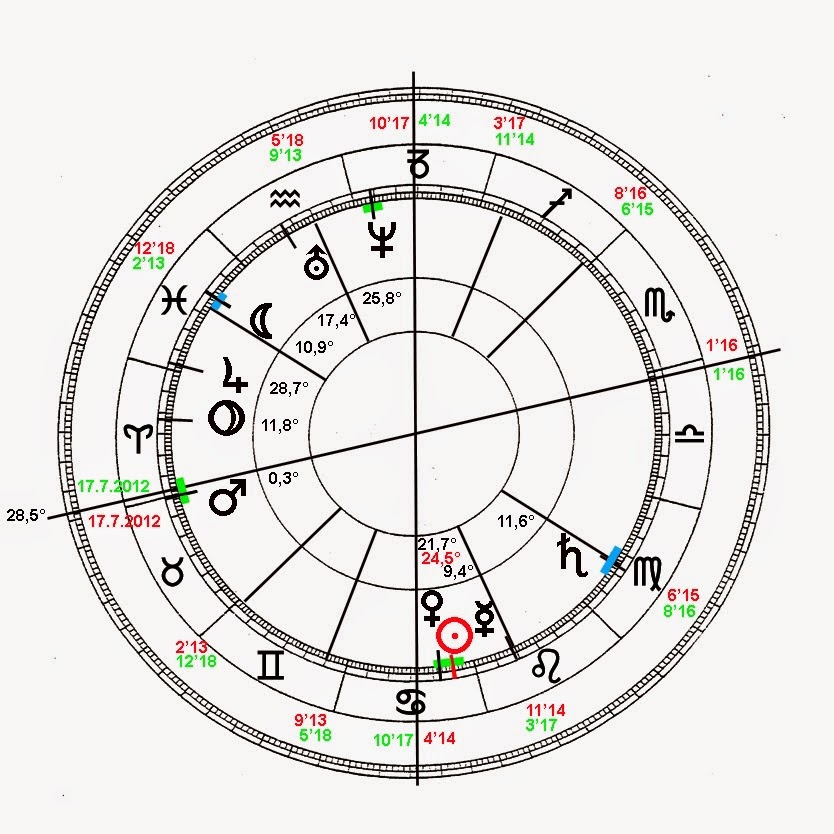 This Place inherits for these 7 years as ASC the burden of the "aggressor", which, blindly as no other god (in Mars  appears  the ruler of birth in blindness (Nr. 1). Many animals are still physical blind while appearing in the house of birth.)
Therefore the last seven months having been ruled by Saturn the ruler of restriction in the cusp of the sixth house, meaning blindness in the opportunity of opportunities giving birth to what it doesn't know and to something that needs an blind opener for the placenta of fate.

On it's way to satisfaction or relaxation (DC in Libra) it now, for the current 14 months, has to stick to the symbolism of Sagittarius meaning to the symbolism of the funnels wide edge, in the zodiak the edge of intuition comprising the whole circle of the world --- and the ruler of this edge, Jupiter is in house 12, meaning: back into a complete resolution and newbirth in the bath of the creator

Looking to the lower half of the chart, its Leo ruling the 5th house with it's expression of ones essence. Saturn at the cusp of the 6th hose is to be dismissed for the 5th, being ruled by the ruler of the 6th. But Sun, as ruler of the 5th comprises the radiation of ones heart and in 4th house it is in expression within the privacy of local or familiary affairs.

Finally this piecemeal compilation descibes 7 months in the "life" of lights, signs and times, or of gods, or psycological, of the interaction of  psychoid  archetypes within current  7 months, spreded over the norther hemisphere of our planet. They do interact, the psychoid archetypes, or gods, either somebody is in a godlike kind concious of them or not. Our specific human privileg and adventure in this creation is to be cronicler, conciously accompanying  them in our astrological net, which reaches back into the thousands of years. This doesn't mean to assume to "understand" this interaction in the first place. The blessings of such accompanying use to come, if and  when one doesn't expect it.

Help needed: I managed to erase the first part of this little essay comprising middle and east Erope and I managed  having not safed it in my blog folder. If anybody has taken a copy of that one I would be happy beyond  imagination to find that lost child again.
Thank You.