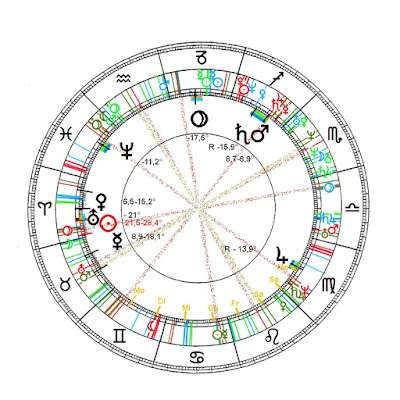 this week now there are for Astrologers delight
two dates with ancestors - cause in our unconscious psyche -
which C.G.Jung all his adult life searched and told of
are remaining - call it vibrations - in the after-life of man
as the three signs and rulers- after -"The End"
Capricorn - Saturn
Aquarius - Uranus
Pisces - Neptune
tell of the beyond of time
the spirit - quarter of the zodiac
Gods and numbers

Jung told about the entity "Selbst" = Self and explains consciousness  as  bright spot in a kind of
dark balloon of unknown dimension surrounding the spot and sometimes as the tiniest  scintilla in us.
Might the bright spot in time  die - the "balloon"  remains being not personal but  collective
created and obtained by the unknown creator maybe like the net and a user - the user dies the net remains - but the dead will be seeing- like St. Paul wrote in a letter 1Kor. 13.12.

So  in this  ancestral spiritual balloon "Self" - who "knows" all secrets of God longing to meet human consciousness - we are before, within and after finite life on earth together with our ancestors in our eon.

The eon however has not one birth-date but four. This according to the four elements - after  sex - the second grade of order. In the  hypothesis of the  old Persian astrologers the four elements, dispersed among the twelve signs, were the deeper ground  for the four types of vibrations or aggregate states.

In the zodiac the sequel is: fire, earth, air, water

Back to this week: waiting for the visit of Mercury are  two virtues of the earth element

Well, now this week a fire-God is to be visited at Taurus 14,1°, which we share with our ancestors since 1603: the "red" Uranus. Simply a paradox, as Uranus, in which element ever,  is a God of easiness and distance to centers as Taurus is a place of heaviness and association. So on Thursday the inheritance of earliness (fire) and origin (Uranus) among us is due, unless someone keeps the opinion, one has to liberate oneself from the tyranny of stars, God etc.. Aquarius sometimes happen to think that way.
So far, Mercury and "red" Uranus on Thursday.

And yet two days later it happens, that Mercury pays one of his visits for this year to the relatives of
of the earth-element: it's their Mars, waiting at 16,9° Taurus for action. So Mercury - of whom is told what is told of the brain: good with the good and bad with the bad - and the earth-dark Mars on Saturday.


But now to the center. Uniting all of us under the sky of the northern hemisphere  in the beginning of the week was the Sun =  heart of each of us -  the star= heart nourishing with light and gravity, from Sunday to Monday in the line of Earth - Sun - Uranus  a resonance-cluster between heart and beyond.
And it was the resonance-bridge between oneself God as center = Sun and Uranus God as borderless periphery around.
The Greek had gr. uranos = heaven.
Now Uranus in Aries  since a number of Years is embracing Sun in this sign of the beginning - so far
now by 21° out of 30 - Uranus travels 7 years each sign.

But Sun will be wasting like a heart another week and a halve day in attacks and under Taurus Sun then will be wasting defensively by investing in walls and roofs and with Sun in the hearts of all bricklayers.

And all that Uranus - Sun stuff, spirit and soul stuff, here and beyond-stuff is in resonance with Pluto the immeasurable beneficial God of waiver weaving bridges with the ancestors of yesterday and  seven hundred years ago bridges  in words  written and being read  like St. Paul said: beyond we will see clearly.

And Sun  = heart  will meet Pluto of the fire element on Thursday at 25,3 Aries since 1603. It's the God of faith in the fire - element - the faithful beginners - with which our unconscious  heart shares the identity on Thursday.


But after Sun left Aries, Venus with her fullness of resources will further be at disposal of Mars together with Uranus. So now to the head of the divine train to Mars the pusher and drawer who seemingly now only moves in mincing steps till Monday when he entirely stops to then start a way back tour (slowly being overtaken by earth) till July back into Scorpio and only after mid-August Mars will be wandering again where he stops this week ...
and by resonance with him the well reconnoited spiritual attack uniting the "vibrations" of father Saturn son Jupiter and child Neptune.


To father and son Carl Jung:


"... the father-imago has also a general meaning as Logos resp. spirit with the quite special character of the fatherlyness.  Famously Logos is in and of itself not necessary fatherly.It can, as we know, son-ly. Is the case  the latter lacks it the fatherly quality. The sonly Logos is the created Logos the fatherly Logos in contrast is a begetting one, a fatherly cherishing and maintaining one. The sonly Logos generally has the character of a heroically harsh confession, challenging the receiver for an equally independent decision. The creating fatherlyness by contrast is introduction, leading, accompanying, education. He doesn't explode like a bomb or a firework , but takes the ignorant or reluctant by the hand and leads him so to speak on a safe way through the inhospitable darkness."

while it's up to the child-God  Neptune to watch without denial.

And all this stuff, for natural human eyes mostly invisible, configurating in the heights outside and depths inside us has become tell-able by the tools maturing in only a few thousand of more than two million years of humanity. This allows us to attend the Gods in the order of their circling heavenly lights mirrored by human flesh  and passion. And by that attention a new way of humanity will become possible - is is what chronicler mundanomaniac believes.