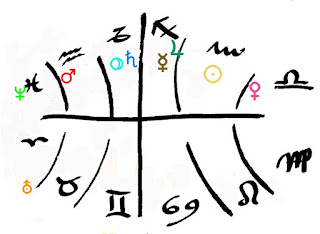 "The heaven-archetype is essentially connected
with the symbolism of the spirit, yes innitially it
seems, as if heaven and spirit were archetyply identical.
This identity is intensified ... by the formation of opposits
within the archetypal symbolism. If  together with heaven
all invisibly from above moving, with the Earth all visibly
from below withstanding being connected, but id est
also is experienced, then for the Earth remains no
positive spirit. And what is  still as 'earth-spirit'
experienced in opposition to the 'air-spirit' is
ostracized by the exponents of the heavenly spirit
as negative. Not accidentally to the middle ages
witches are representatives of a spirit, therefor
their 'flying' as symbolic expression, but their
spiritual master is the devil."
Erich Neumann
originally in German:
Die Bedeutung des Erdarchetypus für die Neuzeit 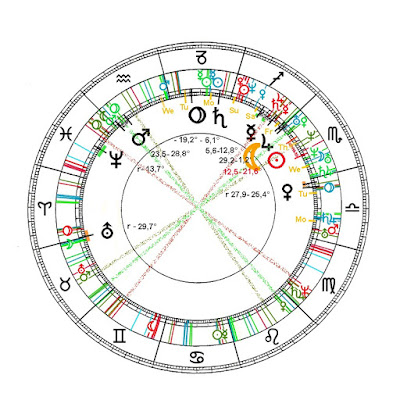 two relocations of our 'gods'

kind of breakout in 'heaven' (spirit)
out of
solidified thinking

without Pluto
the Harmony of the 12 is broken

a magical moment, when in a paradox meeting
Pluto in the depth of
the waters above
freezes the flow of thoughts
being met by brother Mars
with an invisible  ice-storm
above the invisible glacier
of shapes

Uranus was  in Aries since 2010 till Mai 2018, since then till yesterday  in Taurus,
now again back in Aries till March 2019, virtually setting the i-point above the 7 years of rising.

Mercury in ancient Egypt Thot the wriiter
of the judgements at the scale of the gods
today on Wednesday at
8,3°Sagittarius
in connectionm with the light of the highest
authorities of light/fire

father and son of light and fire
since then 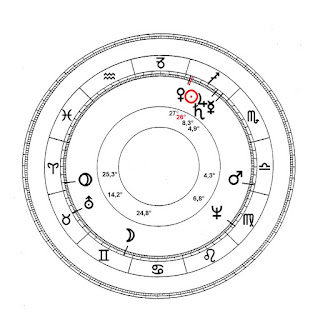 Talking about Mercury is talking about our 'earth-spirit' often called intellect, as his male Twins-version and prudence as the female way of Virgo.

And Carl Jung often notices, that in our current world the intellect has occupied the throne  on which only the heart, only Sun, our cosmic heart,  center with four chambers, has it's legitimate  place.

on Sunday will be
birthday of one of the four elementary Neptunes
18,9° Scorpio olive Neptune of the earth element 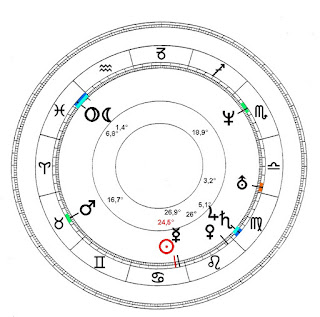 As I wrote last week, the moment when the polling-stations were closed for Washington DC. was 20:00 EST. The chart showed this: 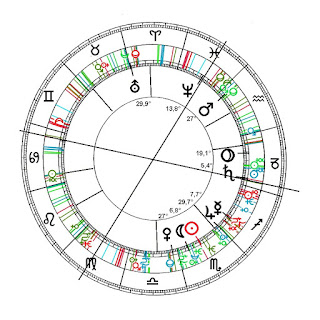 The fact created is Cancer. It's America's well,  welling in the south, anywhere, families coming together, music, the old songs, old dances, good smell in the air, like some barbeque, forget about the world, do, what has to be done, in peace with neighbors and animals.

Cancer is a sign, evocating welling water, symbol of the inner processes as roots of the soul.

And the blue dream? Are the global interests of the blue party in the current game  carried by the vote? The Blues are the 20th centuries successors of the dominant Anglo 'Robber Barons' of the sea, robbing things, souls, people, lands and cultures . They are the outgoing gamer- families in alignment with their world-wide Jewish bag-keepers, still able to pay any prize to any carrier of their liberalism in the veins of all still western hypnotized people, able by their outgoing money- out- of- thin- air- machine.

The MC (medium coeli = midheaven) tells, what is just coming into time: it's Neptune in Pisces.
Hence the utter soft chaos of meaning,  full of germs of meaning of a new time.

The DC (descendent coeli = sunset = meeting the opposit-partner) is Saturn in Capricorn.
A kind of meeting 'Sparta'. By any chance the kingdom of the north?
Capricorn is state, in opposition to Family. Capricorn marks the sufficient minimum each one has an entitlement to. What will the Cancer, the families of America, offer this Capricorn. Certainly the Reds will do easier with that than the Blue.

And the Sun and Moon, the latter the lord of the election (= Cancer), both are in Scorpio, unconsciously attracted by the ancestors and the coming generations of fellow countrymen.

and Moon this week
the night-light of feeling 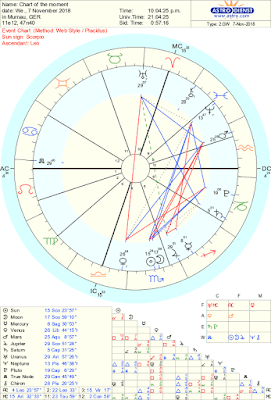