Ordered to the Heart of Anthropos this Week 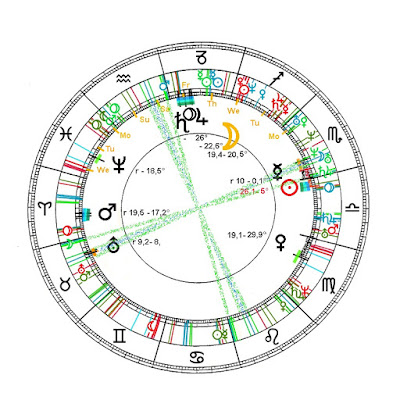 10. 19 - 28. 2020,  0:00 UTC
and under the northern Kingsconjunctions
of the four colors and elements
Fire, Earth, Air  and Water  of the years
1603, 1802, 1980 and 1305
under the Northern Zodiac
(click to enlarge)
JUNG
"Spiegler" [Reflector] is a dominant archetype. the producer
of the mirror image, the point through which two sides are
inverted, a minimal dimension. This is where the psychologist
comes into the dream as a (symmetrical) representative of the
psychic side; in other words, the unconscious here is pointing
out a psychic aspect of the smallest  dimension, probably the
self, which in the psychic sphere represents the largest
dimension.
In the world of the mu-meson - i.e. that of the smallest dimension
of all - the concept of reflection seems to be coming to an end,
for now one is dealing with the "Spiegler" [Reflector] himself
- namely, with the psychoid archetype, where "psychic"  and
"material" are no longer viable as attributes, or where the
category of opposites  becomes obsolete and every occurrence
can only be asymmetrical; the reason for this  is, that an
occurrence can only be the one or the other when it proceeds
from an indistinguishable One.The mu-meson is, of course,
just an approximation of the smallest One.
The UFO legend comes to the conclusion that the "Self" is the
"Reflector". The symbolism depicts it on the one hand as a
mathematical point and unit and on the other hand, through
the circle, as  universality (i.e. infinite plurality), personified
as Anthropos, God and mankind (Hiranyagarbha = conglometate
soul), eternal and transient, being and nonbeing, disappearing
and rising again."
ATOM AND ARCHETYPE, The PAULI - JUNG Letters, 1932 - 1958, 77. 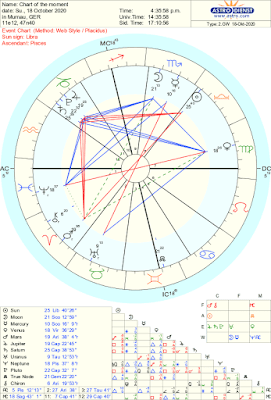 the moment of random choice of this quote among hundreds of possible ones
The moment belongs to the element of water and the sign of Pisces, which never close their eyes, symbolizing the unconscious, which also never closes it's 'eyes', and the encounter of the unconscious are the open eyes of the vigilance of the earth-element in the shape of Virgo,  as the last Kingsconjunction of Saturn +Jupiter in the element earth happened at 5,1° Virgo.  With Pisces the unconsciousness appears 'personified' (by mundo) the more so as the Pisces ruling Neptune appears  in the first house [= appearance].
A level deeper, on the quaternary level of the elements this moment belongs to both earth and fire: Hence the moment belongs to the encounter of the unconscious with the highest consciousness of the element earth. Actuality
cares for itself. "The world is guided by letting nature take its course." Lao Tse.
The cognition of a week of an Earth-Hemisphere relies on man, following as conscious 'reflector' with respect and interest the lights and planets in the zodiac. In the zodiacal year of the Earth the 12 basic qualities appear  as reflectors of Earth's "Self" in the daily creation, able to take on each shape of their sign in time.
Here now the  43. Week 2020
Northern Hemisphere
Mars
the young energy-pack
or explosion -"Self"
of burning hunger
and its squares
as place where 'the new'
starts
just 100% in square with Jupiter
hence new + providence
by double fire
double beginning of
spirit
Jupiter
and being
Mars
while Jupiter is resonating with
brother Pluto
and father
Saturn
hence it's time of compatibility
of providence + heroism + measure
with
fire in retreat
and in late Libra
Sun
adds heart to this rare
and precious
heavenly vehicle
of 5 archetypes
in Anthropos
while
Venus
roots- and balance-"Self"
in us
steering in Virgo
has to unite the opposites of
prudence of Virgo
with
conceding and let happen
of Pisces
Something what  in randomness of choice and highest consciousness in quote appeared above.
***
Mercury
the sense- and sex-"Self"
measuring the widths and depths
in matter and soul
still in Scorpio in retreat
this week
(beginning with Monday)
walking the first 10 grades
and visiting  4 times "Selfs" of 2 Elements
3 of water-element of 1305
1 of air-element of 1980
the former deals with feeling
the latter with thinking
gauging and talking
in Scorpio
while overcoming the Ego
with  Neptune of feeling
with Moon of thinking
with Uranus of feeling
with Saturn/Neptune of feeling
and all in union of opposites
with Uranus in Taurus
offering the spirit of  universe
to the social herd
***
Sun
finally
heart
in the balance
Libra
in slowly fading coincidence
with
the rare and precious
Saturn Pluto Jupiter conjunction
(see above)
the square coincidence
with Saturn's  shears of the
Gardener in God's Garden
The "Self" of the heart
is likewise
point like the individual
and circle like the world
Thursday night
Sun leaves
Libra
enters Scorpio
and likewise on Friday
visites
the highest (coolest) raise
of the water-element
in Scorpio
at 0,8° Scorpio
Saturn + Jupiter
since 25. 12. 1305
of the element water
in the shape of crystals
of glaciers and firn
of the soul
in the realm of cyclical order 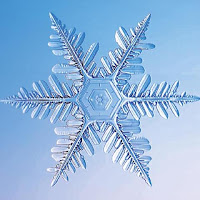 hence
ordered to the heart of
Anthropos
this week  on the Northern Hemisphere is
to encounter (Libra) and then to marry (Scorpio)
the consciousness (Libra)
of meaning (Pisces)
mirrored
in the awareness (Virgo)
of being
Murnau, 10. 21. 2020, UTC: 15:38
Documentation: 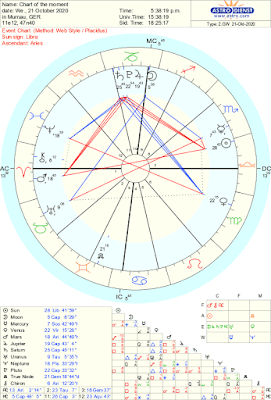