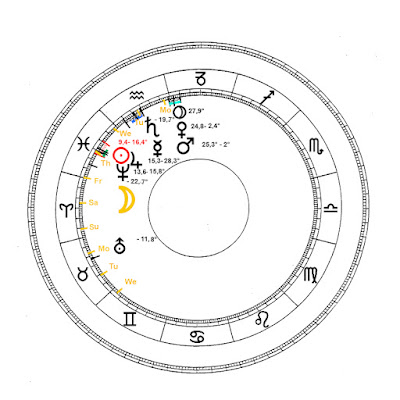 Money goes on the expense

In anonymous clearness and humility of the craftsman, the  Joseph-track of God permeates through the time.

In 1980 I was done politicly with Marx: neither left nor right gives home, only the gentle stream between the extremes  does that.

But my deep missthrust against the imperial demeanor of the West remained unscathed, when, 42 years ago, i entered: symbol, zodiac, spirit. And the chinese I Ging  spirit sees  heaven as the universal fix.

Back to the war. Russia has ignited the bomb, which blowed up the dynamite of hypocrisy and hystery into the air of collective ignorance and mendacity.

Kiew had declared on the "Sicherheitskonferenz' in Munich: Yes, to the Ukrainan Atomic Weapon." Their handlers in Wash. DC knew: this would bring the trigger, which deadserious Russia was  determined to avoid.

Putin started thereupon at 2.24, 3:40 the humanitarian war to avoid the III. worldwar, like he did with the the 'annexiation' of the Crimea, forestalling the secure bloodbath to come. Putin is Libra - ever the spirit of balance.

Sidebar: Hitler had ASC Libra, hence he was unconsciously (ASC!) super sensible for imbalanceshe hence  was to be the most pissed- on German, his rage was treue  teutonical ragewas the rage of the blue-eyed beast, against the allied rodents ruling the seas.

The greatness of the great is their timing,, their being ready in time.

The Russian policy has become grown up since the fatefull June 22. 1941.

Or else?`Nazi-Ukraine with nukes as detonator with direct line to Washington's eternal goal: to occupy Russia, split it, suck it dry,: the last colonial realm on Earth for dracula.

By the Ukranian Nazi, obviously the everyday-Nazi of the West, in America  called 'Bully',  the German is not confronted, since the media, totalitarian 'gleichgeschaltet' (forced into line) since 2014, looks constantly the other way. What eveyone knows from the schoolyard: the enemy of man in childs shoes, tantalizing the weaker child ... against him, in Hollywood the avenger arises, on the schoolyard: nobody. "Wir haben nichts gewusst" (We didn't know anything),   the usual excuse of the usual Germans after the defeat,  fresh as anytime, while the East-Ukrainian Republics were shalled every day for 8 years. 13.000 deaths of the 'anti-terroristic-war' against the 'Separatists'.

The victim of the nazi-virus, a human-mutation, tantalizes man with perverted joy, For that he needs no party membership card only his pack of Hyenas, and his obedient loudspeakers.

Nazi is, who behaves like one, may he be called Hitler or Smith or Mrs. Goldman. He leads to the 'Death-mills' with which the Germans, Japanese, Americans, Spaniards, Belgians, Croatians ...,  and last not least 'Britannia ruling on the waves' have excelt

hated by all of them

which had it's own camps

and enemies of humans within

the paradoxx above all that

never is God with the follower

where your spark is waiting

in the karmic life 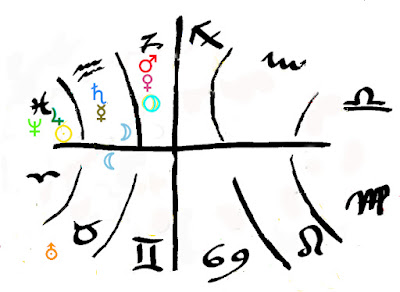 Middle of this 9. Week, 2022
in
above
below
us
(northern hemisphere)
The constellation tells us
that the war
Mars/Venus/Pluto
is lead by Capricorn
vicariously for the right order
of the collective
The marble order of Saturn
who is in the 'think-heaven of Aquarius
preparing the coming times.

Lets have a look at the sky of the zodiacal man this week:

always one may understand the conjunction as a wave in the time, i.e. surging - apex -decongestant. Hence this week appearing as the decisive one of  = all zodiacal power minus Uranus mirrored by Uranus in the herd

Whenever the critical moment of  triggering before  or at the apex is to come, is not to be predicted,.

the immortal truth of God

only to be found in the child

lies in  Pisces-spirit of innocence

of hunger and impatience

like they both mirror in the horoscope of any

three part-personalities in each of us

in the ire of Mars

the security and  preparedness of Venus

and the waiver of the muslim sacrificers

calling for the cross

and the children of humanity's

whose witnesses we are

war against the war

war against the pernicious

which in the West

in the projection of them own evil

It's again the great Uranus-mankind-trial, like recently 1935 - 1942. Uranus, 'Man-God',  moves 84 years in the zodiac to complete one cirle, 7 years of it in Taurus, 2018 - 2026. The madness rages in the herd. How that? The Greek culture had the idea of this God seen in Dionysos, the prevailer above the human-necessary cathartic rapture and divine ecstasy, whom in canival, fasching, etc. the follower-festival is celebrated and - unconsciously - in wars.

Then this week: heaven of future, i.e. in  Aquarius, in thoughts will be codified historicly:

in Aquarius coming to origin

And? Has the West a historical constitution ready?

The east has the Putin/XI-manifest of February 4.2022 readyness for mankind, reaching until sacrifice. The West has sanctions and nazis, thrown as spanners into the wheelwork of fate, which doing like,  one should have no doubt, God hates.

Does one know "it"? The Nazi-Virus?

No! Again and again forgotten, at last since 80 years, while now the Russians again under sacrifices pull for mankind the chestnuts out of the fire, or painfully disinfecting it against the jewish-nazi-virus which currently infects the West under the devise: The Russians are no humans but Untermenschen,  Separatists and Snow-Niggers, liking their Dictators.

We all, attending  heaven,  are asked.

My answer , I hope,  coming weekend.