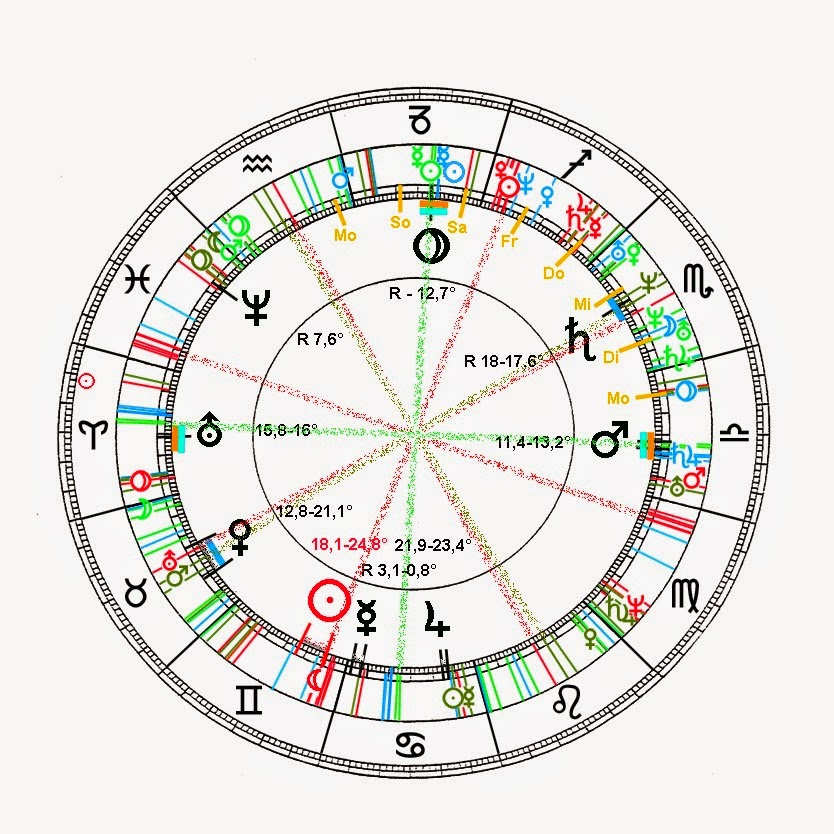 Heavenly Waterlevels
from Monday to Monday
(the most important)
9. 6 . 2014
and thereupon based on
Mundanomaniacs

If there is a week - then it is this one ...
in which the resonance of  Pluto to Mars and of Mars to Pluto arrives at its perfect intersection reaching its maximum
with  Pluto and Mars the  potencies of „plan“ und „start”
ad together
a version of that would be: „Start of operation“
nearby at the same time
resonance of Uranus god of man in young  ire
yet still a bit apart
before the outbreak in two weeks

in this roots world
- bread and circuses -
Venus unites on magical grades of the zodiac
with the red man god of fire Uranus
on 14,1 ° Taurus
and with the earth dark first arrow of the earth
in the shape of Mars on 16,9° Taurus

and
Jupiters target-aimed circles approaching the heart of the earth on 24,6° in Cancer
birthday of all from 17. July - including Angela Merkel -
Earth Sun = sovereignty of the collected gravitas
for unification beginning next week

and Sun finally – heart of the inquirer in sovereignty -  Daystar of ego on the roads of Mercury in the inner worlds
approaching the meeting with world moon of the fire element on 24,8° Twins at beginning of the week
where a being at home is given
for the fire in the spaciousness

(Please have mercy with my attempt to do my weekly analysis in English as well as I can do it. Forgive me my mistakes as my mother language is German.)