A Week Without Spirit - but with Passion 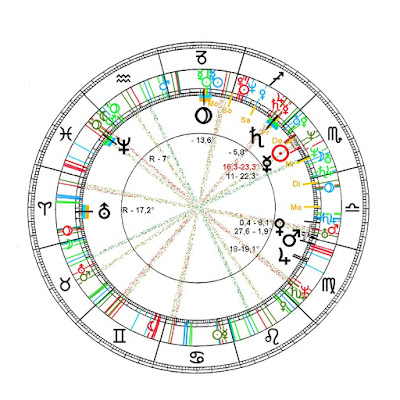 e.g. fire
in Aries and Sagittarius fire rules and emanates
in Aries elementary heat
in Sagittarius spiritual fire
for 7 Years now  since 2010
in Aries in the prey of  predator
Uranus resides
human spirit below and above blind ire
the attack of the unexpected
and now for another 2 years
paternal  spirit of Saturn
on the conciliatory radiating ground
of Sagittarius

those two lights of spirit this week are  not connected with
every day's affairs
e.g. earth
in Virgo the realm of nourishment in Capricorn
the supreme solidity of earth is inhabited
in Virgos consciousness Jupiter rules in the perception of the
fair share to every type of being

e.g. water
also water harbors a heavenly soloist:
in Pisces alone lingers solution
in other words in Gods lap
like the sea in the lap of the depth
and salvaged therein  out of time in the earliest
"before -time"
invisible like gas
Neptune child of the universe
scintilla of love in the unconscious of every creature

also this god of unconscious hikes as soloist through heaven
this week
but Neptune and Saturn on the one hand
and Pluto and Uranus on the other are in increasing condition
of shared resonance ...


the remnants are Sun and Mercury on  one

and Mars and Venus on the other stage

Whereby "stage" is the true term for Libra and the more inaccurate for Scorpio, because where Sun and Mercury are hiking now better would be the phrased as "behind the stage" with the costumes.

Its the hearts warmth of the waver of appearance on behalf of the Sun and of  space and utilization
for oneself on behalf of Mercury which are in Scorpio still in the practice for the appearance on the stage of presence in the sign of Libra.
(Wolfgang Döbereiner again and again teached that while in Scorpio a content is not yet in presence and consciousness).

There at the Scale  "Libra" in the awareness of the harmonic proportions there is mirroring from beneath out of Virgo the consciousness of conditions. And above this mirror-point (30° Virgo = 0° Libra) Mars and Venus are mirroring this week until Mars transfers out of Virgo onto the other side of the mirror
into Libra on Thursday.
But Venus  with her resources hikes through the "Grandola-constellation" in which the bonfire of human brotherhood lights up.

And Sun and Mercury apart from this both visit Neptune the child of the earth element
at it's place at 19° Scorpio since 1802 carrying the distant future of the earth
so: Sun on Wednesday and Mercury on Friday with the earth-coloured Neptune.

till Tuesday morning in the similes of harmonies

till Thursday afternoon in the practices of Scorpio

subsequently till Saturday night in the incursions of perception

on Sunday finally while the visit of paternal spirit