Rare Encounters and Winged Heart and Brain of the Collective Man 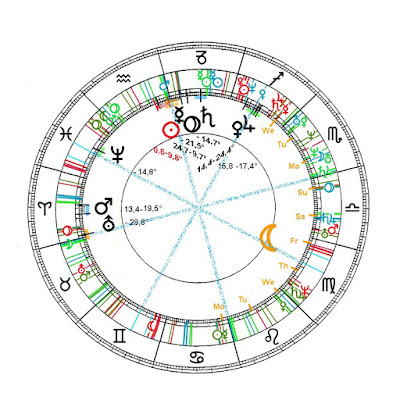 " All what is unknown and void is filled by
psychological projection  as if the soul-background
of the beholder mirrors in the dark. What he sees
in the matter and means to recognize, are  firstly
his own unconscious givens, which he is projecting
in it, that is:  properties and  possibilities of meaning,
apparently belonging to it, are confronting him, out
of the matter, whose psychic nature is completely
unconscious to him."

Mercurius in no way is the christian devil, who much
more represents a "demonization" of a lucifer, just
a Mercurius. This one is a shadowy  indicated primordial
form of a bringer to light, who never is the light himself,
but a phosphoros, the lumen naturae, the light of the Moon
and the stars, being outshined by the new morning light."

" To become foolish is no art, but to extract the
wisdom out of the foolishness, might be the entire
art. Foolishness is the mother of the  wise, but never
the prudence.

Mercury is with Jung the bringer of light (phosphoros) of the good and the bad, neutral himself like Sun, shining on the just like on the unjust, but not as creator but adversary, he goes for the all-carrying lower part of the light of the zodiac. And Mercury carries in the zodiac the light of air -element of the Twins and of earth - element of Virgo. That is earthly thinking and emotional measurement in the zodiac.

And Mercury this week

:And a birthday of one of the four elements of our aeon is awaiting Mercury with air-Mars at 0,8° Aquarius.

entrance for the winged
beginners

What a week each year
providence,
roots and balance
of love
provided
good for
three wise encounters

Venus and Jupiter meet each year one day with a 'halo of resonance' of about 7° grades. They met yesterday at spot, hence their resonance slowly fading,  swings all along this week. Two weeks each year in this combination, but each year Venus meets with Jupiter in a consecutively following sign. So those next two weeks in Sagittarius will be again in 2031.

And within this mixture  falls the blue Venus - birthday of Venus of the air-element at 17° Sagittarius.
Embodied by Venus I see the female genius of rooting and mating, aka the situation of Taurus the passive and Libra the active Venus.

What does a 'blue' = thinking collectoress in the situation of 'suddenly all fixed rightly' or Sagittarius. I think she will behold and save the conditions of the  given beauty of   wise concinnity.

since tomorrow Thursday
together with brainy
Mercury

All this in the synchronicity of the week
unconscous
unconceivable
but in parts presentational to our consciousness.
because visible in the angular weave
of a planet-encircled Star
being our home

and the pot for the mixture
of the activated archetypes, gods,
planetary resonances
is since ancient conception Moon
circling with her belt
the "world below the Moon"

and how does she it
how does Moon it?
all these weekly adds to the collective fate?
answer:
in the feminine way
or simile to
'water'
surrender to the foreordination
of  time 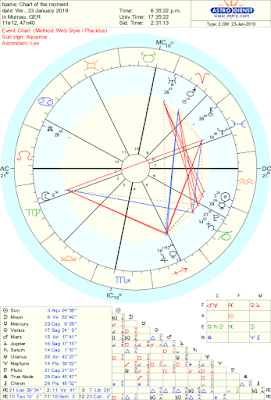