From Abundance to Frugality 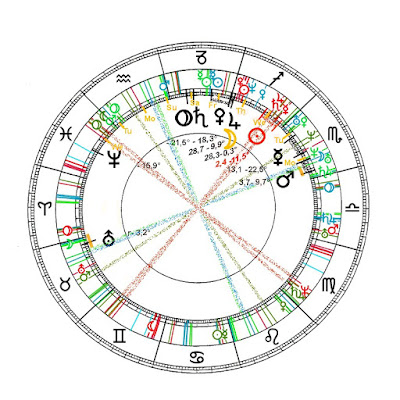 
The symbol is a living body, corpus et anima; hence
the “child” is such an apt formula for the symbol.
The uniqueness of the psyche can never enter wholly
into reality; it can only be realized approximately,
though it still remains the absolute basis of all
consciousness.
The deeper “layers” of the psyche lose their individual
uniqueness as they retreat farther and farther into darkness.
“Lower down,” that is to say as they approach the
autonomous functional systems, they become increasingly
collective until they are universalized and extinguished
in the body’s materiality, i.e., in chemical substances.
The body’s carbon is simply carbon. Hence “at bottom”
the psyche is simply “world.”
Carl Jung, CW 9/1, Page 291.

In this chronicle the complete unconscious poesis of us as Agents of and in  Sun's family of Planets a third class of actor , not Star, not Planet, much smaller, but so near to her planet Moon in who's circles Earth's  every- nights roll

... while yesterday Wednesday the light of the night dissipated by so much light of day of
red Mercury of  1603
quasi our collective early Mercury intelligence working underneath our
conscious perception
but by knowing the 12 symbols
one can learn to follow their actions
deep within us
and in their mirror
above us

Sun and red Saturn/Jupiter of fire

Let them do their rhythms and dances like they did before you and will do after your journey here came to its end.  Let them dance and adapt to the symbols, hence re-learn to dance the heavenly symbol-dance. Your deeper soul knows it.

So now  what more is on stage?

the same goes to Mars
in his pushing reverence-dance
last weekend ...
shaken by resonance from Uranus
of opposite Taurus


now Mars
our collective spark within
approaching a couple of days
of  strong symbols in the realm of
the four elements
beginning Saturday:

green Uranus of the
water-element
at 7,1° Scorpio

blue Moon of the air-element
at 8,8° Scorpio

green Neptune of the
water-element at 10,5° Scorpio

Lots of moments of conscious perception will help, to learn to  un-code the codes of solar man's unifying  path on earth.


while this week's  Jupiter follows Venus into
Saturn's Capricorn
for the two of them and their realms
a step from abundance to
frugality
for Venus' Taurus and Libra for 3 December-weeks
for Jupiter's  Sagittarius till Dec. 2020 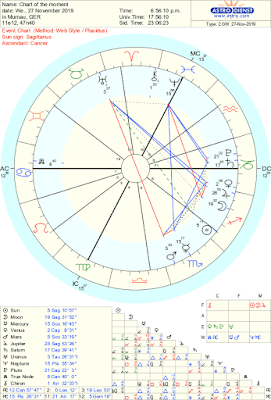