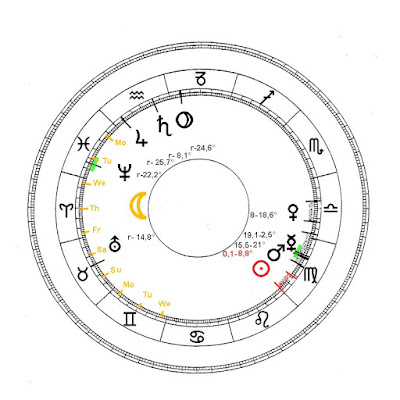 Time
"The word for time, che, means rather a situation of time,
which is favorable for acting. While space and time together
form a whole of likewise determined and determining
conditions, one imagines it as a concrete [...] established
whole, quasi a batch coinciding events. What "bundles" such
is called "chin" -  duration: bygone and contemporary times,
the morning and the evening unite, to generate "chin" - duration."
M. L. von FRANZ, Zeit, p. 7
"As long as the things are still  embryonic, they are outside of the
time and then still  can be  swayed by man;  only when they have
entered the length of time, they become invariable facts."
ibid.
"Time expresses itself in form. Id est, each form is  a statement
of fate."
Wolfgang DÖBEREINER
In my perception 'chin' is the zodiac.
It is so characteristic  for our time, that time is studied so rarely; each shit before 10.000 years is more important, than time as a 'statement of fate'.
This is so much extreme, like the fact, that in the 'astromundane diary', despite all the treasures which this chronicle has to unpack,  regularly studying readers, I don't know nearly just to count at a dozen. But "studying" the times is to be following the times consciously.
In the ten years of the  existence of this blog it got about 74.000 hits. What a God-given silence. -
This silence is not to bemoan, I think, but assures my expectation, that the release off  the contemporary condition will emerge accurately therefrom, where the actual zeitgeist assumes nothing.

"Reason seeks the solution always on the reasonable, consequent, logical way, with which it is right in all median states and problems, but in the greatest and most decisive questions it's not good enough. It is incapable, to create the image, the symbol,; the symbol is irrational. When the rational way has become an impasse - what it usually is to become after some time -, then the solution comes from a side, of which one doesn't expect it. ("Whatever good can come from Nezareth?") The metaphysical law is for instance the basis of the messianic prophecies. These prophecies themselves are projections of the unconscious, anticipating the events to come."

It is the reading of the signs of time, which become possible by the zodiac as measure of time.

The Border between pre-time and time in astrology is the MC = middle of heaven (medium coeli), the 12:00-position of the Sun at noon in the zodiac. The ridge of the heaven separates the time from pre-time. On the right = time, on the left = pre-time. 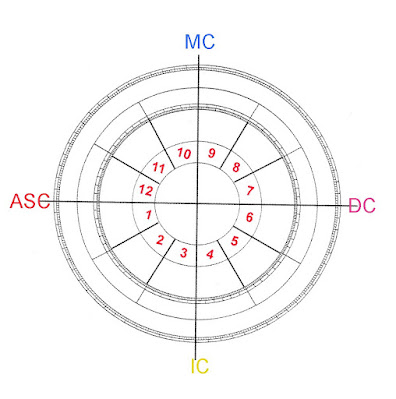 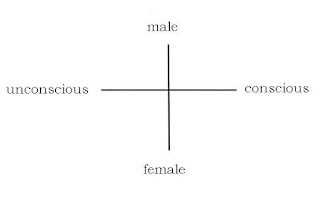 Zodiac, 'immobilized',
each day right-turning
with the Sun
above the northern hemisphere
left-turning above the southern sky- zodiac hiking left-turning through the houses of the day, beginning at the right end - since formation of the world. 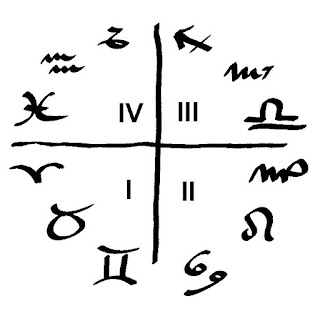 How time presents itself on the Earth,   child itself hiking around  father Sun and his children, while rotating in 24 hours one time around itself,
in each daily
'radar'
a 1°- take-
stripe
time on the
half- globe
only the houses stand still
which the 'gods'
swifter of slower
always in the same time
move through their
common 12
worlds/signs
each day and
year
out of us and within
us
spirit
similar to encompassing
clouds of fate
above the horizon of man
hiking and appearing
in six mirrors
projected
on the Earth's six days
since creation
zodiac
key
of creation 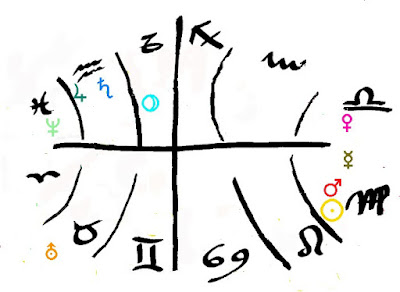 on the six'th day
the creation of the
woman
in the sign of
Virgo
34. Week 2021
look at her and behold
Venus
on the evening-sky
the divine wish
in the woman
to be mounted
in the evening
in the sign of the
open gate
in the time-wall 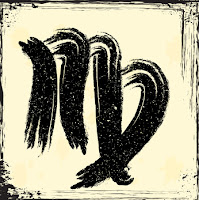 mirrored by  watching
Virgo
while
ire and temerity
Mars and Sun
bundled by
pathfinder
Mercury
get into the
yearly union of the opposites
of vigilance and
innocence
heaven and soul
Virgo and Pisces
by Mercury and Neptune
Mercury as ruler of
Twins
always has to mirror Capricorn
the word
as ruler of
Virgo
always has to mirror
Libra
the image
and currently the
Venus in Libra
mirrored by
Mars and Sun
the spark and the shine
is begetting them
to create beauty in essentials
in the management if Virgo's
perception
prey
awareness
and the floating shadow-world
of our interior
moving with Moon
today Wednesday entered
the fire-world of Aries
of blood
acerbity and
rebirth
since Friday then till Sunday
afternoon
Moon in the magic of Venus
as mother of the herds and tribes
the new week the starting
Moon
in the light/shadow-world
of Twins
So much about the dial of the zodiac. Now in the zodiacal-'watch' there are configured certain wake-signs. These are done by the Kingsconjunctions of the largest sons of the Sun, Jupiter and Saturn - which are meeting regularly each 20 years consequently in the signs of the same element, and after about 200 years move into the signs of the following element in the zodiac, establishing a Kingsconjunction, providing the character of the element for the next about 800 years.
This week now the heart is moved by one earth- and two fire-events: 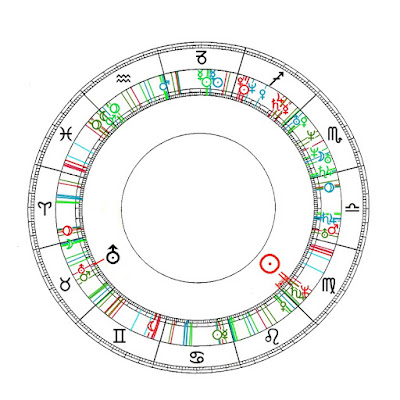 Kingsconjunctions 34. Week 2021
on Saturday
the Kingsconjunction of 1802
with Saturn and Jupiter
at 5,1° Virgo
on Sunday
at 6,8° Virgo
the Kingsconjunction in fire-element
of 1603
the red Neptune of fire
both in conjunction united
still the next 500 years
I don't want to anticipate reading
only so much:
in comical sense it's father
Saturn
and son
Jupiter
which
like Abu Ma'shar teached
rule
' Dynasties und Religions'
beyond times
and as well
further invisible
because of
budding in the unconscious
spirit of the herd
(second mirror)
yet before time
Uranus
at red Uranus of fire of 1603
implanting
roots of time-awareness
into the virgin
Taurus-earth
of herds- and tribe- kinship
which
Venus
the peasant-goddess
carries
by endowing
common fruit
Murnau, 8. 25. 2021, UTC: 16:25 Documentation: