Age of Superman - Declining in the Light of the Day 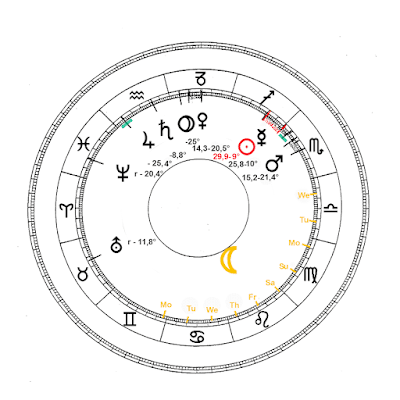 Make your screen as small
as necessary.
But clear it up.
The cleanser is the zodiac
In the islamic gnosticism they say, that in the  ages of the
angels the angel Harus originated. This took the spirits of
the planets and of the zodiacal signs of the powers of the
heaven, 360  and the Earth altogether and created thereof
man Adamus following the form of the highest heaven
(hence round). He was, like Harus huge. Harus corresponds
to the anv andropus (upper man). This   ides shows
distinctly  Sabaean influence."
REITZENSTEIN and SCHAEDER,Studien
zum antiken Synkretismus, p.114)
" It is now a psychological rule, that an archetypus, which
has lost it's mataphysical hypostasis, becomes identical with
the individual consciousness and swayes and  modifies . And
as an archetypus always owns a certain numinosity, so this
integration of the latter causes as a rule an identification of the
subject. It answers therefore just like  the psychological
expectation, when GOETHE denotes his Faust as "Übermensch"
(Superman). This type stretches most recently via NIETZSCHE
far into the political psychology, and proves by this his incarnation
in man with all the consequences, which one can expect by such a
takeover of power."
C.G.JUNG,  Coll. W. 11, § 472
"The contend of the collective unconscious, the archetypes,
in question with psychological  mass phenomena, are always
bipolar, i.e. they have a positive and a negative side."
C.G.JUNG, Coll. W. 10, § 461
"The true leaders of mankind are always those, which
reflect on themselves and  at least reduce the heavy weight
of the mass by their own weight, by  consciously  hold aloof
from the blind nomologicallity of the affected mass.
ibid. Coll.W. § 462
"But what is the resolution?
It is always something ancient an precisely because of this
something new, when something long since passed away,
comes back again in a changed world, it is new.
To give birth to the ancient in a new time is creation.
This is the creation of the new, and that redeems me.
Savation is the resolution of  the task.
The task is to give birth of the old in a new time.
The  soul of humanity is like the great wheel of the zodiac
that rolls along the way.
Everything that comes up in a constant movement fro below
to the heights was already there.
There is no part of the wheel that does not come around again.
Hence everything that has been streams upward there, and what
has been will be again.
For these are all things which are the inborn properties
of the human nature.
It belongs to the essence of the forward movement that
what was returns.
Only the ignorant can marvel at this.
Yet the meaning does not lie in the eternal  recurrence of the same,
but in the manner of it's recurring creation at any given time."
C.G.JUNG, The Red Book, p. 311
insofar the astromundane diary is a constant attempt, to at least half-consciously attend the old to be new- created,
and to forgett it and to find it sometimes anew in life
doing  this in the position of one own prong, in my case as a moment of Cancer in  individually appearance by ascendance. So  this mundomaniac observes the wheel in the high position of his Sun and the low position of his ascendant. And Mercury following Sun has to speak Sun's heart, in the fourth quadrant speaking for
all of us
in the collective depth
of the four
elements
under  the  monthly signs
and the element earth
entices
water
into being  the bed of life
for the stream of
fertility
communication
intake and
refreshment
in the middle between
the two banks
of extremes
of getting and giving
carrying life in river's images
of it's ships
dreams
and fishes
47. Week 2021
Mars the scream
of blood and lava
outburst of the elements
fire
creating new land of soul
out of the unexpected
for years and
millions of years
still in Scorpio
matrimonio
Mars raping
further
by burglaries
what is due
over the year
due to
renunciation
to keep balance
in Anthropos
against
and with
Taurus
Leo
Aquarius
**
Venus
securing
underway in the high halls of
Capricorn
determinating the fundaments
of the non-temporal
fixity
like already Pluto
lord of waiver and renunciation
serves to
guarding the original form
of 12
since 13 years
in Capricorn
now together with Venus
by
love as matrimonium
beyond time
***
here
Saturn discerns in Aquarius
the outlines
of the coming
of the original order
after the fall
of the prevailing
narratives
like balls
rolling
out of the collective dream
like spiritual foxes
hoovering into
and over the self
of everone's dream
reeling and rolling
like time-balls
of the planets
in the ball bearing
house
of the Sun-wheel
whose axis
on Monday moved into Sagittarius
****
Mercury
in Sun's ball bearing
axis
following today
from the wheel of
renunciation
Scorpio
into Sagittarius' round
of joint
with Sun heart
with Mercury
language reason and calculus
now in the fiery
bright spirit
of reconciling
in the original symbols
of joining
the eternal shapes
on the level of spirit
above  soul
and elements
*****
and under his
Jupiter-prong
Mercury
joins
Jupiter and Saturn
father and son
attending the outlines of
new coming times
shaped
by Aquarius'
lord
Uranus
in Aquarius' earthly mirror
invisibly
as Saturn's son and now ruler of
Sun and Mercury
and in his earthly mirror
in Taurus
they
Saturn and Jupiter
find their origin
in their heavenly ruler's
'original jump'
Uranus
in the communities
on Earth
on the northern hemisphere
and it's
six mirrors of Anthropos
this week
****** 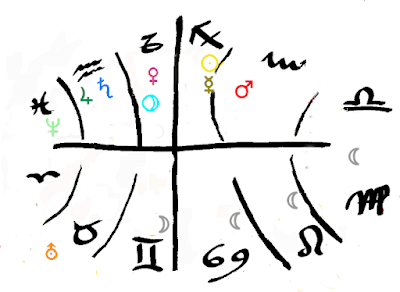 47. week 2021
second mirror
father and Son
Saturn and Jupiter
in the house of Uranus
mirored by
Uranus'
origin down below
CLOUDS OF CLEARNESS
in the heads of
Venus
now  still
standing
in the general of
Capricorn
*******
And here eventually the week in it's four-colored 'socket-days' of the four elements which result from the four Kingsconjunctions of Saturn and Jupiter in the signs of the four elements: 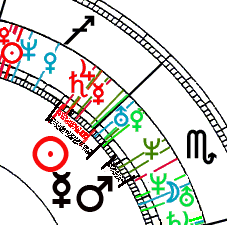 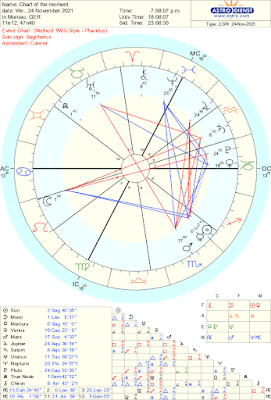