The great battle, the end of which on 2.2.1943 prompted mankind to commemorate for the seventieth time today, that of Stalingrad, it began under the code name "Fall blue" on June 28 from the area east of Ukraine down the Donetsk to Rostov-on-Don.

The failed 1941 onslaught against Moscow had cost the German Nazi Army a third of its strength. For this, in the summer of 1942, in the south, a third of the total front, they had massed all available forces.

Has the end of 2.2.1943 already been recognizable, at least in retrospect in June?

In other words: which side attacks - in the horoscope, which defends?

Here is the daily picture: 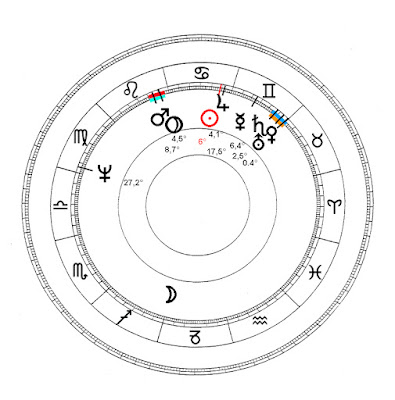 6. 28. 1942 at noon at the Don river
Let's start with the last question: who is attacking?
The answer is surprisingly simple, because the responsibilities in the zodiac are precisely regulated: Mars, the attacker and his prey jump, and Pluto with the brain networks of the German offensive plans - both in conjunction in the lion kingdom of predatory carnivores. And the Sun – what a picture - as the unlimited ruler of the Lion in time with Jupiter. The god of travel together with the sun in fiery expansion.
But Luna, the changeable ruler of Cancer, does not move at all into worlds that like to see devotion to one's own and the displacement of the stranger: Luna changes at noon from the sign of reconciliation Sagittarius to the sign of Capricorn, which, like the polar winter and the high mountains, knows no mercy with immoderate, no matter which direction.
Conclusion: Great day for an extended offensive ... but: the basis of the whole from the ruler of Cancer: Moon is not at home, but far away, on Sagittarius paths ... and exposed before the evening in Capricorn under God's sky to lose everything.
Is this thought tenable? Does Moon, as the ruler of Cancer, have this power or impotence to accept the stripping of everything? The step from Sagittarius to Capricorn is always the step beyond the time wall, stripping away everything temporal.
Let's move on to the second question, who is defending?
Venus is always in demand here with its strategies of massaging the herbivores. Venus has just left the fortifications of Taurus and is now moving in the open spaces under the sign of Gemini.
This is clearly consistent with the fact that the Red Army essentially moved to the rear, thus preserving its fighting power, until finally, with its back to the Volga - behind it the steppe - further retreat was no longer possible – the center of this situation was called Stalingrad.
Venus is flanked by Uranus. What does this mean?
Not this one, is it? Everything winged, angels, ideas, airplanes – the latter in large numbers had the swastika on the tail unit. 'Uranus lifts up Venus' meant this, and accordingly it was the metal birds of prey with the swastika above the battlefields that, in swarms of a hundred and more, inflicted heavy losses on the defenders when they were able to prevent the German army from taking Stalingrad "out of the movement" at the beginning of September.
If the Germans led "their" Uranus into battle in the form of winged aluminum and steel, Uranus helped the Russian side to an ingenious strategic idea, the code name of which, it is hard to believe, was "Uranus".
On September 12, a meeting was held in the Kremlin about the situation in Stalingrad, which was now in the stranglehold of the 6th Army, between Stalin, Zhukov and Vasilevsky.
"What does the Stalingrad Front need to liquidate the corridor and unite with the Southern Front?" Stalin asked.
"To do this, it needs at least a complete army, a tank corps, three tank brigades and at least four hundred howitzers. In addition, at least one air army must be additionally concentrated there during the operation“.
Vasilevsky unreservedly agreed with my calculations.
Stalin pulled out his map with the reserves of the headquarters and looked at it for a long time. Vasilevsky and I moved away from his table and quietly talked about the fact that, apparently, one had to look for a completely different solution.
"What 'other' solution?" Stalin asked, raising his head.
I never thought he would be so sharp eared. We stepped back to his table.
Go to the General Staff and think thoroughly about what to do in the Stalingrad area. What kind of troops and where to take them to reinforce the Stalingrad grouping. At the same time, think about what we can do on the Caucasus front. Tomorrow at 24 o'clock we want to gather here again.“
G. K. Zhukov, Memories and Thoughts Vol. 2, Berlin 1987, p. 84.
"Uranus", the "other solution", then became reality two months and a week later at 7:30 (Zhukov, p. 111) on November 19. 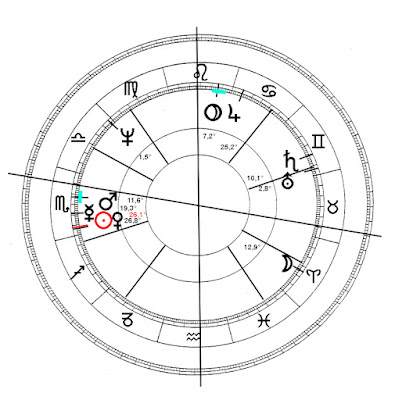 11.19.1942, 7:30 Stalingrad,
"Operation „Uranus“,
Encirclement of the german  6. Army
Sun conjunction Venus, in Scorpio, in the spider world enclosure, entrapment.
Here Venus takes over the defense, the initiative and in the 1st house she prevails with massaged forces, united within the framework of a plan = Scorpio.
Pluto = Plan / square Mars = attack. There we have it again, the couple. On June 28 in conjunction in Leo, on 19.11. in the square from Leo to Scorpio.
And the Germans in the horoscope?
Both sides share the place. Both sides have gathered the firepower of Mars, the intelligence of Mercury, the leadership and the resources under the sign of the Sun and Venus in the same place.
Who does heaven "help"? The answer can only be: the side that has the plan of containment, of integration, from which "Uranus", liberation, emerges, as the horoscope shows it in the 7th house, as an encounter.
The following picture shows which resonances of which world elements have moved in this action: 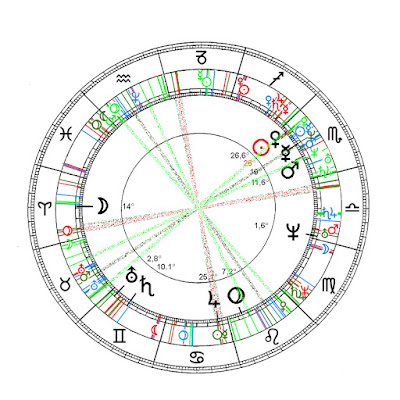 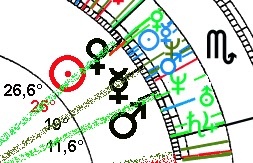