The Self-Criticism of an Astrologer and the Sovereign Retreat

I'm now about eleven months beyond 80. Two days befor my birthday Vladimir V.  ('Ruler of Peace' ~Frederick) Putin held a speach at night to his people and the world. Hours later, at 3:40 local time  commenced the common SMO of troops of Russia and the two People's Republics. 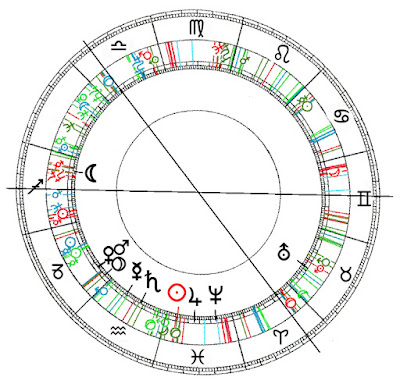 Uranus in 4
the liberation of the soul
other display 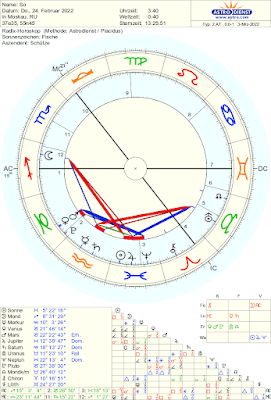 Now in truth the 'War of Aggression' has errupted at

with the victory of Wash.DC on the Maidan

Since then Kiew is ruled by the US - Embassy

"Jatsenijuk is our man' phoned the vice secretary of

US-State Department, and "fuck the EU"

Anything since followed out of that 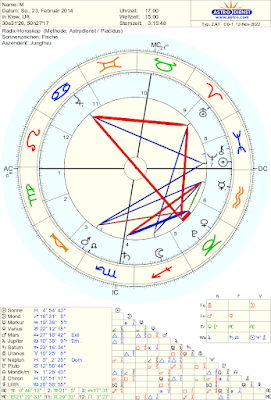 My political 'Damascus'  followed shortly after the 23. of February, when I learned that the first or  second law from the Rada prohibited the use of the Russian Language in official communication.

But language is soul, interdict of the Russian soul. Soul-prohibition lasly we had in the German Nazi Reich. Appalled and shocked I was, that nobody  took notice and reacted.

Since the the stunning experience, that we are 'gleichgeschaltet', entirely without 'Reichs-Propaganda-Ministerium'  and Gestapo. A totalitarian society and nobody realizes it.

Man in the West has become malleable and so has become his moral. We are the good, the Russia is bad, the White House is always right. Therefore 'the Russian' is downright necessary, as  ' the Jew' nowadays is a no-go.

Now, last week we had the new great tripple-square and in the approach I was naturally full of speculation and expectation of a Sun /Mercury/Uranus/Saturn square/ opposition, which has with Mars in Twins it's offensive moment, signifying  complex  intensity in heaven and on Earth.

But as we know and how i happens still again and again, we project our own unconscious psychic background into what we don't know, in this case my own one: 'the entire potential marching forwards'.

" the almost  unsurmountable  propensity, [...]  to fill
the inevitable gaps  in  our   comprehension
by projections: by the assumption, that our thoughts
also are those in our counteropart."
C.G.JUNG, Coll. W. XVIII/1, § 506

Nor the 'historical offensive moment' proved as the civile and military evacuation of the right bank of the Dnepr, given the looming catastrophic flood  due to the blasting of the Dnepr-dam at Kachova. Instead of attack evacuation, instead of forward back, a full error of interpretation.

After the onset of the events the error of interpretation is clearly  obvious.

What I didn't evaluate: the active Soul- and world-moment: Sun, Mercury plus Venus's ressouces are moving in Scorpio.

One knows all that, but then the own projection encounters nevertheless. At least the man of the astromundane diary can become conscious of his projection. With me it happened, when I after the  event happened to remember 'Batka', russian Grandfather,  whom I referred to in the piece "Mega-Batka moving" od early July 2014. There was ist, the waiver-, retreat-constellation.
And here the most prominent  retreat in history, the decision of Gen. Kutusow on the military council at Fili on 18. 9. 1812,  to withdraw the Russian Army behind Moscow: Pluto opposition Mercury. 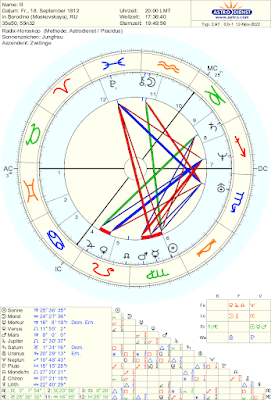 And now, 45th week 2022: all three, Sun/center, Mercury/intelligence, Venus/ressources: they astrologicly cannot but do like Pluto in Capricorn allows: so, governmental  withdrawl for the center, it's people and troops. 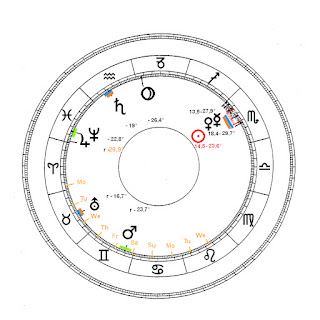 Highly amazing, these paralleles again and again of heaven and Earth.