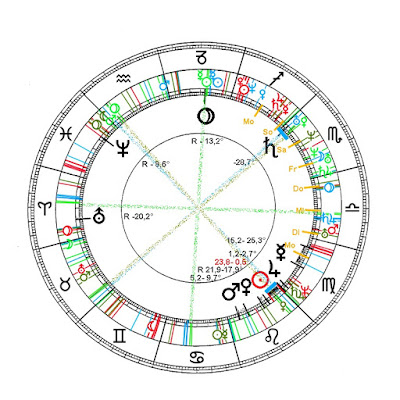 
If the chronicler carries didactic hopes in his chronic, so he isn't allowed, to - literally - speak to the point, he only may say things, which are right beside it, or for my part encircle the point, but to hit the point ... no - because in such way the learner is invited to do the last step him- or herself, by doing to reach the point  by oneself.

So the hindrance becomes to a tool at the mountains of time.

And the northern hemisphere  carries on it's voyage of  this summer through the year under the Virgo-Sun .
Sun in Virgo ads the soberness of Mercury to the central squander of the feeling heart.
It is the Sun-like sovereignty of Virgo about the costs of life anytime which allows her to present to Libra-Venus the eternal sister-present: to mirror each other at the descendant of the zodiac.
And just this week it is allowed to Mercury, to travel this place in the zodiac, where the 1 unites with another 1 to a 2.
Venus delighted, Mercury caring to a common win -win.

Sun this week in the squander of reason in the light of the wishes to live communicates a lot of resonances:


And aside from the human clumsinesses the gods let us realize how paradoxes are handled by spirit.
And the horoscope shows, which gods with which and when.

Therefore we go on with Sun:
The next in the line for Sun-visit is Jupiter this week in the early grades of Virgo. Jupiter and Sun unitedin conjunction = the hot life and the lofty son - in Virgo = will and dispensation, conciliation of the hearts.
On the heart-level: the week of conciliation in this year.
Underlaying to that is, what happens in Leo, what is claimed:  attempt to conjunction of Mars and Venus
at the outset of next week - claimed are attack and defense as well as attack and falling in love - altogether - the classical conjunction ...

But that is not enough, all these have been resonance-paradoxes on the level of the actual week.
There is also the fact of those visits, Sun will be paying to our aeon according to the Kings-conjunctions in the four elements:

- there is for one the part of the earth-element: the olive-colored Saturn/Jupiter-conjunction of 1802, waiting at 5,1° Virgo for the annual visit of the light therewith the borders of the solid element be cause for the meditation of the firm in it's paradoxes.

- and the "red" Neptune of the fire-element at 8,6° in Virgo as well as it's paradox counter light of the
olive-coloured Pluto at 6,8° Pisces.

So far Sun, and Mercury pays his visit here: olive-coloured Uranus of the earth-element, constituting together with the "red" fire-Mars at 4,1° Libra the "Grandola-Constellation".
So: from Leo until Scorpio drama, a soul-week again, while all is quiet in the other signs.
And there over glides - visible at night Moon - and talks into the dreams  of gods and men ...

Today at the beginning of the week till Tuesday noon Moon still travels under the understanding Sagittarius
then till Thursday noon under the severe Saturn, who keeps the borders in terms of: "of nothing too much"

But then till Saturday noon everything stands on it's head or hangs from a tree and speaks in our dreams strange when Moon travels under the Aquarius
follows the journey of Moon under the Pisces which are dwelling in our dreams in the depths and down there have the knowledge of beginning and end with which every child is borne.

*
And the younger sister of Astrology, Psychology, about dreams, gods, archetypes, times and signs:

"The archetype is neither god nor bad. It is a morally indifferent numen, which only by the collision with the consciousness becomes to the one or the other or the contradictional twoness. This decision to the good or the evil is deliberately or unwittingly brought about by the human adjustment. There are a lot of such prefigurations, but all of them abstain to appear in the dreams of the individuals and in the works of art, unless they are agitated by the deviation of the consciousness from the median way. But if the consciousness goes astray into a one sided and therefore wrong attitude, so these "instincts" are enlivened and  they send their images into the dreams of the individuals and the visions of the artists and seers, to thereby restore the mental balance."