Second Take: Donation in the Second Hous of the Soul 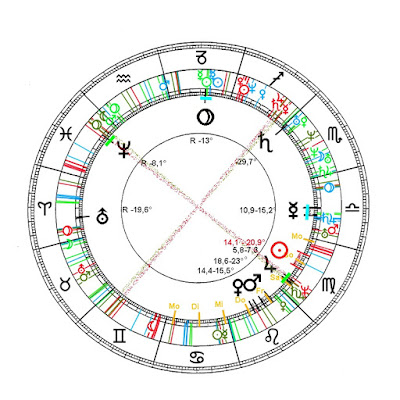 
9.9.2015
The psychic apparatus, so C.G.Jung teaches, fills every nescience up with "knowledge". This "knowledge" is called "projection".
If the beam of consciousness radiates into the dark, the cat's eye of the projection lights up in front of the common background of all things.
As this is a unconscious, quasi automatic instance, our consciousness has no knowledge of it.
We automatically take our projection of the world  as the World.
What helps? Jung: Withdrawal of the projections by true knowledge.

Mundanomaniac believes that true knowledge is only  owed to research, if it
steps at the side of experience.
The zodiac is the great extra-asian projection of the transcendent
background of things.

The collective unconscious seems - as far as we are allowed a judgement anyway - to consist  of something like mythological motives or images wherefore the myths of the people are the actual exponents of the collective unconscious. Plainest we perceive this at the starry heaven, whose chaotic shapes have been sorted by image-projections. Thereof the asserted starry-influences are explained: they are nothing else an unconscious introspective perceptions of the actions of the unconscious. As like as the constellation-images have been projected at  heaven, such like are similar and other figures in legends and fairy-tales or on historical persons projected."

Here again only generations-long research helps to lastly remove or confirm the projection of the background of the outer and inner world. 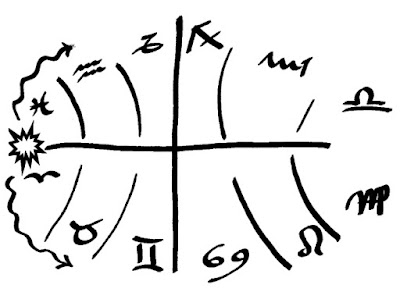 And now a glimpse into the broken week:
after some consideration:

Leo - Virgo - Libra are the places on the current zodiacal stage
where the time just is being filled with players of different echelons
there are - Leo until Libra - three of four layers of soul.


The soul likes drama
the Bavarian - to me the soul-man among the Germans -
have a saying: "there has to be some stirring"
and since August 10th
all three fire lights/planets
Mars Sun and Jupiter
are in the first three of four soul-signs
each being responsible for that
there is some stirring

be it then
the western virus had a maritime entrance
into the east
but in that way the eastern anti-virus
has a continental entrance into the west.

Back to heaven
in the language of the earth:

Expressionism of Leo in Mars' and Venus' realms
Virgo's prudence in Jupiter's realm
and the glimpse for the whole in the detail
and in the central realm of Sun
and the regulations of love of Mercury in Libra.

or so:Virgo harbored two expressionists or
fire-gods
or intruder
Jupiter and Sun's
heart-fire enough to squander
and spiritual fire of the donator and coming king.
Benevolence and donation.

and
Mercury square Pluto
Mercury the urbane moves this week through the resonances
of the names on the tombs of the fathers
at the side of the consort
and, less poetically, there are interruptions to be  expected
in the means of communication cause the floor from which Pluto resonances emerge
is Capricorn and his ruler Saturn severs the remaining out of the temporal.
Thus living Saturn is living the beyond.

and donor and coming king  and Sagittarius
Jupiter
whose mirror on earth is the the Moon-ruled lap of the Virgo
in the sign of Cancer
I say Jupiter
moves these two weeks through the resonance of opposing Neptune.
Son and Sagittarius in opposition with child and wise old man.

Sentence and opposite are due as condition of wholeness.
Two halves together
Reason and thrust.
Care and devotion.
Prudence and chaos likely to deliver new order.
And in experienced mirrors the heavenly like to enjoy those due acts.
And some of us might be free enough to join in.
That is my faith - that one may know.
Unlimited thrust and final consideration means Pisces in both of the directions of the zodiac.
And in Virgo the heavenly Venus might find her mirror in the earthly sister.


and Moon partakes after Wednesday the lower soul-world
-  Leo and Virgo -
while the appearance in the upper part only
belongs into the mirror of coming week.

But today (Monday) till Wednesday morning the soul is at home in the maternal lap out of which she awaits to be woken.